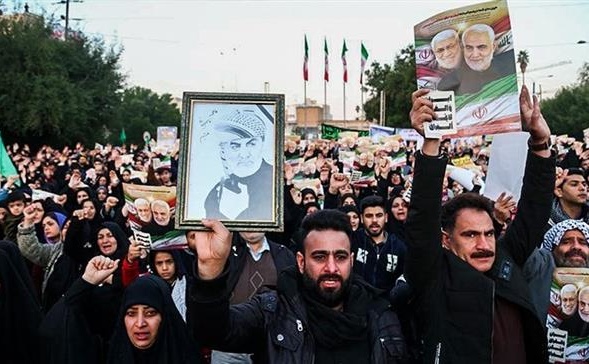 Tens of thousands of people have gathered in Iraq and across Iran for the funeral procession of Maj. Gen. Qassem Soleimani, assassinated in a US airstrike on Friday.

Processions moved through Iraq’s capital Baghdad and the holy cities of Karbala and Najaf on Saturday, commemorating both Soleimani and Abu Mahdi al-Muhandis, the head of the Iran-backed Iraqi militia Kata’ib Hezbollah.

Kata’ib Hezbollah’s rocket strike on December 27 on a US position near Kirkuk in northern Iraq, which killed an American contractor and Iraqi personnel and wounded four US troops, provided the rationale for the assassination of Soleimani and Muhandis.

Iraq Prime Minister Adel Abdul-Mahdi and Iraqi commander Hadi al-Amiri, the head of the Iran-backed Badr Organization, and senior cleric Ammar al-Hakim — also supported by Tehran — were among the mourners.

Soleimani divided opinion in Iraq, amid mass protests against the Government in recent mohths. Militia supporters and other Iraqis hailed him as the leader of the effort to defeat the Islamic State, but many demonstrators have criticized Iran’s influence over the Government.

Amiri says, over Soleimani’s coffin: “The price for your pure blood will be the American forces leaving Iraq forever.”

While considering its response to the assassination, the Iranian regime is hoping to present the processions as resistance to the US and a show of the Islamic Republic’s unity, only two months after mass protests that were repressed at the cost of hundreds of people killed.

The ceremonies began on Sunday in Ahvaz in southern Iran. Mourners dressed in black gathered in Mollavi Square, holding flags in green, white and red — the blood of “martyrs” —and portraits of Soleimani.

The general’s body will then be taken to Mashhad, Iran’s second city. On Monday, the procession will move through Tehran before Soleimani is buried in Kerman in southeast Iran.

The regime put out more pledges of retaliation for Soleimani’s assassination on Saturday, while seeking support from states across the Middle East.

The martyrdom of General Qassem Soleimani has made our people stronger and more determined than ever….The Americans will bear the full responsibility for the consequences of this terrorist act in the region and Washington will pay a heavy price for it.

Claiming the US had “entered a new path that can be very dangerous for the region”, Rouhani appealed for “close negotiation and cooperation between friendly countries”.

He pointed to the processions, “I hope that the glorious funeral held by the Iraqi people, and the one that is going to be held in Iran, will make America understand what a grave mistake it has made.”

The Americans wrongly thought that if they eliminate Martyr Soleimani and Martyr Abu Mahdi, their problems will be solved, but certainly, the problem for Americans and the Zionist regime will be far greater than in the past.

In fact, after this terrorist move, the United States should expect far heavier and deeper blows than ever.”