Iran Daily: Regime’s Cautious Response to Attack on US Embassy in Iraq 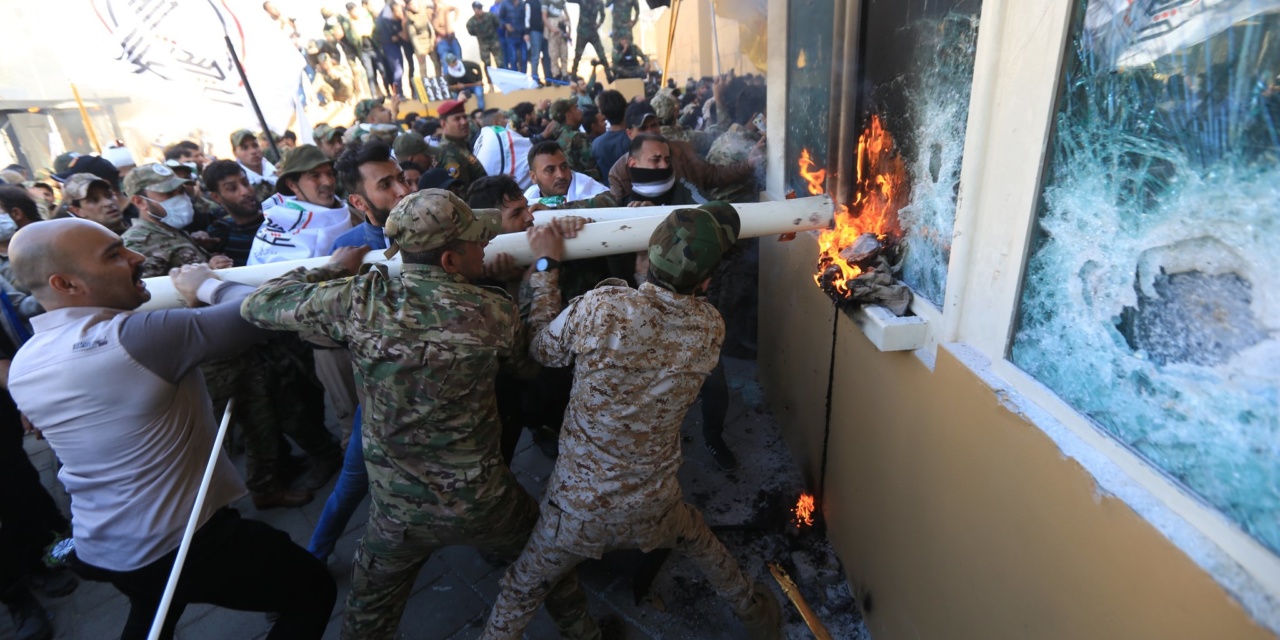 Supporters of the Iraqi militia Kata’ib Hezbollah break windows in the compound of the US Embassy, Baghdad, Iraq, December 31, 2019 (Murtadha Sudani/Anadolu/Getty)

The Supreme Leader lashes out on Twitter at “that guy” — Donald Trump — over the US strikes on an Iran-supported Iraqi militia over Trump’s accusation of Iranian support for an attack on the US Embassy compound in Baghdad.

That guy has tweeted that we see Iran responsible for the events in Baghdad & we will respond to Iran.
1st: You can’t do anything.
2nd: If you were logical —which you’re not— you’d see that your crimes in Iraq, Afghanistan… have made nations hate you. https://t.co/hMGOEDwHuY

Ayatollah Khamenei continued, “If the Islamic Republic decides to challenge & fight, it will do so unequivocally. We’re not after wars, but we strongly defend the Iranian nation’s interests, dignity, & glory. If anyone threatens that, we will unhesitatingly confront & strike them.”

Khamenei, repeating the false accusation that Washington “created” the Islamic State, said the US strikes were revenge on the Iranian-backed militia Kata’ib Hezbollah and Iraq’s Popular Mobilization Units for defeating ISIS.

ORIGINAL ENTRY: Iran’s regime has put out a cautious response to Tuesday’s attack on the US Embassy in Iraq, by supporters of an Iraqi force including a Tehran-backed militia.

The PMU said at least 25 Kata’ib Hezbollah fighters were killed and 51 wounded. Reports said four commanders were among the slain.

On Tuesday protesters entered the heavily-protected Green Zone in Iraq’s capital Baghdad. They broke into the US Embassy compound and set fires. The demonstrators withdrew but then joined thousands chanting “Death to America”, throwing rocks, and covering walls with graffiti.

“US Blaming Iran for Protests”

Iran Foreign Minister spokesman Abbas Mousavi criticized the US on Tuesday while avoiding an endorsement of the attack on the Embassy compound.

“The surprising impudence of the American authorities is at such a level that — after slaughtering at least 25 people, wounding many Iraqi people, inflicting financial damages on Iraq and violating the country’s national sovereignty and territorial integrity — they are now blaming the Islamic Republic of Iran for the protests from the Iraqi people against their own ferocious measures. [This is] a blatant and cheap act of pinning the blame on others.

Mousavi made no reference of the role of the Quds Force, the Revolutionary Guards branch operating outside Iran, in Kata’ib Hezbollah or in the Popular Mobilization Units, formed after the Islamic State took over 1/3 of Iraq in 2014. Nor did he mention that many of those in Iraq’s mass protests this autumn challenged Iran’s political and military influence in the country.

Instead, he continued to assail the US:

On the one hand, the Americans have ignored the Iraqi nation’s liberality and pursuit of independence, and on the other hand, they have forgotten their role in supporting Saddam and in creating Daesh [the Islamic State] and the consequent massacre and depredation of the Iraqi people.

They have apparently failed to remember that they are still deemed by the people of Iraq to be “occupiers”.

Iran’s Ambassador to the UN Majid Takht-Ravanchi claimed, “America’s anti-Iranian accusations are made to divert attention from the recent brutal killing and also from 17 years of occupying Iraq which has resulted in the killing of more than 300,000 innocent Iraqi people.”

He said that the “Popular Mobilization Units and its branches are a purely Iraqi group which is active under the control of Iraq’s democratic and legitimate government”.