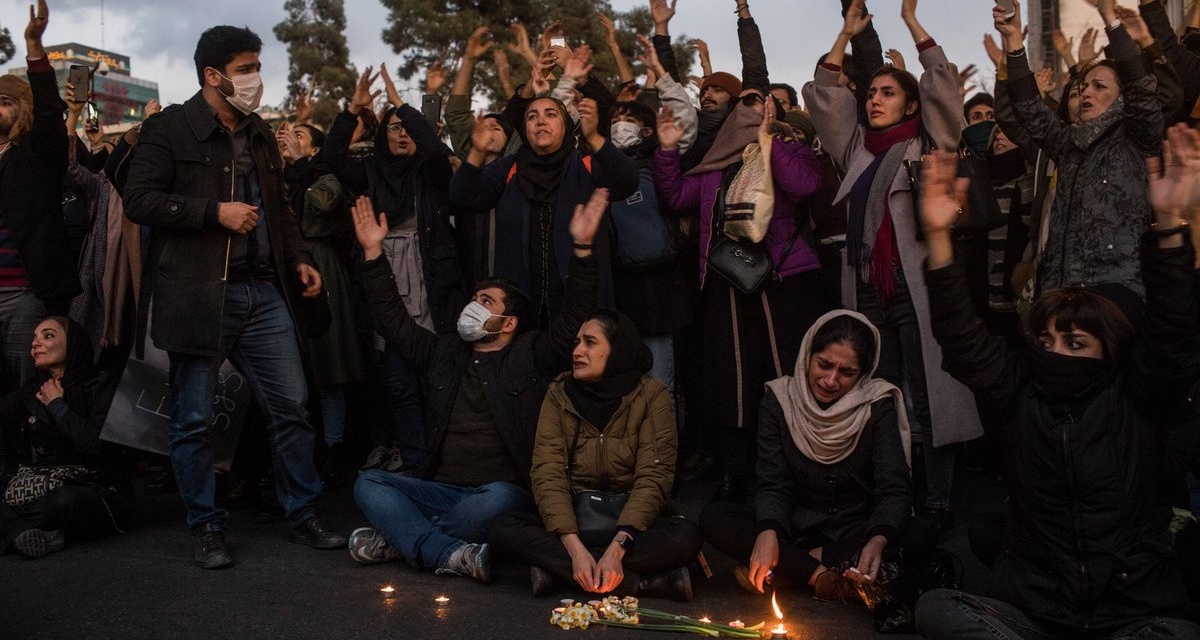 Iranians mourn victims of a Ukrainian jet downed by Iran’s military and protest against the regime, Tehran, January 11, 2020

Activists says protests are continuing in Iran, with riot police deployed in parts of Tehran to contain the demonstrations.

Videos on social media showed the police massed on motorcycles in public squares and lining the entrances to,Tehran University. Tear gas was reportedly used to clear the streets, with footage of protests in the capital and other cities such as Isfahan.

“They are lying that our enemy is America, our enemy is right here,” chanted protesters outside another university in Tehran. Vigils were held in several locations for the victims of the Ukraine passenger jet shot down on Wednesday by an Iranian anti-air defense position.

Pro-regime demonstrators gathered outside the UK Embassy, demanding its closure, after British Ambassador Robert Macaire was detained for 30 minutes on Saturday evening as he left a vigil outside Amir Kabir University.

Thanks for the many goodwill messages. Can confirm I wasn’t taking part in any demonstrations! Went to an event advertised as a vigil for victims of #PS752 tragedy. Normal to want to pay respects- some of victims were British. I left after 5 mins, when some started chanting.

ORIGINAL ENTRY: Iran’s regime is facing a national and international backlash over its coverup of the military’s downing of a UKraine passenger jet oh Wednesday, killing 176 passenger and crew.

Yesterday the Government and military finally admitted that an air defense crew had fired missiles which exploded near Ukraine International Airlines Flight 752 soon after it took off from Imam Khomeini Airport outside Tehran.

President Rouhani and Foreign Minister Mohammad Javad Zarif offered condolences and apologies, and officials throughout the system — Rouhani, 1st Vice President Esh’aq Jahangiri, Parliament Speaker Ali Larijani, and judiciary head Ebrahim Raisi among them — promised an investigation. The head of the Revolutionary Guards’ aerospace division said the military had jeopardized its reputation with the incident.

But by Saturday afternoon, protesters had gathered in Tehran, especially near Amir Kabir University, to vent their sorrow and anger with the regime. Demonstrators chanted “Down with the liars” and “Resignation is not enough. Prosecution is necessary”, including the Supreme Leader in their calls for departures from rule.

Other Iranians spoke to Western media about their mourning — around 130 of the passengers were citizens of the Islamic Republic — about their concerns. Mira Segaghati said from Tehran, “They were so careful not to kill any American in their revenge for [assassinated Gen. Qassem] Soleimani. But they did not close the airport? This shows how much this regime cares for Iranians.”

The public display was acknowledged by official and semi-official Iranian outlets. Fars, the outlet of the Revolutionary Guards, wrote of several hundred protesters while deriding them for supposedly ripping up posters of Soleimani, the head of the elite Quds Force who was killed by a US drone strike on January 3.

The Iranian Students News Agency headlined, “Students and People Gather to Sympathize with the Families of Ukrainian Plane Victims”. Deep in the story, ISNA reported:

Demonstrators chanted slogans addressing officials responsible for the incident and demanding their resignation. The rally also shouted slogans about how the event is being reported.

Protests erupt against the Revolutionary Guards at Amir-Kabir University in Tehran due to authorities' incompetence and negligence after the recent plane crash that killed more than 176 people.

Some people had claimed Iranians were united after #Soleimani's death. Think again. pic.twitter.com/ILacRPomZv

We insist on a full admission of guilt. We expect Iran to conduct a full and open investigation, bring those responsible to justice, return the bodies of the deceased, pay compensation and issue official apologies through diplomatic channels.

The President and Vice President of Ukraine International Airlines pushed back the Iranian military’s claim that Flight 752 was above a sensitive military site. They said the Boeing 737 jet was on a normal course, which several aircraft had taken earlier Wednesday morning, and the crew had received no warning from Imam Khomeini Airport about a possible threat before the flight took off.

Iran’s Civil Aviation Authority was forced into another retreat, saying the plane had not strayed from its correct path.

UK Prime Minister Boris Johnson said Iran’s admission was an “important first step” that “reinforces the importance of de-escalating tensions in the region”.

In an extraordinary statement, Iran’s Ambassador to the UK Hamid Baeidinejad implicitly criticised his Government: “I conveyed the official findings of responsible authorities in my country that missile could not be fired and hit the Ukrainian plane at that period of time. I apologise and regret for conveying such wrong findings.”

Johnson echoed Zelenskiy and Trudeau that there must be a “comprehensive, transparent and independent international investigation” into the tragedy”.

Protests for the downing of #PS752 continue with this chant: “do not call me a seditionist, the sedition is you the tyrant.”