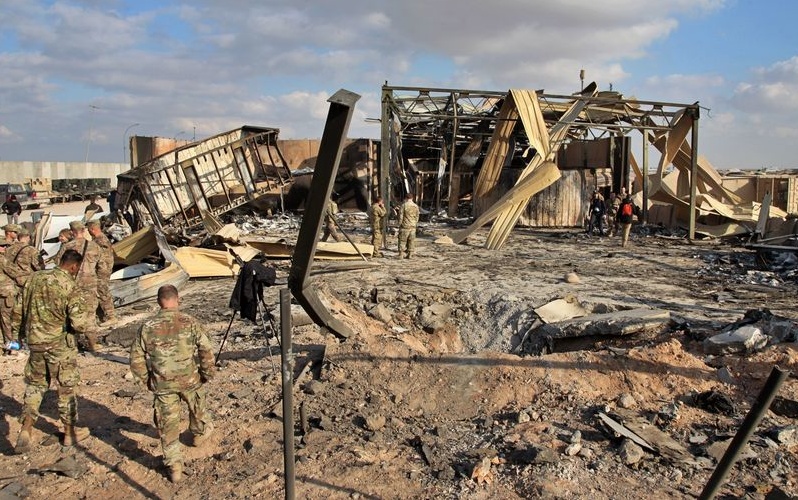 “Traumatic brain injuries” can refer to concussion, but the seriousness of some cases is indicated by 17 soldiers still under medical observation, according to Pentagon spokesman Jonathan Hoffman on Friday.

The Trump Administration initially said there were no casualties in the Iranian strikes on the sprawling al-Asad base in Anbar Province in western Iraq, and on another base near Erbil in Iraqi Kurdistan.

That pointed to a calibrated Iranian operation which fulfilled the Supreme Leader’s promise of a “slap in the face” after the US assassination of Maj. Gen. Qassem Soleimani on January 3, while avoiding an escalation of the military conflict.

Donald Trump immediately proclaimed that Iran had “stood down”, while events were overtaken by the Islamic Republic’s downing of a Ukraine passenger jet, killing 176 passengers and crew.

Trump has continued to play down the injuries, saying on Wednesday: “I heard that they had headaches, and a couple of other things. But I would say, and I can report, it is not very serious. Not very serious.”

There are about 1,500 US soldiers at the al-Asad base. With Iran giving prior notice of the missile strikes through Iraqi Prime Minister Adil Abdul al-Madhi, most troops were huddling in bunkers.

But a report by reporters touring the base, soon after the initial Administration denials of any casualties, pointed to injuries.

Hoffman said that eight of the 17 service members still under observation returned to the US on Friday. The nine others are in Germany “still undergoing evaluation and treatment there”.

The spokesman said the Pentagon’s revised account was because of symptoms that “are late-developing” and “manifest over a period of time”.

But implicitly acknowledging the error — or cover-up — in the initial US respnonse, Hoffman said Defense Secretary Mark Esper has ordered the Pentagon’s acting personnel chief, Matt Donovan, to review procedures for tracking and reporting injuries.

Esper had said on Wednesday, “This is mostly outpatient stuff. So we can track that if — if you’re really interested in it.”

He said he didn’t know the number of injuries, “I’m not a doctor and I’m not the ones evaluating them.”