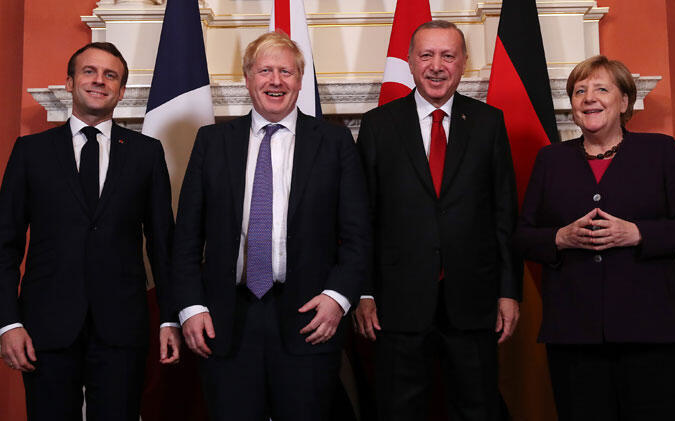 Returning from the NATO leaders’ meeting in the UK, Erdoğan told reporters on Thursday:

The allies should pay regard to Turkey’s concerns just as we took the security challenges of the alliance seriously. We expressed during the summit and in bilateral meetings that there cannot be an alliance without solidarity.

It was unfortunate to see that some allies continue their cooperation with terrorist organizations while emphasizing the struggle against terrorism at the same time.

Erdoğan did not name the allies, but the US troops are alongside the YPG through the Kurdish-led Syrian Democratic Forces, created in October 2015 to remove the Islamic State from northeast Syria.

Alongside anti-Assad fighters, Turkey took over most of the Kurdish canton of Afrin in northwest Syria in 2018. Last December, Erdoğan declared that the YPG must withdraw from a zone 480 km (270 miles) long and 30 km deep in the northeast. The areas extends along the Turkish-Syrian border across the Kurdish cantons of Kobani and Cezire, moving east over the Euphrates River to Iraq.

The Turkish President said up to 2 million of the 3.5 million Syrian refugees in Turkey will be resettled in the area.

On October 9, Ankara and anti-Assad fighters launched their cross-border offensive, taking a corridor between the towns of Ras al-Ain and Tel Abyad. Almost two weeks ago, Erdoğan and Russian President Vladimir Putin announced joint military oversight of the zone, with the Turkish President repeating the demand for YPG withdrawal.

In a phone call with Erdoğan on October 6, Donald Trump accepted the offensive and ordered the withdrawal of US troops. Defense Secretary Mark Esper announced on Wednesday that while 600 American personnel will remain in northeast Syria — some still alongside the YPG in the Syrian Democratic Forces and helping guard Kurdish-held oil and gas fields — they are outside Erdoğan’s “safe zone”.

Turkey had been withholding approval of NATO plans for the defense of the Baltic States and Poland, in the face of perceived challenges from Russia.

Erdoğan relented at the leaders’ meeting on Wednesday. A day earlier, French President Emmanuel Macron — as he, German Chancellor Angela Merkel, and UK Prime Minister Boris Johnson met the Turkish President — said there was no “possible consensus” with Turkey on which groups in Syria should be considered “terrorists”.

After the meeting, Erdoğan said the three European leaders will come to Istanbul in February. He explicitly linked his shift on NATO’s defense plans in Eastern Europe to his ambitions in northeast Syria.

Just as we take the security threats of the alliance seriously, all our allies should take our security concerns seriously. We focused on this. We also show that this solidarity cannot be realized without an ally. That is the need to be an ally.