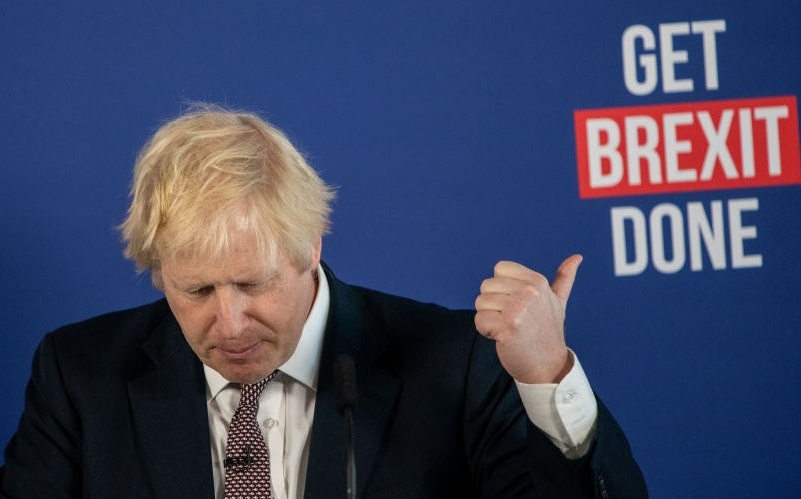 This UK General Election was predicted to be ugly, but few may have expected the tidal wave of the lies.

The opposition Labour Party has been challenged over its sums in a proposed, fully-costed £83 billion per year programme of investment in UK services and infrastructure. Leader Jeremy Corbyn has struggled with questions about rooting out anti-semitism within the party.

But these aren’t the lies.

The Liberal Democrats have played fast-and-loose with polling data in some constituencies after leader Jo Swinson’s fantastic claim that she could be the next Prime Minister.

Lies? Maybe. But not whoppers.

The tidal wave is coming instead from Boris Johnson, Priti Patel, Dominic Rabb and Michael Gove — the Prime Minister and leading ministers of the Conservative Party.

And this isn’t accidental lying. It’s deliberate: a strategy of diversions through falsehoods. While other parties, the media, and intellectually robust citizens are trying to clear up after the wave, other serious issues — which can be challenging to Johnson for a coherent answer, let alone a policy — have been swept away.

Brexit and Nothing But Brexit

The Conservative Party’s only clear strategy is the mantra “Get Brexit Done”, echoing Vote Leave’s “Take Back Control” in the 2016 referendum on European Union membership. The message is not only simple; it shifts any accountability — up to now and possibly in the future — away from the Government and to the dastardly “elite” Parliament and Remainers who supposedly stand in the way.

This is coupled with the carefully-orchestrated “alternative facts” fed into the echo chambers of friendly media such as The Telegraph; timid mainstream outlets who are not holding the politicians to account; and a loyal base on social media who try to control the narrative.

Conservative strategists see self-combustion in the 2017 campaign, when a sizeable lead in the polls at the start of the election turned into failure to achieve a Parliamentary majority, let alone a landslide. So this time they have deployed a triad of advisors — Campaign Director Isaac Levido, Director of Communications Lee Cain, and Johnson’s chief strategist Dominic Cummings, the man behind the Vote Leave Campaign — to implement the “Sling the Dead Cat on the Table” strategy.

Unlike 2017 with Prime Minister Theresa May, these advisors have a frontman in Boris Johnson who is willing to dissemble, divert, and lie for his self-interest.

Johnson says falsely that MPs refused to progress his Brexit deal. He declares falsely that the Government is committed to building 40 hospitals, rather than refurbishing six. He asserts falsely that his Brexit proposal puts up no customs barriers between Northern Ireland and Great Britain.

How Do You Sling A Dead Cat?

Outside politics, the term “dead cat” was coined for the introduction of a dramatic, shocking, or sensationalist topic to divert conversation away from a damaging topic. Imagine you are at a dinner party and the food is horrible, the chat is banal, and the house is falling apart. To save himself, your host may get an accommodating friend to sling a dead cat on the table. Now, rather than focusing on your gripes, you are joining the other guests in your disgust at the new conversation piece.

During the 2015 General Election, the tactic helped produce a Conservative majority after five years of coalition government. Each time Labour Party leader Ed Miliband announced a new policy, Tory-friendly media buried the news with photos of Miliband eating a ham sandwich or carefully-coded lines about the opposition leader: Miliband, having stabbed brother David in the back to get the leadership, might stab the entire country in the back by shacking up with the Scottish National Party and dropping his party’s support for the Trident nuclear weapons system.

Johnson, a journalist who was dismissed by The Times for plagiarism, understands how to play the game. In 2008, running for Mayor of London, he hired Levido’s mentor, the Australian media strategist Lynton Crosby, who came up with the strategy of dead-catting.

In 2013, Johnson wrote in the Daily Telegraph:

There is one thing that is absolutely certain about throwing a dead cat on the dining room table – and I don’t mean that people will be outraged, alarmed, disgusted. That is true, but irrelevant. The key point is that everyone will shout, “Jeez, mate, there’s a dead cat on the table!”

During the first televised debate between Johnson and Labour’s Jeremy Corbyn, even pro-Conservative commentators saw only a narrow win for Johnson and gave credit to some of Corbyn’s arguments. Johnson bumbled over his lines, many of them scripted, and Corbyn surprised his opponent by revealing documents about US-UK discussions of the future of the National Health Service.

But by morning the airwaves, newspages, and tweets were not paying attention. Instead, the main story was that the Conservative Party, during the debate, renamed their main Twitter account as “factcheckUK”. The logo was changed to hide political origins, and pro-Conservative material was pushed as objective observation. Of course, many people tut-tutted about the abuse of social media and “fact”, and Twitter issued a mild rebuke — but now people were no longer evaluating the issues and the performances of Johnson and Corbyn.

Joe Tidy, BBC News’ digital elections reporter, explained that Conservative Central Headquarters knew what they were doing: “The Tory social media team don’t give a damn how things look and court controversy….They know that Twitter isn’t ‘real people’ and is just a hornet’s nest of news geeks they can poke a rise out of.”

How Do You Fight A Dead Cat?

I asked seven intelligent, politically minded friends who follow British politics and have strong opinions to explain what they took home from the Channel 4 Environment Leaders debate where Johnson did not turn up. Only one watched live and told me the key environmental issues that were raised.

But all seven pointed to the “empty-chairing” of Johnson and Brexit Party leader Nigel Farage, with ice sculptures taking the place of the two men. They spoke about the media frenzy when Michael Gove and Johnson’s Stanley, in a planned “event” with a film crew, tried to get Gove into the debate but were turned aside by Channel 4.

New Labour, with its communications guru Alastair Campbell, built spin, message discipline, and burial of bad news. The Johnson/Crosbyites/Cummings strategy is the opposite: unashamed, brash, provocative, and pushing lies as truth — but to put the diversion, rather than the real issue, at the center of discussion.

The more loathing, the more shock the better. Airspace is dominated by reaction, emotion, fulmination, and the illusion of offense. The Conservatives’ core following is satisfied, and the message the opposition is nullified as it is forced into reaction.

With Donald Trump in the UK this week, bringing his own dead cats, Labour and other parties may have a further opportunity, warning about a US-UK trade deal threatening the NHS. But already the next dead cat has been slung.

Since last Saturday’s London Bridge attack, Johnson and Conservative ministers have politicized “terrorism”. Under pressure because of his avoidance of a tough interview with the BBC’s Andrew Neil, Johnson used a less daunting appearance — with the outlet’s Andrew Marr — to proclaim that he would lock away all “terrorists” for the full duration of their sentences.

Cue emotion, fulmination, and the illusion of offense, again pushing other economic and social issues off the stage.

So how to deal with this dark art which makes Machiavelli look like a saint?

The simple answer is don’t fall for the bait. In some cases, opposition parties have persisted with attention to the effects of austerity and the future of the NHS — the Scottish Nationalist Party, at a remove from the London media bubble, has been particularly effective. These are vital issues, but they are also emotive, forcing Johnson to distance himself from previous Conservative Governments: “I have been PM for six months not nine years.”

The dead cat strategy only works if people react to it. But up to the December 12 vote, can people hold their noses and keep talking about how horrible the food is – or even move outside and carry on the discussion?

Or do the dead cats, and the lies, win?