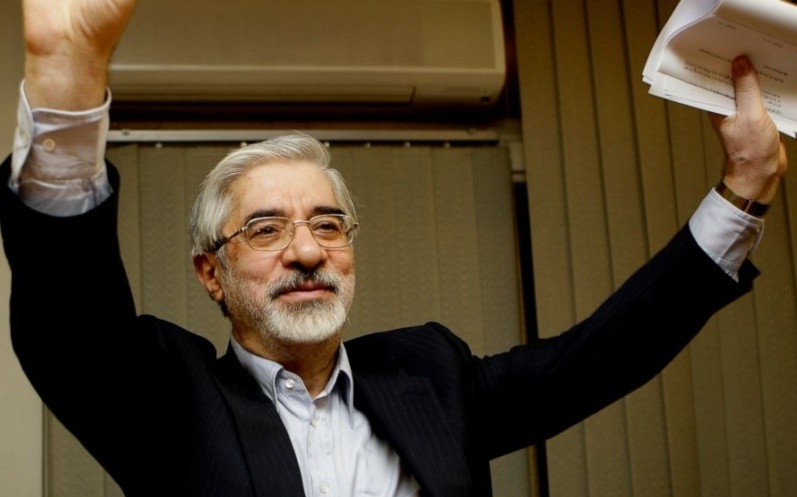 The leader of Iran’s Green Movement, detained for almost nine years by the regime, has issued a statement calling for killers of protesters to be identified and prosecuted.

Mir Hossein Mousavi, the leading challenger in the disputed 2009 Presidential election “won” by Mahmoud Ahmadinejad with the support of the Supreme Leader, has been under strict house arrest since February 2011. His wife — the artist, academic, and activist Zahra Rahnavard — and Mehdi Karroubi, a former Parliament Speaker and 2009 Presidential candidate, were also detained amid regime fears of a revival of the mass protests over the vote.

Mousavi wrote about the use of force against protesters, who rallied after the Government raised petrol prices between 50% and 200% in a midnight announcement on November 15. He said the repression was an “obvious crime” by
“agents and shooters [who] were the representatives of a religious government”.

The former Prime Minister did not spare the Supreme Leader, criticizing the “commander in chief…with absolute powers” who oversees the security forces.

Mousavi’s statement was published on Saturday on the Green Movement’s Kalameh website.

On Thursday, Karroubi wrote via Kalameh of the “indescribable violence” against demonstrators backed by the rhetoric of the Revolutionary Guards: “Nobody stops these people from uttering such stupid words, which will only increase the anger and hatred of the people.”

Amnesty International reported last week that at least 161 protesters were killed as the regime suppressed the demonstrations, and warned that the actual toll may be far higher. Iranian authorities have said more than 1,000 people have been arrested, with Kalameh putting the number at 7,000.

The Supreme Leader, President Hassan Rouhani, and other officials have proclaimed that violent protests were instigated by foreign powers, the relatives of the late Shah, and the “terrorist” Mojahedin-e Khalq Organization, which has sought the overthrow of the regime since 1979.

But like Karroubi, Mousavi pointed to the causes of unemployment, corruption, and inequality, saying the rallies “show widespread disillusionment among groups of society who are desperate over conditions prevailing in the country”.

He declared that the regime’s reaction was “completely similar to the pitiless killing of the people” by the Shah’s forces in the Zhaleh Square massacre in September 1978:

On Saturday the head of Iran’s armed forces, Maj. Gen. Mohammad Baqeri, continued the regime’s effort to cast the protests as a foreign scheme: “The enemies…had been waiting for an opportunity like the implementation of the fuel price reform plan to benefit from the wave of public dissatisfaction and to act against the security of the country.”

The general said it was “an undeniable reality” that the economic situation had created problems for Iranians, but he insisted, “The incidents of the recent day…were a plot that had been devised and orchestrated against the country.”