TrumpWatch, Day 1,042: Trump — I Wasn’t Involved With Giuliani Over Ukraine 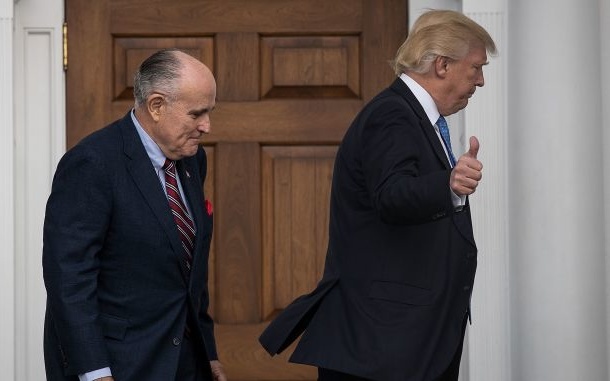 Changing his story, Donald Trump says he had nothing to do with his attorney Rudy Giuliani’s efforts in the Trump-Ukraine affair.

Under pressure in an impeachment inquiry, Trump tried a new defense in an interview with former Fox commentator Bill O’Reilly, posted on-line on Wednesday.

Trump insisted he did not direct Giuliani to seek Ukraine’s investigations to tarnish Presidential candidate Joe Biden and to cover up Russia’s interference in the 2016 US election.

Current and former US officials — including Ambassador Gordon Sondland, involved in the Trump-Giuliani effort — testified to the House Intelligence Committee this month that Giuliani was acting on Trump’s orders.

Sondland said that, when he asked Trump about Ukraine matters, he was bluntly told, “Talk to Rudy.”

Giuliani has made clear that he operated for Trump:

The investigation I conducted concerning 2016 Ukrainian collusion and corruption, was done solely as a defense attorney to defend my client against false charges, that kept changing as one after another were disproven.

But Trump said to O’Reilly:

You have to ask [what he was doing there] to Rudy. Rudy has other clients, other than me….[He] has done a lot of work in Ukraine over the years.

O’Reilly double-checked, “You didn’t direct him to go there on your behalf?”

Giuliani launched the effort for Kiev’s statement of investigations in November 2018, using now-indicted business associates Lev Parnas and Igor Fruman to set up meetings with current and former Ukrainian officials. The meetings continued until August, when a formal complaint over Trump’s July 25 call with new President Volodymyr Zelenskiy that sought the inquiries into Biden and the conspiracy theory that Ukraine, not Russia, hacked Democrat computers in 2016.

Trump told Zelenskiy in the call that he would send Giuliani and Attorney General William Barr to Kiev for further discussions.

Parnas said recently that Trump pulled him and Fruman aside at a White House Hanukkah party last year and told them to pursue the “secret mission” in Ukraine.