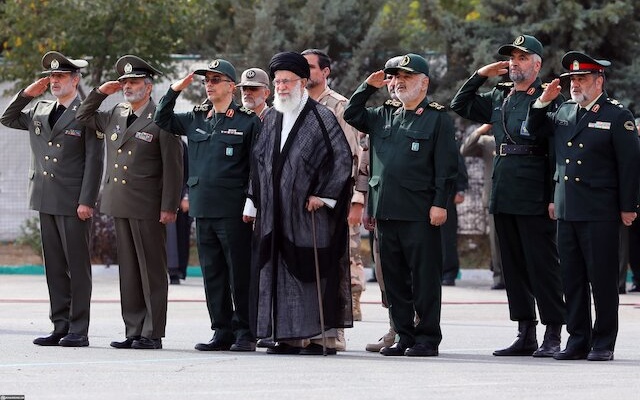 The Supreme Leader’s celebration of “victory” over protests was soon checked on Wednesday when Iraqi demonstrators stormed and burnt the Iranian Consulate in Najaf in southern Iraq.

The demonstrations in Baghdad and across the south have escalated for months. They have been spurred by complaints over unemployment, corruption, and the Government’s failure to deliver public services. However, as the rallies have grown, some protesters have vigorously denounced Iran’s influence in the country — even as Gen. Qassem Soleimani, the head of the Revolutionary Guards’ Qods Forces, led Baghdad meetings on how to quell any uprising.

Demonstrators removed the Iranian flag from the consulate and replaced it with an Iraqi one.

A police official said one protester was killed and at least 35 people wounded when security forces fired live ammunition to prevent them from entering the consulate.

Some staff had evacuated the building earlier in the day, and others escaped without harm.

Iran’s Supreme Leader has hailed the suppression of mass protests over rising petrol prices as a glorious victory over “enemies”.

Ayatollah Khamenei addressed members of the Basij paramilitary forces — a key element in the security response to the demonstrations — on Wednesday. He said anger over the Government’s reduction of subsidies, bringing an immediate surge in cost of 50% to 200%, was a pretext for a plot to destroy the Islamic Republic.

The enemies had spent a great amount of money designing this conspiracy and were waiting for an opportunity to implement it with destruction, killing, and villainy. They assumed that the matter of (the policies on) petrol was the desired opportunity they were looking for and brought their army onto the scene.

Khamenei cheered, “However, the Iranian nation quashed the enemy’s movement with its magnificent display.”

At least 143 people have been killed since the Government’s announcement at midnight on November 15, according to Amnesty International. Many of the victims were shot at close range by security forces. Some were shot in the back as they ran away. Bodies have not been returned to families, who have been threatened with arrest if they speak to the media, the human rights organization said.

The Supreme Leader intervened on November l7 as the protests spread, declaring that enemies such as the US, Israel, Saudi Arabia, relatives of the late Shah, and the “terrorist” Mojahedin-e Khalq Organization were instigating violence. Iranian authorities said more than 1,000 people were arrested, including 100 “ringleaders”, as scores of banks and Government buildings were burnt.

Khamenei played down any repression of the demonstrations, instead proclaiming:

The magnificent movement of the Iranian nation that began in Zanjan and Tabriz, even spread to some villages, and ended in Tehran was a hard blow to Global Arrogance and Zionism, forcing them to retreat.

Iranian leaders began declaring victory last Wednesday, with President Hassan Rouhani saying “armed insurgents” had been vanquished. But clerics and even military commanders have continued to express concern at the scale of the protests.

Citizen journalists and activists, including Amnesty, say the death toll may be far higher than 143. Victims are as young as 13.

Iranian authorities are not giving an official count, focusing instead on individual funerals of those allegedly slain by protesters.

Khamenei praised the Basij, implicated in reports of the killings, and said, “This week was truly the highlight of the Iranian nation’s magnificence and greatness. I thank the Almighty God and the dear people.”