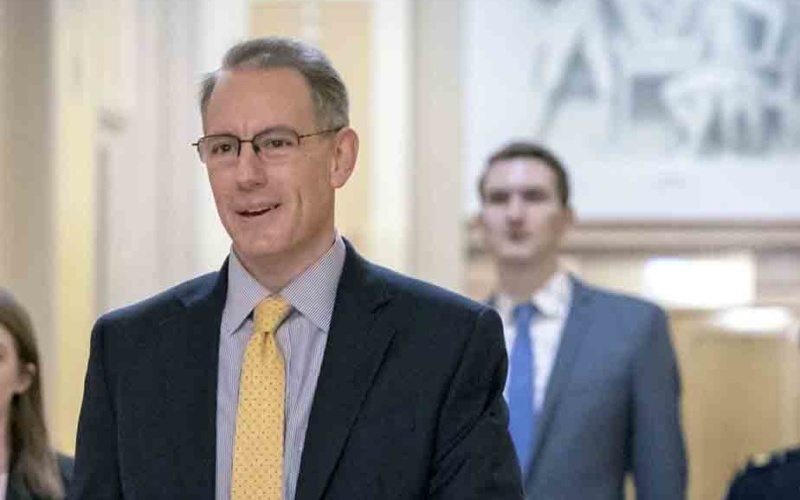 Two officials in the Office of Management and Budget resigned amid concerns about Donald Trump’s freezing of military aid to Ukraine, until Kiev announced investigations to tarnish Presidential candidate Joe Biden and to cover up Russia’s interference in the 2016 US election.

The OMB’s Mark Sandy (pictured) told the House Intelligence Committee in a closed-door session this month that one of the officials “expressed some frustrations about not understanding the reason for the hold” and the other offered a “dissenting opinion” about the legality of suspending aid authorized by Congress.

The transcript of Sandy’s testimony was released on Tuesday by the committee, which concluded public hearings last week. Legislators are now drafting a report for the House Judiciary Committee, which will consider articles of impeachment against Trump.

Trump ordered the freeze of $391 million in military assistance in July, two weeks before he spoke by phone with Ukraine President Volodymyr Zelenskiy.

Trump has loudly denied a “quid pro quo”. However, current and former US officials testified in the hearings that they concluded the aid suspension was pressure on Zelenskiy to make a public statement of investigations.

The aid was only unfrozen on September 11, two days after Congress was officially notified of the formal complaint by a CIA official over the July 25 Trump-Zelenskiy call.

“Two people familiar with the matter” said on Tuesday that Trump was briefed in late August of the complaint. The revelation undercut Trump’s defense that on September 9 he told Ambassador Gordon Sondland — a key figure in the campaign for Ukraine’s investigations — that he “wanted nothing” from Kiev.

Sandy said he was informed that the order to freeze aid came directly from Trump, learning of it in a July 12 e-mail from Robert Blair, a top aide to Acting White House Chief of Staff Mick Mulvaney.

Mulvaney, a former OMB Director, was Trump’s channel to implement the suspension. He waged an intense campaign to find a legal justification and deny a quid pro quo, generating hundreds of documents which may now be sought in the Trump impeachment inquiry.

OMB officials repeatedly asked superiors about the reason for the freeze, Sandy said, but they never got an answer: “It was an open question over the course of late July and pretty much all of August, as I recall.”

In August, OMB divisions wrote a joint memo recommending the provision of the aid as soon as possible. Sandy explained:

The assistance to Ukraine is consistent with the national security strategy…in terms of supporting a stable, peaceful Europe. Second was the benefit from the program in terms of opposing Russian aggression. Another argument pertained to bipartisan support for the program.

The concern over national security paralleled worries at the State Department, National Security Council, and Pentagon, outlined by the witnesses in the House Intelligence Committee hearings.

Sandy dated Trump’s consideration of the freeze weeks before the July order. He said Trump asked for information about the assistance on June 19, having read media reports that the Pentagon was sending $250 million in weapons to Ukraine.

Sandy is the only OMB official who defied the White House order to staff not to testify or provide documents to the House Intelligence Committee. Mulvaney, Acting OMB head Russell Vought, and senior political appointee Michael Duffey are among those refusing to appear.

But on Tuesday, Democrats on the House Budget Committee released a summary of OMB material. The legislators said Duffey’s claim of authority over aid disbursement was “a troubling deviation” from procedures.

Trump-Giuliani Pursuit of Investigations “Always Out There”

A senior diplomat overseeing Europe and Eurasia affairs, Reeker reinforced the accounts of other officials about the campaign of Trump and his personal attorney Rudy Giuliani for the statement of investigations into Joe Biden and his son Hunter, a board member of the Ukrainian gas company Burisma:

I don’t recall anybody mentioning the Bidens, per se. [But] you know, it was just one of those things it was always out there, because, of course, Giuliani was talking about it and the press was writing about it all the time.

Reeker also added to the testimony of officials’ concern about Giuliani’s disinformation to undermine the US Ambassador to Ukraine, Marie Yovanovitch.

Yovanovitch, seen as an obstacle to the Trump-Giuliani pursuit of investigations, was finally recalled from her post in May.