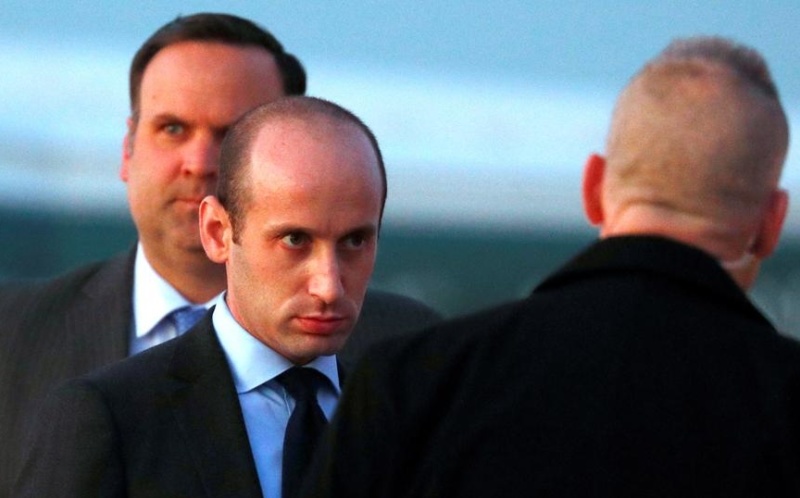 Legislators issue a demand for the resignation of senior White House advisor Stephen Miller, following the revelation of his espousal of white supremacy in 900 e-mails to the attack outlet Breitbart.

Only five years ago Miller was a 30-year hard-right activist spamming journalists and politicians with e-mails. But he grabbed Donald Trump’s attention as Trump’s warm-up act during the 2016 campaign. When Trump took office in January 2017, Miller became a key speechwriter and advisor and — after the departure of his mentor Steve Bannon — the architect of the White House’s anti-immigrant policies.

Last Thursday the leaders of the Congressional Progressive Caucus, Congressional Black Caucus, Congressional Hispanic Caucus, and Congressional Asian Pacific American Caucus issued a joint statement, after the Southern Poverty Law Center documented multiple instances of Miller’s vilification of people of color and immigrants in the communications in 2015 and 2016 with Breitbart — run by Bannon until he joined the Trump campaign and eventually became its campaign manager.

The chairs of the caucuses said:

It’s clearer than ever that Stephen Miller is a far-right white nationalist with a racist and xenophobic worldview. His beliefs are appalling, indefensible, and completely at odds with public service.

As documented by the Southern Poverty Law Center, Stephen Miller has embedded himself in white nationalist doctrine for years, including promoting racist propaganda from fringe sites like VDARE and InfoWars. And as the chief architect of the Muslim Ban and cruel family separation policies, Stephen Miller has spent the last three years turning his bigotry into policy — with President Trump’s blessing.

The e-mails were leaked in June to the SPLC’s Hatewatch by Katie McHugh, an editor for Breitbart from April 2014 to June 2017. Fired in 2017 over anti-Muslim tweets, she later renounced the far right.

McHugh said Breitbart editors introduced her to Miller, then an aide to conservative Sen. Jaff Sessions — later the Attorney General in the Trump Administration who implemented Miller’s “zero tolerance” policy. The editors said Miller could influence the direction of McHugh’s reporting, setting up e-mail exchanges and phone conversations.

HateWatch documents that more than 80% of Miller’s e-mails are on race or immigration. He repeatedly discussed crime through offenses by non-whites. On immigration, he was dedicated to severely limiting or ending non-white entry into the US.

Hatewatch says, “[We were] unable to find any examples of Miller writing sympathetically or even in neutral tones about any person who is nonwhite or foreign-born.”

Miller shared material from white supremacy outlet such as VDARE. Founded in 1999, the site promotes the “white genocide” or “great replacement” myth, in which non=white people systematically and deliberately remove white people from the planet.

Miller told McHugh that Mexican survivors of Hurricane Patricia, a record-setting storm in October 2015, could be given Temporary Protected Status in the US. Asked by the editor for a precedent, he sent a VDARE article with the conspiracy theory of the Obama Administration supporting replacement of whites by people from Latin America.

Miller recommended that Breitbart write about the racist novel The Camp of the Saints, by French writer Jean Raspail, a work popular among among white supremacists and neo-Nazis over its portrayal of refugees, white genocide, and great replacement.

The recommendation followed Miller’s portrayal of scores on high school aptitude tests falling because of poor and non-white students.

(On September 24, 2015, Breitbart’s Julia Hahn wrote a story headlined “‘Camp of the Saints’ Seen Mirrored in Pope’s Message”.Hahn is now an aide to Trump.)

Miller has led the Trump Administration’s restriction of refugees to 18,000 in the next fiscal year, with plans to allow state and local governments to block refugee resettlement in their areas.

In other e-mail exchanges with McHugh, Miller complains about the removal of Confederate flags by retailers after white supremacist Dylan Roof killed nine members of an African-American church in South Carolina in June 2015.

Responding to another mass shooting by a white supremacist in October 2015, Miller suggested that Breitbart emphasize he was of “mixed race”.

Chris Harper-Mercer, a student at Umpqua Community College, killed nine people at the Oregon school. Within hours, Miller e-mailed McHugh, “He is described as ‘mixed race’ and born in England. Any chance of piecing that profile together more, or will it all be covered up?”

McHugh sent Miller her story claiming Harper-Mercer was connected via social media to a supporter of Islamic terrorism. Miller replied, “Your eds need to make that the LEDE.”