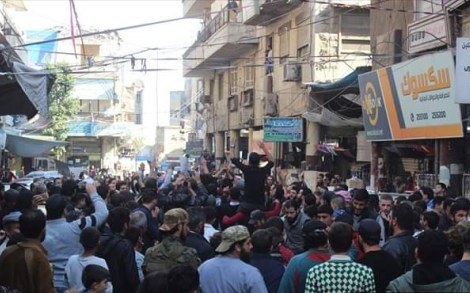 Claimed image of a rally in support of Kafr Takharim, the town in northwest Syria threatened with takeover by Islamist bloc HTS, November 7, 2019

A rally in Idlib city on Thursday, supporting the residents of Kafr Takharim against the Islamist bloc Hay’at Tahrir al-Sham:

Popular demonstration in Ma'aret al-Nu'man city in the southeastern countryside of Idlib in solidarity with the people of the city of “Kafr Takharim” and chanted against “HTS” and “Salvation Government” pic.twitter.com/KaEY0h9RTh

Pro-opposition outlets say an attempt by HTS convoys to take over Kafr Takharim in northwest Idlib Province, effectively suspending its local council, was prevented by protests on Wednesday.

Some unconfirmed claims even asserted that HTS fighters were killed and wounded in the town of 40,000, run by a local council which has refused to be taken over by HTS and its “Syrian Salvation Government”.

HTS holds much of Idlib Province after defeating rebel factions in 2017 and 2018. However, other parts remain outside its control, and residents across Idlib and neighboring western Aleppo Province have regularly protested against the bloc and the Salvation Government.

The clashes on Wednesday started, according to pro-opposition activists, when HTS began shelling Kafr Takharim and “several convoys” encircled the town. Opposition sites said at least three civilians were killed and others wounded amid “heavy machine gun fire” by HTS as well as the shelling.

In a pro-HTS version, “Insight Media” claimed that the Islamist bloc acted after the breakdown of an agreement between HTS, the rebel faction Faylaq al-Sham, and the local council over “issues” that included a group of residents damaging property and trying to “instill problems”.. The account maintained that the rebels had failed to ensure order, and “the Hay’at Tahrir Sham representative and his companions were exposed to small arms fire”.

Pro-opposition local sources said the dispute started when HTS tried to collect “zakat” (taxes) on bread, electricity, and the making of olive oil in the area. Residents said they would give their money to displaced Syrians, overtaking the religious argument of HTS that it was using the zakat to help the needy.

The Syrian Revolution Coordination Council called on all villages and towns in northwest Syria to demonstrate in support of the people of Kafr Takharim. It said HTS was “stealing people’s money on the grounds of false reasons”, as the opposition area was facing a six-month offensive by Russia and the Assad regime which has killed more than 1,000 civilians, wounded thousands, and bombed schools, mosques, markets, and about 50 medical facilities.

HTS is “a scourge of the revolution and the rebels, and the government of a faction, not a government of the people”, the Council said.

Video of a rally in Kafr Takharim on Wednesday night denouncing HTS: