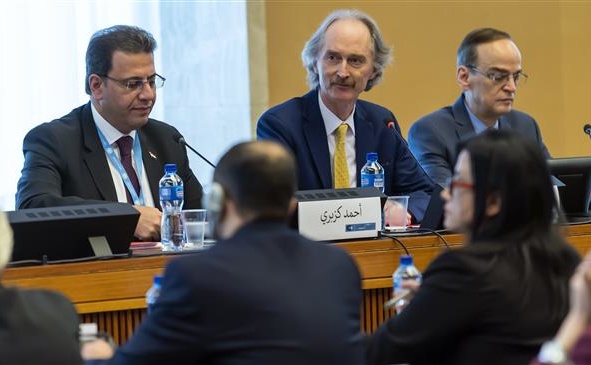 Political talks between the Assad regime and some representatives from opposition and civil society groups have opened in Geneva, Switzerland.

UN envoy Geir Pedersen, promoting the possibilities from a Constitutional Committee, said the discussion was “better than most people would have expected” with all sides acting professionally. Delegates were more reserved, talking about a frosty atmosphere.

The Committee was finally announced this autumn after almost two years, with the Assad regime objecting to any involvement from some opposition factions and saying that “sovereignty” must be paramount.

The talks will resume in Geneva on November 25.

In 10 days of preliminary discussions before Friday’s formal opening, the delegations agreed on a 45-member drafting body to write the draft constitution.

But the discussions reached no agreement on the release of thousands of detainees, a central issue after the killing or disappearance of tens of thousands of prisoners under the regime during the 104-month conflict.

And the regime may hold out against any new constitution, saying that a revision of its 2012 version must be adopted.

Speaking with journalists, Ahmad Kuzbari, co-chair of the panel for the regime, appeared on Friday to rule out any significant change.

We did not come to build a new state. The Syrian Arab Republic is a state: it has a constitution, a parliament, a government, an army and institutions.

Opposition and civil society delegates said regime representatives focused on “terrorism”, their term for many opposition groups and rebels.

Hadi al-Bahra — the opposition co-chair and President of the Syrian National Coalition in 2014-2015 — said, “Discussions were not very easy. We all had to be reasonable and go beyond the differences and to focus on the parts that unify Syrians.”