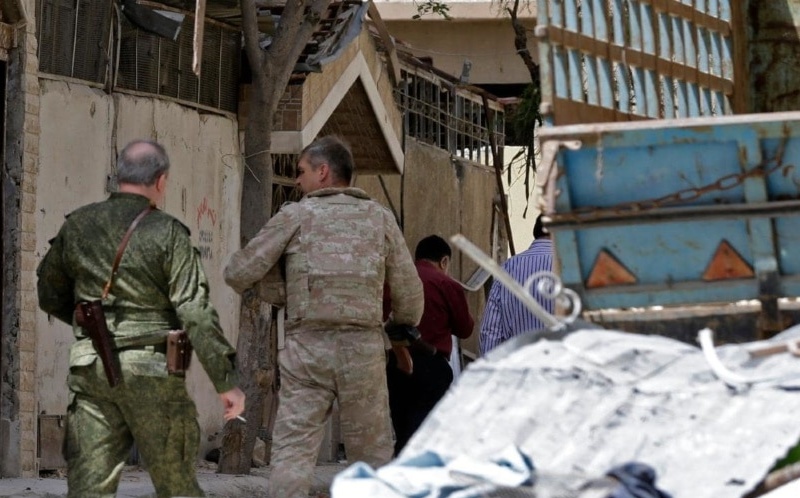 The head of the world’s chemical weapons inspectors has knocked back propaganda denying chemical attacks in Syria’s 105-month conflict.

The propaganda campaign has been propelled by Russia, which is seeking to undermine the Organization for the Prohibition of Chemical Weapons’ inspections of the attacks, almost all of which have carried out by the Assad regime. The campaign has been supported by pro-Assad activists, bloggers promoted by Moscow, and even a group of UK-based activists.

Since March, the distortion and misinformation has focused on an April 2018 attack on Douma, in the final days of a two-month Russia-regime offensive that forced the surrender of the last opposition area near Syria’s capital Damascus. The OPCW Fact-Finding Mission’s final report concluded that chlorine was likely used in an assault on a residential building. Witnesses said 43 people were killed.

The OPCW’s Investigations and Identification Team, mandeted by member countries in June 2018 to assign responsibility for attacks, is now considering nine incidents including Douma. Its first reports are expected in a few months.

Russia, the Assad regime, and activists have seized on the leaked dissent of an OPCW staff member from the FFM’s interim report of June 2018. “Alex”, in a presentation last month and then in a leaked e-mail, said his views were ignored as the report was bolstered over the possibility of the use of chlorine.

At the opening of the OPCW’s Conference of State Parties in The Hague on Monday, Director General Fernando Arias summarized:

the nature of any thorough inquiry for individuals in a team to express subjective views. While some of these diverse views continue to circulate in some public discussion forums, I would like to reiterate that I stand by the independent, professional conclusion.

But France’s Luis Vassy said the work of the inspectors was impartial, professional and rigorous, with Paris providing €1 million (£854,000) to the investigations. Annabel Goldie, the UK’s Minister of State for Defence, said London is confident that the OPCW experts will “continue to work professionally thoroughly and impartially”.

“Alex” was presented in October by the Courage Foundation, an outlet for WikiLeaks and its founder Julian Assange. He said his drafting of the original interim report into Douma was suppressed, with the OPCW’s leadership insisting on alterations to point to chlorine use.

A panel of activists and journalists gathered for the occasion issued a statement backing “Alex” and calling for an inquiry into the OPCW’s work. Jose Bustani, a former OPCW Director General, also signed the statements.

Alex refused to provide any copies of documents to verify his account, but with the OPCW’s member states gathering this week, WikiLeaks published one of his e-mails — dated June 28, just before the release of the FFM interim report — on Sunday. The e-mail was also given to Peter Hitchens, a writer for the UK’s Mail on Sunday and long-time OPCW critic and denier of the regime’s chemical attacks.

Alex was a member of the FFM’s Douma team, collecting samples for testing. He was convinced that the level of “chlorinated organic compounds” in the building were not as high as that claimed by the attack’s investigators, according to sources familiar with the process.

Analysts overruled Alex’s objections as the ihterim report was completed, leading to his claim of political pressure altering the findings.

He was not involved with the investigations after July 2018 or with the drafting of the final report. However, the report did reflect the debate over the source of the chlorine, saying it was “possible” — compared with “likely” in an earlier version — that the chemicals came from the cylinder found in the building. The chemical analysis also deals with Alex’s objections over the chlorinated organic compounds.

In autumn 2013 the Assad regime, under pressure after its August 21 sarin attacks near Damascus that killed at least 1,400 people, said it would hand over chemical stocks and destroy all facilities. The OPCW, created in 1997, was authorized to monitor the process.

But while giving up almost all of its stocks, Assad forces continued to use chlorine and even sarin in the Russian-regime effort to reclaim opposition territory. The UN has found the regime responsibility for 33 assaults since 2014, with the Islamic State blamed for six attacks with mustard agent.

In April 2017, a sarin attack on the town of Khan Sheikhoun, in Idlib Province in northwest Syria, killed about 90 people and wounding hundreds. The OPCW-UN Joint Investigative Mechanism, with the authority to assign responsibility, concluded in October that an Assad regime’s warplane dropped a cylinder with the nerve agent.

Russia immediately acted to prevent any further attribution. Using its veto in the UN Security Council, it vetoed any extension of the JIM’s mandate.

Moscow and the Assad regime, which took control of Douma the day after the suspected dropping of a chlorine cylinder by a regime helicopter, tried to limit the incident. OPCW inspectors were prevented for two weeks from reaching the site, with the regime claiming security concerns and Russian forces surrounding the site.

But the inspectors were finally able to gather enough evidence for an interim report, and the killings — as well as other suspected uses of chlorine and sarin in northwest Syria — led the OPCW’s members to sanction the establishment of the Investigations and Identification Team.

“Alex” and the Propaganda Campaign

Trying to prevent the work of the IIT, Russia immediately challenged the OPCW after the final report into Douma was published on March 1. Moscow published memoranda of complaints to the OPCW, asserting that the inspectors were wrong and the organization had been politicized.

Some of Russia’s statements appear to have been drawn from a memorandum by another dissenting OPCW staff member, leaked in May to a “Working Group” of UK academics denying the Douma attack and insisting that there was a “staged massacre”.

Ian Henderson, the OPCW liaison in Damascus, said the tests of an “engineering sub-team” had established that the chlorine cylinder could not have been dropped from the air. He wrote, without further evidence, that the cylinder might have been placed in a bedroom — thus implying a “staged” incident.

Henderson’s assertions over engineering, metallurgy and ballistics were at odds with the analysis of three experts involved in the Fact Finding Mission’s final report. The OPCW also noted that the memorandum — giving its investigation of responsibility — was outside the mandate of the FFM. They have referred it to the Investigations and Identification Team as it considers attribution.

But Moscow and its allies have continued to press the line of a politicized OPCW. Hoping to revoke the IIT’s authority or to pre-empt its findings, they are presenting Henderson and Alex as “whistleblowers” exposing the organization’s lack of legitimacy.

This morning the Russian Defense Ministry tries to divert attention, with yet another declaration that anti-Assad fighters and White Helmets rescuers are “plan to carry out provocations involving staged air raids and use of chemical weapons”.

Moscow’s Defense and Foreign Ministries have regularly proclaimed such incidents. There has never been evidence, let alone confirmation, of a “false flag” or “staged” operation by rebels or the White Helmets civil defense.