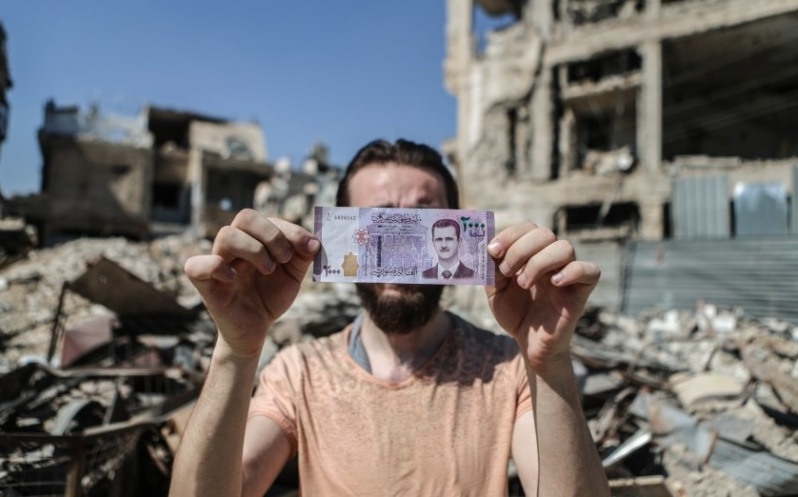 A resident holds up a 2,000 Syrian Pound banknote, in front of damaged buildings in opposition-held Douma, Syria, 2017 (Mohammed Badra/EPA)

Syria’s economy, with a 75% contraction because of the 104-month conflict, has been further rocked by a cut-off of funds from neighboring Lebanon.

EA sources in Damascus began reporting a drop in the money from Lebanon earlier this month, a story reinforced by summaries on Syria Report, a leading site on the country’s economy.

Multiple outlets are now writing about the effect of tight controls imposed on Lebanon’s banks amid a crisis in governance and mass protests. Reuters cites “three businessmen and five bankers in Damascus and abroad”, with “a senior Lebanese banker” commenting: “These deposits are now trapped. You can imagine the aftershocks from this which is beginning to surface in the Syrian economy.”

Some analysts estimate the Syrian holdings in Lebanese banks at $30 billion, almost a fifth of all deposits in the country. Many wealthy Syrians use the financial services to avoid US and European Union sanctions on the Assad regime. Jizad Yazigi, the editor of Syria Report, explains:

The Assad regime has been propped up by billions of dollars in Iranian support, notably in lines of credit for oil and other supplies. But Tehran, facing its own economic crisis and protests, cut off the credit line earlier this year.

Last month the Assad regime asked wealthy businessmen to deposit funds with the central bank and tightened regulations on withdrawals, with a limit at 5 million Syrian pounds per day.

But Damascus-based businessmen and bankers said the measures have had little impact, with the withdrawal cap raised to 10 million pounds after objections.

Yazigi said the Central Bank no longer as foreign currency for interventions, with reserves only $200 million. Meanwhile, the trade deficit is $3.8 billion according to the Observatory of Economic Complexity.

The situation is so serious that there are cracks in the regime’s parliament and press. According to the daily al-Watan, Alan Bakr said in a legislative session on Monday, “Is it reasonable for Syrians to go to fortune tellers so they know where the exchange rate is heading?” He chided the regime for “no initiatives and no vision”.

Another MP, Bassim al-Naameh, has said the Central Bank governor’s response is “inconsistent with reality”.

In an attempt to check discontent, the regime announced the largest salary rise in its history — 20,000 Syrian pounds (about $27) per month — for public sector workers. But it is unclear how the initiative will be financed.

A leading businessman in Damascus told Reuters, “We fear that this time the fall [in the currency] is irreversible.”