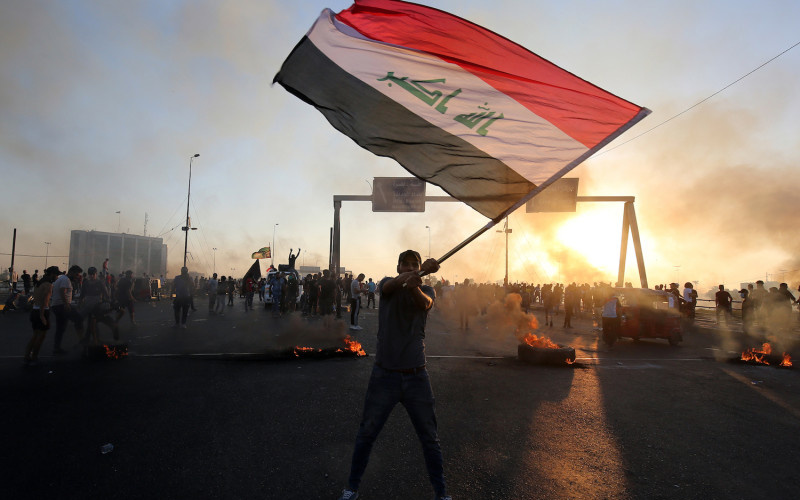 Originally published in The Conversation:

When Muhanad Habib, a 22-year-old Iraqi from the Sadr City district of Baghdad, posted on Facebook in late September, he probably didn’t imagine that his demands for a better life and basic rights would be met with bullets.

It will be a huge and angry public revolution in Baghdad….We will take to the streets protesting….Enough silence about what’s going on in Iraq. We cannot just watch Iraq being destroyed when we have armies of jobless and poor.

This was how it all started. Angry youth from Baghdad took to the streets. Unaffiliated with any political party or with well-known activists, the protesters – the majority of whom were born in the late 1990s or early 2000s – despaired about any prospect for change in Iraq.

The crackdown by security forces that followed left more than 100 people dead and thousands more injured. Iraqi president Barham Salih condemned the crackdown in a televised speech on October 7, claiming that orders to shoot at the protesters weren’t made by the state or its apparatus. The interior ministry ordered an investigation into the deaths.

Yet Salih’s statement raised questions about who is actually running the Iraqi state. And despite his and international condemnation, the crackdown continues on the ground.

Calls for a Homeland

Endemic corruption, unemployment, flawed institutions and poor public services linger in Iraq and have prompted protests since 2011, notably in Basra in 2018.

The recapture of Iraqi lands from the grip of Islamic State gave many Iraqis hope that lessons would be learnt about the repeated failures which gave rise to IS, and that those in power would take sincere steps to reform. But that hope has been diminishing every day.

The most recent protests came in the wake of multiple smaller demonstrations by different groups, including PhD graduates, doctors, and engineers in September.

They followed government actions that caused widespread anger. Impoverished people were outraged at a recent state campaign to destroy unlicensed properties and market stalls across Iraq, leaving many homeless and jobless.

It also followed the removal of a key general, Abdul Wahab Al Saadi, from his position as commander of the Counter-Terrorism Service, followed by his demotion to a lower post at the Ministry of Defence. The marginalization of a figure admired for his role in the military campaign against IS enraged many Iraqis.

The new generation chanted during the protests, “We want a respected homeland,” and “I am taking to the streets to get my rights.” One protester shouted, “The issue is not about water or electricity, but about a homeland.”

The immediate crackdown on the protests has surprised, shocked, and shaken Iraqis. The suppression turned a demonstration about corruption and unemployment into an uprising against the status quo and what participants see as rel=”noopener” target=”_blank”foreign interference, particularly from Iran.

Tear gas, live ammunition, and snipers were used to quell the protesters. As one protester put it: “They did things to us they never did to IS. They beat and insulted us. They used live fire and grenades. What have we done? All what we are asking for are our rights and all people’s rights.”

His words were used as the opening of a rap song titled “Iran’s Tails” released by an Iraqi expatriate in solidarity with the demonstrators.

The oppression and the state’s authoritarian measures to cover up the carnage are reminiscent of the days of Baathist rule and of former President Saddam Hussein’s defeat of a 1991 uprising. In 2019, the measures include an Internet blackout across Iraq except in the Kurdistan region, curfews in Baghdad and other provinces in the south, and blocked roads leading to Tahrir Square in Baghdad. Comparisons were also made with the Islamic State, who cut off the Internet in Mosul when Iraqi troops were advancing to retake the city in 2016.

Internet providers stopped the service in #Mosul. We are using the cell phone data right now. The service is so slow & scanty. They remind me of my days under #ISIS when the caliph cut it off in July 2016. It seems we have another caliph in suit & tie. #Save_the_Iraqi_People https://t.co/7MdE4R9l2v

The offices of media agencies covering the protests were attacked, with reports of protesters, activists and journalists being threatened and arrested.

Disconnecting Iraqis from the outside world, the authorities in Iraq tried to control the circulation of videos that showed civilians killed in broad daylight. But they also pushed the narrative of Iran-backed political parties and officials: that “intruders” – an implicit reference to Baathists or actors backed by an external agenda – were responsible for riots. A similar narrative was echoed by Iranian media outlets to undermine the legitimacy of the protests, accusing foreign powers of being behind them, an indirect reference to the US, Israel and Saudi Arabia.

Despite the Internet blackout, which remains partially in place, footage of the live shooting at the protestors and ambulances carrying the wounded were shared on social media as some Iraqi protesters resorted to innovative methods with the help of expatriates to reveal the scale of the violence.

100+ people have been killed and thousands injured over a week of protests in cities across Iraq. The protesters are demanding more jobs and less corruption. pic.twitter.com/AO5x054LSh

The heartbreaking scenes caused uproar among the Iraqi diaspora who protested in several countries around the world in solidarity. But for people inside Iraq, many still don’t know the scale of the atrocities, as they haven’t been able to access social media sites.

The Fallacy of Democracy

Since the fall of Saddam Hussein’s regime in 2003, successive governments have failed to put an end to Iraqis’ grievances. Time and again, only empty promises were made, and superficial measures taken. The electoral system has helped to produce and perpetuate a hybrid form of kleptocracy, authoritarianism, and kakistocracy – a government run by the worst, or most unscrupulous people. Armed groups, tribes, foreign powers, and religious clergy have all maintained this system.

The latest protests may have been suppressed but they revealed that democracy in Iraq is nothing but a facade. What sort of democratic government kills its own people, taking away their hopes and dreams? And can it still be called legitimate? Reacting indifferently to the deadly crackdown of innocent people in Iraq, the world needs to at least recognize that the root causes of Iraq’s ills are in the post-2003 system itself.