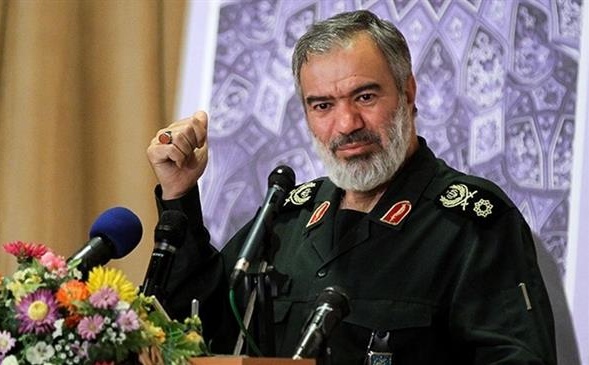 Hoping that mass protests over rising petrol prices have been suppressed, Iran’s regime maintains its threats with claims of foreign instigation and terrorism in the demonstrations.

The deputy commander-in-chief of the Revolutionary Guards, Brig. Gen. Ali Fadavi (pictured), told female members of the Basij paramilitary force on Sunday, “During recent riots, some of our neighbors acted against neighborly relations and the stipulations of Islam and committed acts of mischief. We advise neighbors to repent.”

Fadavi did not name the “neighbors”, but the Supreme Leader and other officials have pinned the blame for the demonstrations on the US, Israel, and Saudi Arabia. They have also accused the relatives of the late Shah and the Mujahedin-e Khalq Organization, dedicated to the overthrow of the regime since 1979, of involvement.

The commander said US, UK, and French authorities will never change their behavior vis-à-vis Iran and will continue acts of mischief: “However, we will defeat them as usual.”

He added, “If we wanted to make use of various capabilities of the Islamic Revolution, we were able to meddle with the most trivial issues of any country, but we will not do so because Islam does not allow that.”

The protests were sparked 10 days ago by a sudden 50% rise in the price of subsidized petrol. The measure, implemented at midnight on Friday, is seeking to cut consumption and Government expenditure amid long-term economic problems and comprehensive US sanctions.

Amnesty International said on Tuesday that at least 106 people, most of them protesters, had been killed. Iranian authorities said more than 1,000 people were arrested — including 100 “ringleaders”. Scores of banks, targeted amid public anger over corruption, and Government buildings were burnt.

Since last Wednesday, President Hassan Rouhani, his Ministers, and military commanders have been declared victory in dispersing the protests, defeating “armed anarchists”. But betraying ongoing concern, Friday Prayer leaders have called for the continued cut-off of the Internet; a Guards commander has cited a “miracle” in vanquishing the demonstrations, and 1st Vice President Esh’aq Jahangiri has warned of a “crushing response” to other countries.

“We Have Caught All The Mercenaries”

Iranian officials are adding a series of dramatic allegations to warn that they must be supported.

The Secretary of the Supreme National Security Council, Adm. Ali Shamkhani, said Monday that a planned attack on the country’s oil installations in Asaluyeh on the Persian Gulf was thwarted.

Shamkhani did not mention when the attack was supposed to take place or who was behind it.

The governor of Kermanshah Province in western Iran proclaimed that protesters were affiliated not only to the Mojahedin-e Khalq Organization but also to the Iranian Kurdish insurgency PJAK and the Islamic State.

“Saboteurs and rioters torched many businesses in Kermanshah,” Houshang Bazvand said. “They were linked to PJAK, Daesh, MKO and anti-establishment groups, but they have all been identified by the police and security forces and will be dealt with legally.”

Revolutionary Guards spokesman Brig. Gen. Ramezan Sharif insisted the protests were initiated by the MKO and by royalists seeking the return of the Pahlavi dynasty.

Brig. Gen. Fadavi told reporters, “We have caught all the mercenaries who explicitly confessed that they are mercenaries of the US and the MKO. The judicial system will give them the maximum punishment.”