TrumpWatch, Day 985: Trump’s War on Immigrants —“Shoot Them In the Legs, Put Alligators in Trenches” 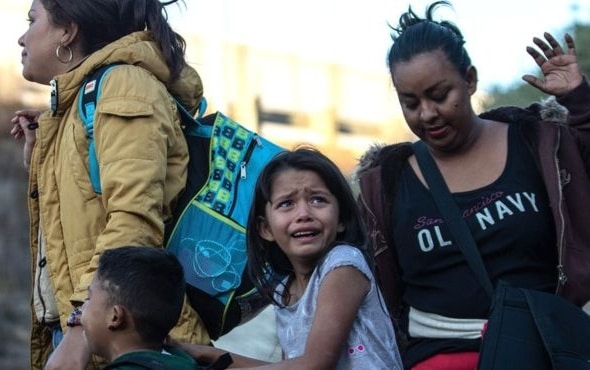 In his campaign against undocumented immigrants, Donald Trump has proposed shooting them in the legs and closing the entire 2,000-mile US-Mexico border.

The Trump Administration’s “zero tolerance” policy has included unprecedented measures such as separation of children from immigrant parents. Tens of thousands of migrants are being held — some indefinitely — with inhumane conditions and lack of adequate food and water in some facilities. The right to asylum has been sharply restricted.

Drawing on interviews with “more than a dozen White House and administration officials directly involved in the events”, The New York Times details how Trump wanted to go even farther but was checked by officials.

The account centers on meetings in March, after Trump’s record-setting 35-day shutdown of the Federal Government and his declaration of a “national emergency” had still not brought any funding for his Wall with Mexico.

Privately Trump often about an electrified border wall with a moat, filled with snakes or alligators, to the point of getting an estimated cost. He demanded spikes on top that could pierce human flesh.

Trump publicly suggested that soldiers could shoot migrants if they threw rocks. Staff told him this was illegal, so he proposed that they shoot migrants in the legs to slow them down. He was told that this was also not allowed.

So Trump issued an order to close the entire US-Mexico border, setting off staff panic and a week of Trumpian rages. In an Oval Office meeting of more than two hours, Trump shouted, “You are making me look like an idiot! I ran on this. It’s my issue.”

Trump, who had long berated Homeland Security Kirstjen Nielsen as “weak”, stepped up the attacks, citing hard-right commentators: “Lou Dobbs hates you, Ann Coulter hates you, you’re making me look bad.” Secretary of State Mike Pompeo was assailed for an agreement with Mexico which did not far enough in the blocking of asylum seekers.

In the Oval Office meeting, Trump snapped at the participants, including Nielsen, Pompeo, and his son-in-law Jared Kushner: “All you care about is your friends in Mexico. I’ve had it. I want it [the border closure] done at noon tomorrow.”

White House advisors pleaded for time, and finally were granted a week by Trump. They pushed Mexican authorities to immediately escalate apprehensions of migrants, showering Trump with e-mails that they had succeed. Corporate executives, Republican lawmakers, and Chamber of Commerce officials were gathered to tell Trump about the damage of the border closure.

The advisors thought they had checked the plan, but on a trip to California, Trump ordered Customs and Border Protection head Kevin McAleenan to stop all migrants from crosskng the border. Trump told the official that if the courts intervened, he would pardon McAleenan.

Trump told Border Patrol agents to keep all migrants out of the US. But when he left the room, McAleenan told the officer to ignore Trump and to adhere to the law as they did their jobs.

Trump finally stepped back from the border closure, but fired staff who had not bowed to his demands. Among them was Nielsen.

Trump immediately pushed it aside and said he wanted a concrete wall.

Nielsen explained that this would not work and contracts for a steel barrier had already been signed.

Trump dismissed her and, breaking an agreement to wait a week to make the announcement, tweeted, “Secretary of Homeland Security Kirstjen Nielsen will be leaving her position, and I would like to thank her for her service.”

The hardline anti-immigrant White House advisor Stephen Miller, who prodded Trump into his most aggressive positions, had a blacklist of other officials. Francis Cissna, the head of the US Citizenship and Immigration Services; John Mitnick, the Homeland Security general counsel; and Ron Vitiello, a top official at Customs and Border Protection, would all be evicted.

By August, Trump had restrictions on asylum seekers. McAleenan announced that immigrant families will be detained indefinitely. And legal immigrants are being targeted, threatened with deportation if they are deemed to be “public charges” through their use of services such as Medicaid and food stamps.

And he told The New York Times this summer, “I have absolute power to shut down the border.”