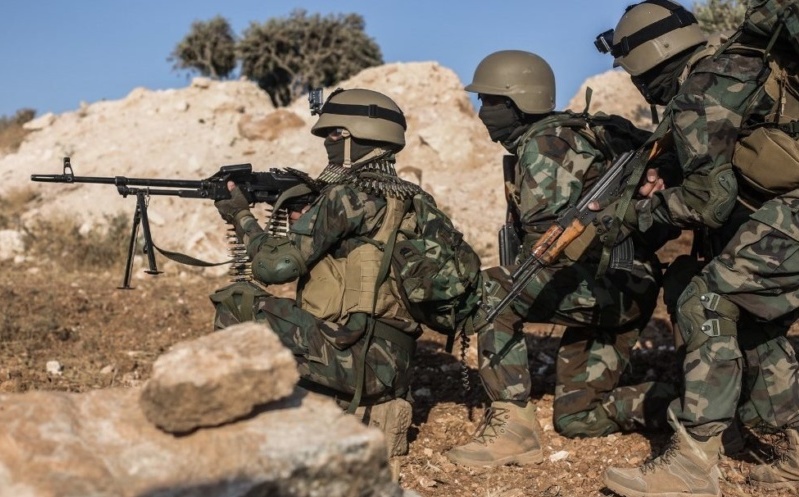 Turkish-backed rebel factions have announced a plan to unite in northern Syria, but questions remain about whether the latest declaration will be implemented.

The President of the opposition Syrian Interim Government, Abdurrahham Mustafa, announced the consolidation in a press conference in the Turkish border city of Sanliurfa. The National Liberation Front, based in Idlib Province, will be brought into the Syrian National Army based in northern Aleppo Province.

The force, said to have at least 35,000 full-time fighters, will be overseen by the Turkish Defense Ministry and intelligence services.

However, local sources expressed caution in comments to EA. Some assessed that the announcement is more about Turkish projection of influence rather than the plans and aspirations of the rebel factions. They said there had been almost no consultation with the National Liberation Front, which is facing not only the Russian- and Iranian-backed Assad regime but also the Islamist bloc Hay’at Tahrir al-Sham, which controls much of Idlib.

A local analyst told EA on Friday that, despite a Russia-regime offensive since late April trying to overrun Idlib, HTS has been bolstering berms and barricades at frontlines with the National Syrian Army in western Aleppo Province. He also noted that some rebel groups, such as the Jaish al-Izza faction, remain outside the NLF and thus outside any consolidation.

The analyst assessed, “The NLF factions got a lot of supplies from Turkey, but they’re still led by people who on other occasions haven’t stood up against HTS. That has enabled HTS to “put out fires” by picking off one moderate group after another.”

The Challenge of HTS

Charles Lister, a specialist on the groups in northern Syria, sees the proposed consolidation as a Turkish step both to gesture towards Russia, which has demanded progress on removing “terrorists” from Idlib. With HTS resisting a Turkish demands to merge into the NLF, Ankara is now hoping to turn HTS against factions loyal to Al Qa’eda such as Huras al-Din: “That would go some way to assuage Russian concerns, while also playing to newfound American worries” about Huras al-Din.

The local analyst who spoke to EA concurs, but notes the challenge:

The merger is a political announcement, a good step, but it stands and falls with the will and ability of Idlib’s rebels to confront HTS. Just because the NLF factions merged with the [Turkish-backed] National Army on paper, that doesn’t mean that their behavior will change, despite massive Turkish pressure.

That’s all up to local commanders, as before.

It is not all about military might. In the past HTS has given in when the pressure from civilians becomes too great. The barrier of fears has fallen in some places in Idlib, with people are openly opposing the HTS regime. If that increases — massively increases — HTS’s [Syrian] Salvation Government is toast, and the HTS military will be in serious trouble.

He adds that some HTS fighters, who joined the faction as the force most capable of resisting the Russian-regime offensive, are reconsidering: “Recent military setbacks, as well as HTS hoarding of material, made many of them think twice.”

But the analyst cautions that HTS could rally support if the Turkish plan for the NLF-NSA consolidation stalls, or if the US — which carried out two deadly bombings of HTS and Huras al-Din this summer — strikes again.

Let’s hope the Turks actually know what they do, and that the US will refrain from launching attacks on extremists because that would turn a lot of solidarity and sympathy towards HTS again.

The Russian-regime offensive has seized part of the northwest, the last major opposition area in Syria, with the recapture of almost all of northern Hama and part of southern Idlib Provinces.

At the start of September, Russian President Vladimir Putin announced a pause in operations, with Moscow concentrating on political maneuvers with Turkey about the future of Idlib.

Because of the links between HTS and the Salvation Government, many countries are moving away from supporting civilians in the group-held areas….What happened today is a major achievement that will make it easier for the international community to deal with humanitarian situations in the Idlib region, after Russia tried to market that there are no moderate factions there.