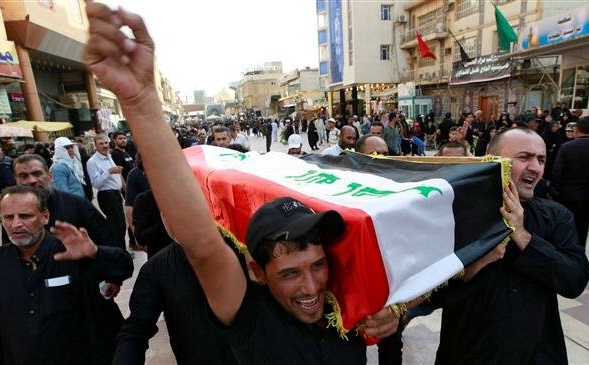 Men carry the coffin of a demonstrator at a funeral in Najaf, Iraq, October 7, 2019 (Reuters)

Iran has turned Iraq’s growing protests into a power play against the US and other rivals, accusing the “enemies” of fomenting unrest.

More than 100 people have been killed in the renewed demonstrations in Baghdad and in southern Iraq. The gatherings were spurred initially by rising unemployment, but have expanded into challenges to the Government over corruption and its legitimacy to rule.

Many of the protesters have also condemned Iran as the power behind the administration of Prime Minister Adil Abdul-Mahdi.

The Supreme Leader’s office set out the Iranian line in a tweet on Sunday night, in Arabic and then in English:

#Iran and #Iraq are two nations whose hearts & souls are tied together through faith in God & love for #ImamHussain & the progeny of the Prophet (pbut). This bond will grow stronger day by day.

Iranian officials and State outlets spread the message on Monday. Government spokesman Ali Rabiei told reporters in Tehran, invoking Iraq’s hosting of millions of Muslims for Arba’een religious processions: “The Iraqi people should pursue their demands but at the same time keep an eye out for malevolent forces that look to exploit the protests and not let them [succeed].”

He said “enemies” would never disrupt Iran’s strong bonds with Iraq: “No ill-intended, fake propaganda can break the Iraqi and Iranian nations apart.”

But Rabaei was careful not to comment on internal issues, including those behind the demonstrations. Instead, he called for a refusal of violence and for a “democratic” solution by all parties.

And later in the day, Iranian State outlets stepped back from the confrontational tone, instead emphasizing the line that protesters would not affect the cermonies for Arba’een, the 40th day after the anniversary of the death of Hussein, Shia Islam’s third Imam.

Iranian press proclaimed that the Iraqi government and people, including “influential figures”, will “certainly settle the internal issue”.

During the occupation of the country by the American forces and after that, many events took place in Iraq, but the Iraqi government and nation have managed to overcome all these issues through prudence and wisdom as a result of consensus among all Iraqi parties and groups as well as political and religious figures.

There was a general message to other countries, who might have “a covetous eye” on events to advance their interests, “not to bother themselves and know that these are internal affairs of Iraq”.