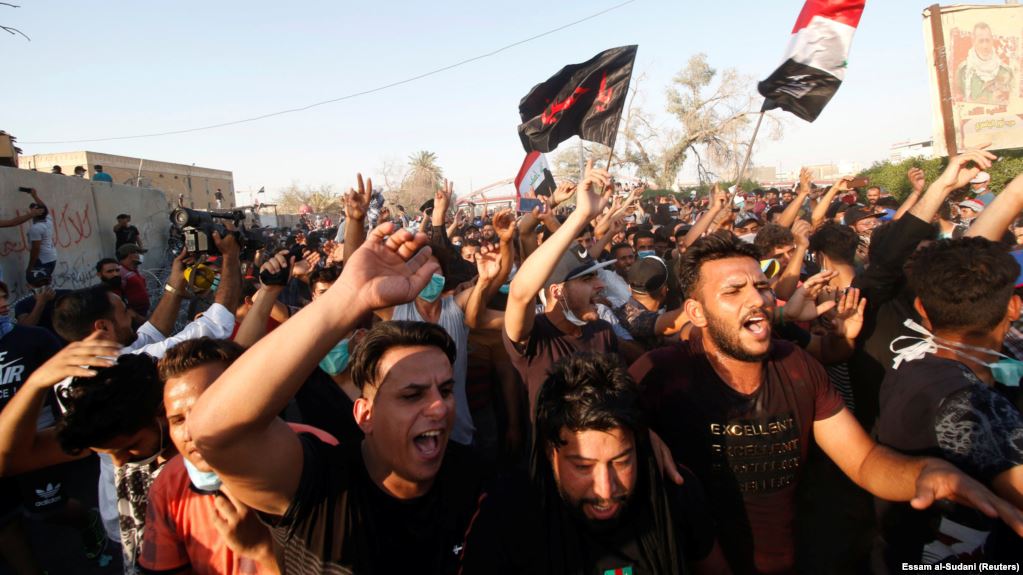 “These protests, led by Basra’s young people, demonstrate that they can no longer be fooled. These youth do not care about Iraq’s sectarian conflicts.”

EDITOR’S NOTE: Weeks of protests in southern Iraq over lack of services and jobs, corruption, and Government disfunction have escalated into unrest in Basra, the country’s second city. Government buildings have been burnt, and on Friday the Iranian Consulate was torched.

Balsam Mustafa explains the causes and significance of the demonstrations:

It is perhaps unprecedented that in the 21st century, clean drinking water is lacking in what should be a prosperous city in Iraq. Yet residents of Basra province, where two great rivers come together, are on the street demanding one of the basic human rights — only to receive bullets instead.

July’s protests in southern Iraq dwindled due to Government suppression but resurged in Basra when poisoning cases, caused by polluted water, sharply increased. Since mid-August, the admission of thousands to hospitals has only highlight the miserable reality of the crippled health sector. That reality was defied by Adila Hamoud, the Iraqi Health Minister, who insisted in a press conference that only 1,500 people — with “minor” cases of diarrhea — were treated and all received good treatment.

Water pollution in Basra is part of a larger crisis in all of Iraq, an accumulation of a 15-year-long failure, disfunction, and corruption. It has not recently been “discovered”, contrary to the assertion of the representative of Shia’s high religious authority in Najaf when he visited the province: “It was revealed to us the extent of the governmental negligence to handle this problem, which only needed some effort and money.”

The humanitarian disaster taking place was still insufficient to shake Iraq’s political elites this summer, as they jockeyed over being part of the largest bloc to form the new government. In contrast, Iraqis from across the country have donated bottled water to the people of Basra in an act of charitable solidarity.

From Water to Political Parties and Tehran

What started as a call for clean potable water quickly turned into a protest against political parties and the Iraqi system. Over the past week, the demonstrations have grown after the killing of wounding of protestors — some of whom were volunteers among the Shia armed groups that fought against the Islamic State in northern Iraq. For the first time, women are among the protesters.

Largely peaceful and disciplined daytime rallies turned into unrest during the night. On Wednesday, Basra’s main provincial building was set on fire. The entrance to Umm Qasr port was blocked, and the highway from Basra to Baghdad cut.

On Thursday night, protestors torched the majority of Shia party headquarters, echoing the early disturbance of July’s protests in the south. They did not attack the Peace Brigade militia of Muqtada al Sadr, claiming that it was surrounded by a human shield of the Sadrists.

But the demonstrators showed their angry with the Shia cleric Sadr, chanting “Don’t Ride the Wave” over his speech earlier in the day. In that address, Sadr taunted the politicians’ priority with forming the “biggest bloc” in Baghdad, even though he was a central figure in the process. He criticized successive governments since 2003 for ignoring Basra Province but overlooked that many ministers, including those for water resources, were Sadrists.

On Friday night, angry protestors escalated clashes by setting the Iranian Consulate on fire, raising the Iraqi flag, and chanting, “Iran out, Iran out”. The rejection of Tehran’s role in Iraq is buttresed by its alleged complicity in water pollution, cutting the flow of more than 42 rivers to Iraq and by using the Shaat al-Arab waterway as a dumpster for its draining water.

A Debate Over Protest

The discrepancy between the day and night protests manifested itself in a debate on social media following the Iranian Consulate incident. Critical demonstrators said the setting of fires allows political parties and their militias to divert and hijack the protests to settle scores. Some posters suggested that the torchings were carried out by the parties to sabotage rallies and green-light a crackdown by militias. Speaking on condition of anonymity, one protestor told me:

people in Basra have every right to do anything. This is a natural reaction. They’re angry. However, torching is planned by parties. I’m personally against all burning acts.

On social media, leaders of Iranian-backed militias have started a campaign of tarnishing the protestors as “intruders”, “Ba’thists”, “Da’ishis” [ISIS sympathizers], or “thugs”.

Some people in Basra are calling on protestors to withdraw from the streets, and demonstrations have been suspended until further notice to avoid chaos and to distance the protests from the struggle of rival parties and their regional and international supporters, especially Iran and the US.

A Parliamentary session, called by Moqtada al-Sadr but convened in defiance of the Constitution, failed to address the water crisis. Instead, it became a theater in which barbs were exchanged between Prime Minister Haider al-Abadi and Basra’a governor, who was a candidate on Abadi’s list in May’s elections. Decisions were made on security matters rather than the water problem, and the session ended with a call by both Sadr and leaders of the Fath Party for Abadi to step down as an MP.

Using the statement of Najaf’s clerics that “the tested should not be re-tested”, Sadr introduced new conditions to choose three candidates for the Prime Minister’s position. His statement was soon praised in a tweet by the leader of the pro-Iran faction ‘Asaib ahl al Haq, hinting at an agreement to form a new government along the lines promoted by Najaf’s clerics, diminishing Abadi’s chances for another term.

The leaders of the “Conquest Alliance”, including the Fath Party, then tried to tried to turn anger against the US, accusing its Basra consulate of directing the protests.

The Quest for Responsibility and Rights

As with other waves of protests in Iraq, Basra’s marchers have not achieved their goals, but they have exposed how political elites have marginalized Iraqi people, irrespective of their sect and ethnicity. They have shown the deception practiced by politicians for more than a decade, making use of sectarian slogans and narratives and contributing to the loss of lives. And they have shown how when the interests of politicians meet, the exploiters can shamelessly coalesce in one camp, sitting next to yesterday’s foes.

These protests, led by young people, demonstrate that they can no longer be fooled. These youth do not care about sectarian conflicts. They are looking for their rights, which politicians have failed to grant over the past 15 years.

Following the low turnout in May’s national election and earlier protests in the south, Basra’s demonstrations are pointing to the deep gap between Iraqis and all political factions. It is a gap that can never be fulfilled unless the distorted political process, blessed and fortified by the foes of Iran and the US, is re-build from its core.