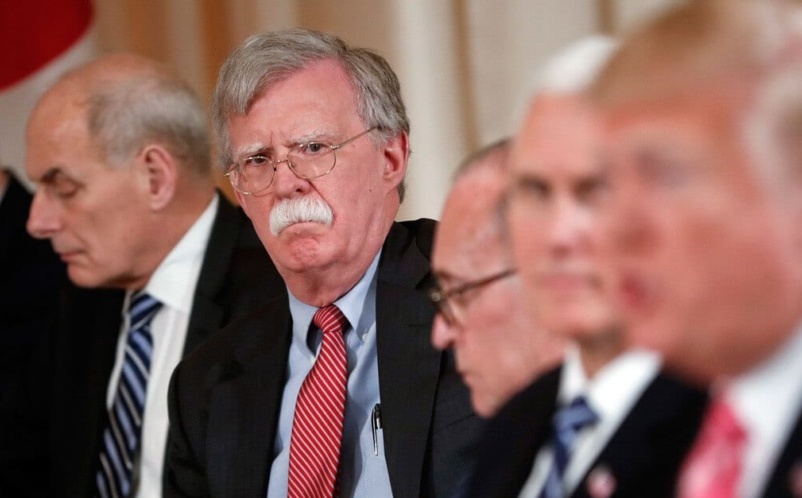 Once a devoted fan of Bolton’s hawkish declarations on Fox TV, Trump removed the advisor by tweet on Tuesday, almost 18 months after Bolton replaced the fired Gen. H.R. McMaster.

White House officials told the media that Bolton’s dismissal came after a Monday night argument with Trump over US policy toward Afghanistan, which collapsed in a Presidential tweet on Saturday.

Trump tweeted that he was cancelling a meeting with the Taliban at the Camp David retreat in Maryland. The sudden withdrawal threatened to curb, or even end, more than a year of talks between the US, Pakistan, and the Taliban.

On the surface, Trump’s cancellation — reinforced by his Monday statement that the negotiations are “dead” — was a victory for Bolton, who opposed the process 18 years after the 9-11 attacks and the US-backed removal of the Taliban from Kabul and other parts of Afghanistan.

But “White House staff” told the media yesterday that Bolton had embarrassed Trump by playing up the setback and apparent turmoil in US policy. While those staff were not named, Trump’s son-in-law Jared Kushner — who has tried to build up his own foreign policy empire — has been at odds with Bolton.

So have Secretary of State Mike Pompeo, who reportedly will not speak with the National Security Advisor outside meetings, Treasury Secretary Steven Mnuchin, and White House Chief of Staff Mick Mulvaney.

While it is unclear whom Trump met on Tuesday morning, he apparently was prompted to seize on Bolton’s offer on Monday night to resign. Trump posted the tweet less than an hour after the White House said Bolton would be joining Pompeo and Mnuchin at a 1:30 p.m. press conference.

The in-fighting among Trump’s inner circle escalated since the spring amid a series of foreign policy muddles and Trump’s ego-driven interventions.

Bolton pushed for a US-backed replacement of the Maduro Government in Venezuela, amid economic crises and protests both for and against the Chavista system. But the efforts of Juan Guaidó, the National Assembly leader who declared himself President, failed as the Venezuelan military continued to support Nicolás Maduro.

While Pompeo was alongside Bolton in the effort, the National Security Advisor was cast as the architect of the failed operation. Similarly, when Trump approved but quickly called back airstrikes inside Iran in late June, he and White House staff pointed at Bolton: “If it was up to John, we’d be in four wars now.”

Trump told NBC News in June, “John Bolton is absolutely a hawk. If it was up to him, he’d take on the whole world at one time, OK? But that doesn’t matter because I want both sides.”

Antagonism was also spurred by Trump’s embrace of photo-opportunity summits with North Korea’s Kim Jong-un. Bolton, who has advocated military action against Pyongyang, did not accompany the US delegation in late June, when Trump took 20 steps into North Korea for the cameras. Instead, the National Security Advisor was 1,200 miles away in Mongolia.

As North Korea continued to balk at “denuclearization”, including resumption of missiles, the failure only stoked White House resentment of Bolton, who had said there would be no advance. Some officials blamed the National Security Advisor for Kim Jong-un’s dramatic walkout of the February summit in Vietnam.

Trump said he will appoint a replacement next week. Deputy National Security Advisor Charles Kupperman, a hawk like Bolton, will serve as acting NSA until then.

Meanwhile, Pompeo and Mnuchin were all smiles as their news conference proceeded without Bolton. The Secretary of State twisted the knife into his former colleague:

[Trump] should have people that he trusts and values, and whose efforts and judgments benefit him in delivering American foreign policy….There were definitely places that Ambassador Bolton and I had different views about how we should proceed.