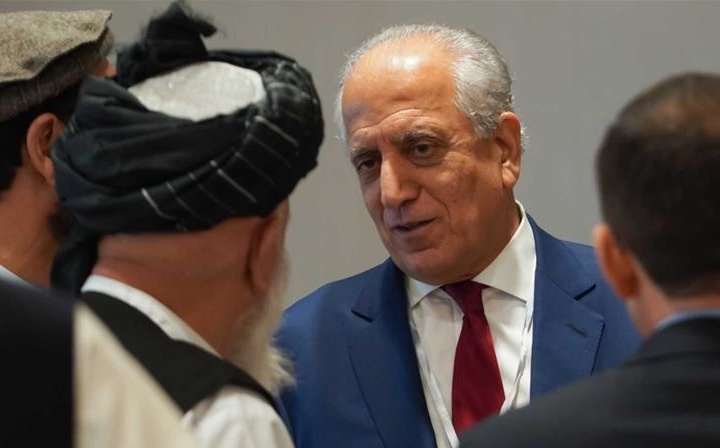 Following his Twitter cancellation of a Camp David meeting with the Taliban, Donald Trump said on Monday that negotiations are over:

I’m not looking to discuss it. I’m not discussing anything.

Secretary of State Mike Pompeo had said in Sunday interviews that negotiations were off “for the time being” but claimed that progress that had been made.

And as the US envoy to Afghanistan, Zalmay Khalilzad, returned to Washington on Monday for meetings, other officials pushed back on Trump’s “dead” declaration.

A second senior official assessed that negotiations was far from over, citing Trump’s precedents in threatening but then seeking talks with North Korea and with Iran.

ORIGINAL ENTRY: A tweet by Donald Trump has checked more than a year’s negotiations between Pakistan, the US, and the Afghan Taliban for a political resolution in Afghanistan after war and conflict since 2001.

Details have been published by The New York Times of Trump’s decision, following a White House meeting with top advisors on August 30, to declare a halt to the process — with the claim that he was on the verge of greeting Taliban representatives at the Presidential retreat, Camp David, in Maryland.

Unbeknownst to almost everyone, the major Taliban leaders and, separately, the President of Afghanistan, were going to secretly meet with me at Camp David on Sunday. They were coming to the United States tonight. Unfortunately, in order to build false leverage, they admitted to..

….only made it worse! If they cannot agree to a ceasefire during these very important peace talks, and would even kill 12 innocent people, then they probably don’t have the power to negotiate a meaningful agreement anyway. How many more decades are they willing to fight?

In the crucial August 30 meeting in the White House, Secretary of State Mike Pompeo and the US negotiator in the talks, Zalmay Khalilzad, said an agreement would permit withdrawal of US troops — a high-profile claim that Trump is hoping to push in his 2020 re-election campaign.

About 135,000 troops would depart in 4 1/2 months, and the rest would leave within 16 months. In return, the Taliban would commit itself not to shelter “terrorists”.

But National Security Advisor John Bolton, joining by video from Poland, argued that there could be some drawdown of forces without any arrangement with the Taliban.

The Taliban controlled the capital Kabul until November 2001, when they were expelled by a coalition of Afghan groups supported by the US after the 9-11 attacks. The group continued to pursue its fight against Afghan rivals, American forces, and an international coalition, and they hold about half of Afghanistan today.

At some point during the meeting, a participant proposed completion of negotiations in Washington, appealing to Trump’s ego and penchant for photo opportunity summits. The official suggested that Trump also invite Afghan President Ashraf Ghani, whose government has not been in the talks with the Taliban, to get his acceptance of the process.

Trump seized on the proposal to suggest that the Taliban come to Camp David, the mountain complex named after President Dwight Eisenhower’s grandson, on September 8.

But the Taliban, in discussions with US negotiator Khalilzad, said they would come to the US only after an agreement was announced. That caused a problem because Trump wanted to present himself as the “Art of the Deal” President who completed the accord, holding separate meetings with the Taliban and Afghan President Ghani before a dramatic announcement of success.

Ghani, with Presidential elections scheduled for September 28 but in jeopardy of not being held, accepted. However, Taliban leaders warned of a trick to bring them into direct negotiations with the “stooge Government” before an agreement was confirmed.

Then aides told Trump about a suicide car bomb attack that killed 12 people, including a US soldier. “Senior officials” said Trump and advisors concluded that the Taliban visit could not proceed. Mr. Trump and his team were unified. He could not host Taliban leaders at Camp David just days after an American was killed.

“This is off; we can’t do this,” Trump said, according to one official.

However, no announcement was made by the White House. It was only on Sunday that, surprising some of his staff, Trump confirmed the cancellation via Twitter.

US officials, trying to hold together the process, said the effort was not over and the deal was neither rejected nor accepted.