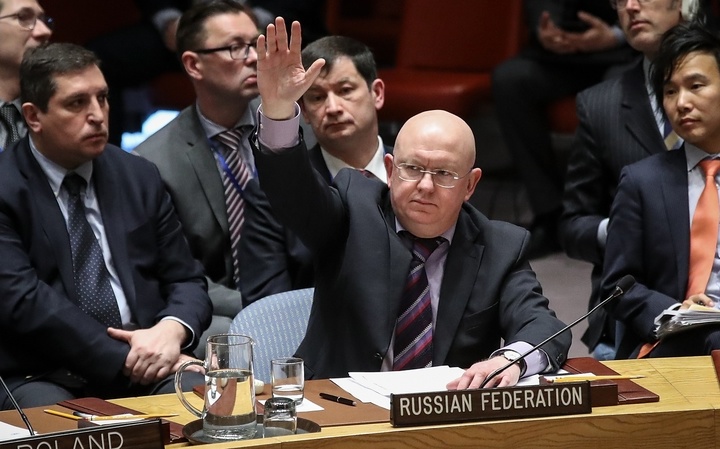 Russia has moved to block a UN Security Council resolution for a ceasefire in opposition-held Idlib Province in northwest Syria.

Kuwait, Germany, and Belgium drafted the call for a halt to attacks, including the Russia-Assad regime offensive that has seized almost of northern Hama Province and part of southern Idlib Province. It has also killed more than 1,000 civilians, wounded thousands, and displaced more than 400,000 since late April.

At the end of August, Russian President Vladimir Putin declared a pause in the assault, but the Kremlin has been careful to reserve the right to resume the offensive against “terrorists”.

Rather than rejecting the ceasefire resolution outright, Russia — joined by China — have tabled an alternative. Its text sanctions the Russian-regime offensive by saying any resolution “shall not apply to military operations against individuals, groups, undertakings and entities associated with terrorist groups, as designated by the Security Council”.

Since its military intervention in September 2015 to prop up the Assad regime, Moscow has used the pretext of attacks on “terrorists” and Islamic State to bombard opposition territory, impose sieges, and pursue offensives to regain the areas.

Diplomats said the US and other states will push back Moscow, standing on the Kuwaiti-German-Belgian draft that “member states ensure that all measures taken to counter terrorism, including in Idlib Governorate, comply with their obligations under international law”.

The Security Council will vote on both drafts on Thursday.

Russia is almost certain to veto the version calling for a ceasefire. During the 102-month Syrian conflict, Moscow has vetoed 12 resolutions criticizing the Assad regime and/or pursuing a halt to regime attacks on civilians and opposition groups.

In early August, Panos Moumtzis, the UN’s humanitarian chief for Syria, said, “We have so far 39 health facilities, 50 schools, water points, markets, bakeries, and multiple civilian neighborhoods who have received a direct hit.”

Last week the 18th report by the UN Commission of Inquiry said Russia and the Assad regime may have committed war crimes with their attacks on civilian area, infrastructure, and crops, as well as stating, “In government-controlled areas, civilians, including recent returnees, have been arbitrarily arrested and detained, harassed, mistreated, and tortured.”

The UN estimates that about 3 million people — 20% of Syria’s remaining population — live in Idlib and northern Hama. About half of them had already been displaced from other areas of the country.