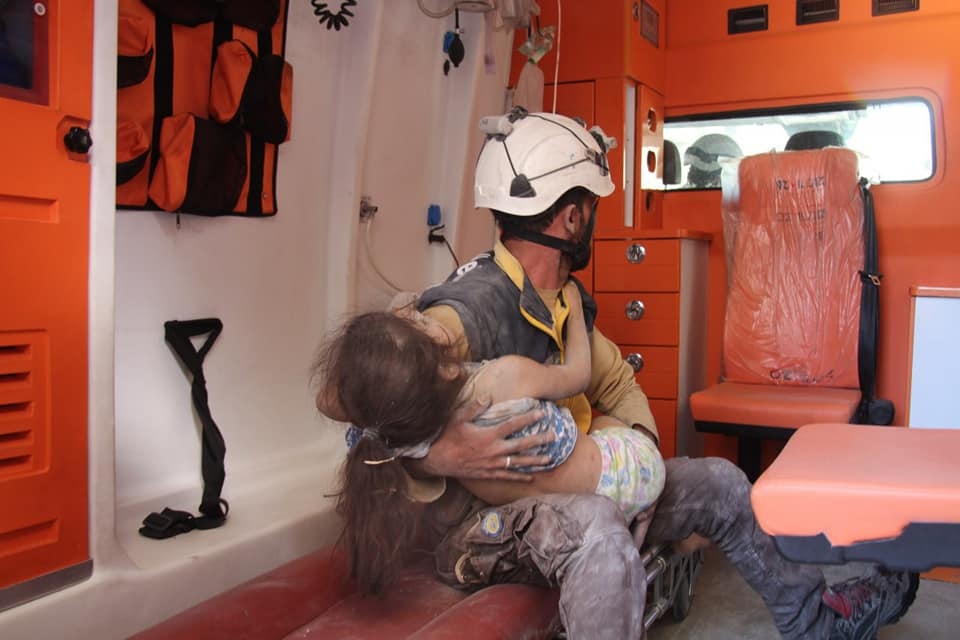 A White Helmets rescuer holds a child wounded by pro-Assad attacks on Idlib Province, Syria, May 27, 2019

Russia has blocked a UN Security Council resolution for a ceasefire and end to killing of civilians in northwest Syria, its 13th veto during the 102-month conflict.

Drafted by Kuwait, Germany, and Belgium, the resolution mandated that “member states ensure that all measures taken to counter terrorism, including in Idlib Governorate, comply with their obligations under international law”.

Since late April, a Russia-Assad regime offensive has killed more than 1,000 civilians, wounded thousands, and displaced more than 400,000. The assault has seized almost all of northern Hama Province and part of southern Idlib.

Russia vetoed the resolution because it did not include an exemption for an offensive against “terrorists” on a UN blacklist, a pretext used to attack all anti-Assad groups and reoccupy much of the opposition territory across Syria since Moscow’s military intervention in late September 2015.

At the end of August, Russian President Vladimir Putin declared a pause in the offensive, but the Kremlin has been careful to reserve the right to resume the offensive against “terrorists”.

Of the Security Council’s 15 members, 12 supported the resolution. But China also cast a veto, while Equatorial Guinea abstained.

Before the vote, Russia’s UN Ambassador Vassily Nebenzia signaled the veto by asserting the resolution was “to save the international terrorists who are entrenched in Idlib from their final defeat, and to paint Russia and Syria as the parties responsible for what is happening in Idlib”.

Nebenzia gave no evidence for the claim, but the Assad regime’s ambassador Bashar al-Ja’afari pursued the denigration of Security Council members: “Syria wonders about the silence of those countries when it comes to the illegitimate presence of the foreign troops on its territories and Israel’s repeated aggression on the country.”

US Ambassador Kelly Craft summarized, ““What we are witnessing is not counter-terrorism, but an excuse to continue a violent military campaign against those who refuse to accept the Assad regime’s authority.”

Nebenzia denied any killing of civilians by the Russia-regime offensive: “There have been no large-scale operations in Idlib. The province adheres to the ceasefire regime, periodically violated solely by terrorists.”

France’s Nicolas de Rivière indicated to reporters that Russia would have to deal with the cost for the Assad regime of reconstruction, after a conflict which has drained 75% of Syria’s GDP and caused hundreds of billions of dollars of damage:

Those…who object to humanitarian access to Syria, those who are currently carpet-bombing Idlib, will be held accountable. And those who are doing so will have to pay for the reconstruction. We act on the principle you broke it, you own it.

Russia and China subsequently tabled a resolution that any ceasefire “shall not apply to military operations against individuals, groups, undertakings and entities associated with terrorist groups, as designated by the Security Council”.

The text failed to gain the nine votes necessary for passage. Only Russia and China voted for their draft, while nine countries objected and four abstained.

The UN estimates that about 3 million people — 20% of Syria’s remaining population — live in Idlib and northern Hama. About half of them had already been displaced from other areas of the country.