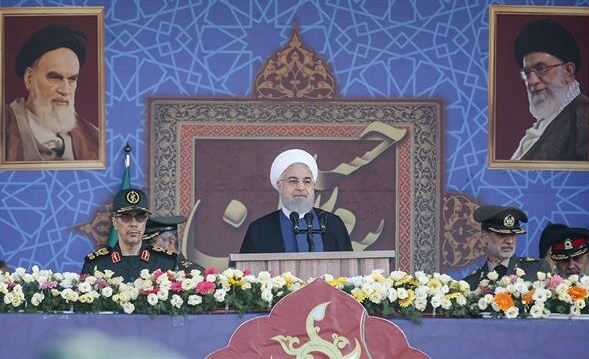 Iran’s President Hassan Rouhani has invoked Sacred Defense Week, marking the 1980-1988 war with Iraq, to declare “victory” over the US, Israel, and regional rivals such as Saudi Arabia in 2019.

Rouhani used a ceremony on Sunday to link the 1980s conflict, in which hundreds of thousands of Iranians were killed, to today’s attacks in the region and US “maximum pressure”:

The [1979] Islamic Revolution could be beneficial for the entire region and the world, but its enemies stood against the will power of the Iranian nation and began their forlorn attempts.

The enemies of the Iranian revolution and people plotted to undermine our security and defense power….As the enemies’ main goal during the Sacred Defense was to destroy our revolution, today they are chasing the same goal with their psychological and economic war.

In 1988 Ayatollah Ruhollah Khomeini, the founder of the Islamic Republic, said he had to accept a ceasefire without achieving victory over Saddam Hussein’s Iraq: “Taking this decision was more deadly than taking poison.” But his successors have established Sacred Defense Week to proclaim Iran’s valor in facing and defeating enemies.

In his televised speech, Rouhani avoided any reference to last weekend’s drone and missile strikes on two Saudi oil facilities, which have further raised tensions and escalated US sanctions. And he largely stayed away from the rhetoric of confrontation — in which Revolutionary Guards commander Maj. Gen. Hossein Salami has vowed “the full destruction of any aggressor” and Foreign Minister Mohammad Javad Zarif has warned of “all-out war” if Iran is attacked.

Instead, as he goes to the UN General Assembly in New York this week, Rouhani portrayed Iran as a force for peace, while seeking Tehran’s control of the Persian Gulf.

This year, we are going to New York with the slogan of “Coalition of Hope” and “Hormuz Peace Initiative”….The Islamic Republic of Iran can ensure the security of the Persian Gulf and the Sea of Oman with the help of regional countries.

Iran has objected to a US military presence in the Gulf, including an American-led naval coalition to escort tankers after attacks on shipping and detention of vessels this spring and summer.

The President did close with a warning to Washington, “If they really want security in the region, they need to stay away from it. The enemies do not date to carry out acts of aggression against Islamic Iran because of the experience of the Sacred Defense.”