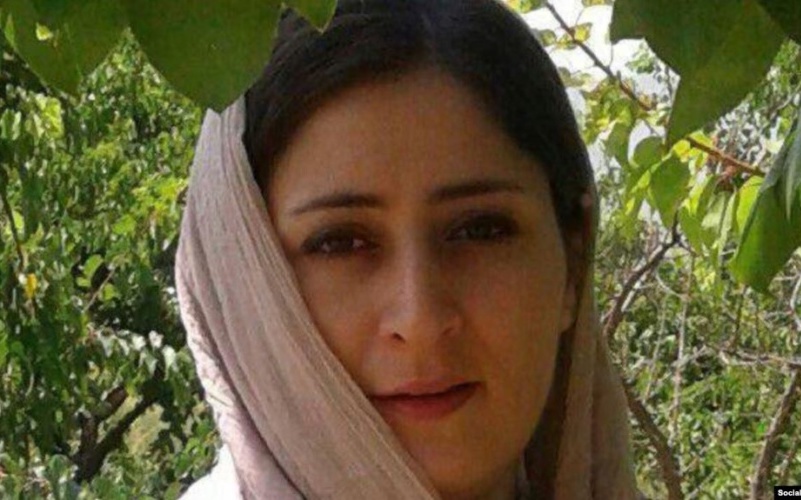 Researcher Atefeh Rangriz (pictured) has been given an 11-year prison sentence for participating in a May Day rally in Iran’s capital Tehran.

Rangriz was also given 74 lashes by the hardline Judge Mohammad Mogheiseh in a Revolutionary Court.

About 35 people were arrested in the May 1 demonstration in front of the Iranian Parliament.

The researcher’s sentence is the latest in a series of punishments for activism over women’s and labor rights.

On July 31, three women — civil rights activists Yasaman Aryani, Monireh Arabshahi, and Mojgan Keshavarz — were given prison sentences of at least 16 years for offenses such as not wearing hijab and handing out flowers on a Tehran subway train on International Women’s Day.

Just over a week ago, journalist Marzieh Amiri was handed a 10-year term and 148 lashes by the Revolutionary Court for reporting on International Workers’ Day rallies. Amiri, who works for the reformist newspaper Shargh, was was seized as she covered the May Day rally.

In a further sign of its unease over ongoing protests about rights, at least 13 of the signatories of opens letter to the Supreme Leader have been arrested.

The first letter on June 11, signed by 14 activists in Tehran and Iran’s second city Mashhad, called for constitutional changes and Ayatollah Khamenei’s resignation:

The time has come for the people, thinkers, and caring individuals to lead a national movement by setting aside conciliatory tendencies that have facilitated the destruction of our culture, civilization and national wealth and with all honesty step into the ring and demand fundamental changes to the Constitution and the resignation of the Leader who is unjustly extending his authority on a daily basis.

There is not only a lack of will to be accountable to the Iranian people, but actually an insistence by the ruling regime to remain irreformable and wrongful under a singular dictatorship.

On August 11, two months after Kamal Jafari Yazdi signing the letter, his 13-year prison sentence was upheld by an appeals court. Jafari Yazdi, a veteran of the Iran-Iraq War, has to serve at least 10 years before eligibility for parole.

Hassan Jafari, the assistant governor in Khorasan Razavi Province in northeast Iran, claimed the arrests were because of “contacts with foreign groups seeking the overthrow of the state [and] had nothing to do with the letter to the Leader”.

The second letter on August 9 was signed by 14 women activists:

As vanguards seeking to free the country, we are determined to say no to the Islamic Republic and continue our struggle in a civil non-violent manner until we achieve all our demands…..

We rise against this anti-woman regime that has wiped out our human values and demand a complete passage from the Islamic Republic and drafting of a new constitution for the establishment of a state in which women’s dignity, identity and equal rights are recognized in all areas.

Seven of the women have been arrested.