TrumpWatch, Day 937: Signs of Economic Slowdown in US and Around World 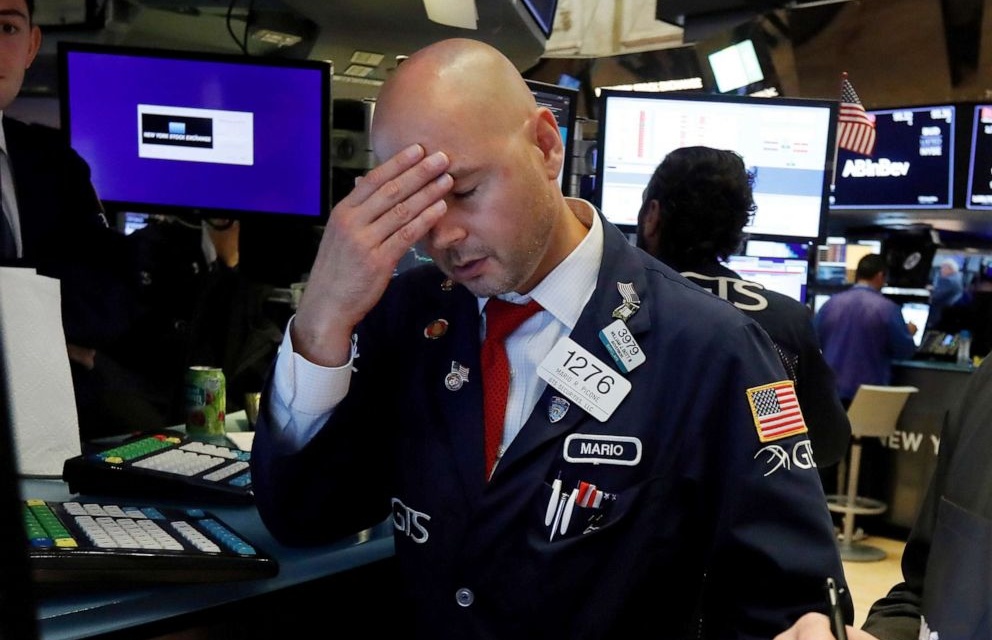 Signs of economic slowdown gather in the US and around the world, posing a challenge for Donald Trump’s re-election effort.

A reliable predictor of US recessions flashed for the first time since the 2008 Great Recession on Wednesday, sending the US stock market to its worst day of the year. The Dow Jones industrial average fell 800 points, about 3% on the day and almost 7% over the past three weeks.

Yesterday’s shock came after an “inverted yield curve”, in which returns on short-term U.S. bonds eclipsed those of long-term bonds. That unusual event points to a loss of confidence in the near-term future of the economy, with the US Government having to pay more for buyers of 2-year rather than 10-year bonds.

That sign of investor worry has preceded every recession in the past 50 years. Chris Rupkey, chief financial economist at MUFG Union Bank, told The Washington Post:

The stars are aligned across the curve that the economy is headed for a big fall. The yield curves are all crying timber that a recession is almost a reality, and investors are tripping over themselves to get out of the way.

The Trump Administration tried to blow a bubble of economic growth with its December 2017 package of $1.5 trillion in tax cuts. The measures contributed to a rise in the stock market, and the US economy added jobs, albeit still at a slower rate than that of the final years of the Obama Administration.

But a convergence of economic factors is now pointing to a slowdown. The tax cuts brought an unprecedented level of Federal Government debt, about $1 trillion this year. Trump’s trade wars, notably with China but also with allies such as Japan and the European Union, has contributed to a contraction in business investment. Manufacturing hiring has ebbed.

The US economy had been growing at 3% per year — about the same rate as in the second term of the Obama Administration — but only expanded 2.1% in the April-June quarter.

The American warnings were compounded by news that Germany followed the UK into negative growth in the quarter ending in June, and that industrial expansion has slowed in China to its lowest level since 2002.

The UK is facing the economic shock, with a projected loss of more than 10% expected growth in GDP, of a No Deal Brexit departure from the European Union on October 31. German exports have been rocked by Trump’s trade war with China.

London’s economy contracted by 0.2% in the last quarter, and Germany’s by 0.1% from April through June. The losses for both countries are projected to continue through a second quarter, meeting the technical definition of a recession.

The slowdowns in China and Germany will mean less demand for US products. While both are have large trade surpluses, China took in about $120 billion of exports and Germany $72 billion of goods and services from the US last year.

Rather than considering US policies, Trump continued his tirade at the US Federal Reserve on Wednesday.

..Spread is way too much as other countries say THANK YOU to clueless Jay Powell and the Federal Reserve. Germany, and many others, are playing the game! CRAZY INVERTED YIELD CURVE! We should easily be reaping big Rewards & Gains, but the Fed is holding us back. We will Win!

Trump has demanded that the Fed cut interest rates, despite concerns that reductions will fuel inflation and do nothing to address the Government deficit. He has repeatedly insulted Chairman Jerome Powell for not complying, despite the Fed’s supposedly independent status from political pressure.

Last month Powell announced a 0.25% cut in the Fed’s interest rate, the first drop in 11 years, to just below 2.25%. However, he said, “Let me be clear. What I said was, it’s not the beginning of a long series of rate cuts.”

Several White House officials are expressing concerned that the economy is weakening, but they are not working on plans. Senior advisors have left the Treasury.

A few hours before his blast of the Fed, Trump issued a nonsensical, feel-good tweet, “Tremendous amounts of money pouring into the United States. People want safety!”

He fumed about China, putting out an incoherent ramble to explain his retreat from the imposition of a 10% tariff on $325 billion of Chinese imports from September 1: “The American consumer is fine with or without the September date, but much good will come from the short deferral to December.”

On Tuesday, the Administration announced the delay of the new tariff on $160 billion of Chinese goods such as smartphones, laptop computers, and children’s toys. Tariffs on about $50 billion have been suspended.

Trump closed the day with recourse to his favorite tactic of a photo-opportunity meeting with a head of state:

I know President Xi of China very well. He is a great leader who very much has the respect of his people. He is also a good man in a “tough business.” I have ZERO doubt that if President Xi wants to quickly and humanely solve the Hong Kong problem, he can do it. Personal meeting?