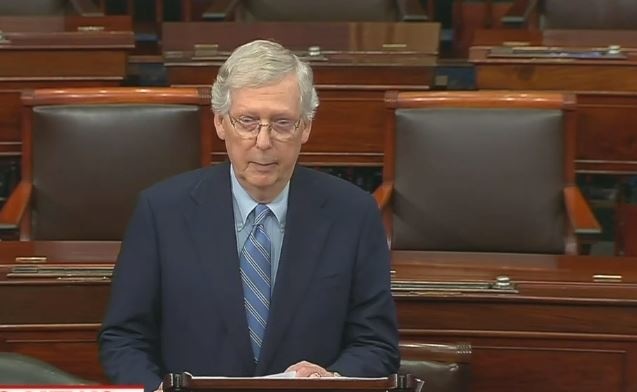 Last Thursday McConnell personally objected on the Senate floor to prevent unanimous consent approval of two bills requiring campaigns to report any attempts at interference, by foreign entities, and one to prevent hacking of the personal accounts and devices of senators and some staffers.

The measures also authorized more than $600 million for updating voting equipment to comply with new standards by 2020.

A day earlier, Special Counsel Robert Mueller told Congressional committee of Russian interference in the 2016 election and the threat in 2020, a Senate committee found Moscow targeted election systems in all 50 states.

Mueller’s answers to the questions of Rep. Will Hurd, Republican of Texas, about election interference

McConnell responded on Monday to a Washington Post opinion column, “Mitch McConnell is a Russian Asset”, addressing the Senate for almost 30 minutes to complain of “modern-day McCarthyism”.

The outrage industrial complex doesn’t let a little thing like reality get in their way. They saw the perfect opportunity to distort and tell lies and fuel the flames of partisan hatred, and so they did.

The Majority Leader used the speech, normally about the Senate’s work week, to assail the Post, the TV outlet MSNBC, and the chamber’s Democrats.

“I was called unpatriotic, un-American, and essentially treasonous by a couple of left-wing pundits on the basis of boldfaced lies,” McConnell complained. “I was accused of aiding and abetting the very man I’ve singled out as our adversary and opposed for nearly 20 years: Vladimir Putin.”

The Senator tried to equate himself with victims in the 1950s of anti-Communist campaigns: “This modern-day McCarthyism was pushed by big-time outlets. The smear that I am, quote, a ‘Russian asset’ ran in the opinion pages of The Washington Post.”

He portrayed his blocking of previous attempts to introduce election security legislation in the Senate as defense against devious US opponents.

I’m not going to let Democrats and their water carriers in the media use Russia’s attack on our democracy as a Trojan horse for partisan wish list items that would not actually make our elections any safer. I’m not going to do that….

Senate Minority Leader Chuck Schumer noted McConnell’s refusal of discussion of legislation, suggesting the Majority Leader might be fearful of provoking Donald Trump’s anger but summarizing, “I still don’t have a really clear idea why Leader McConnell is so adamantly opposed. He has put nothing on the floor on elections.”