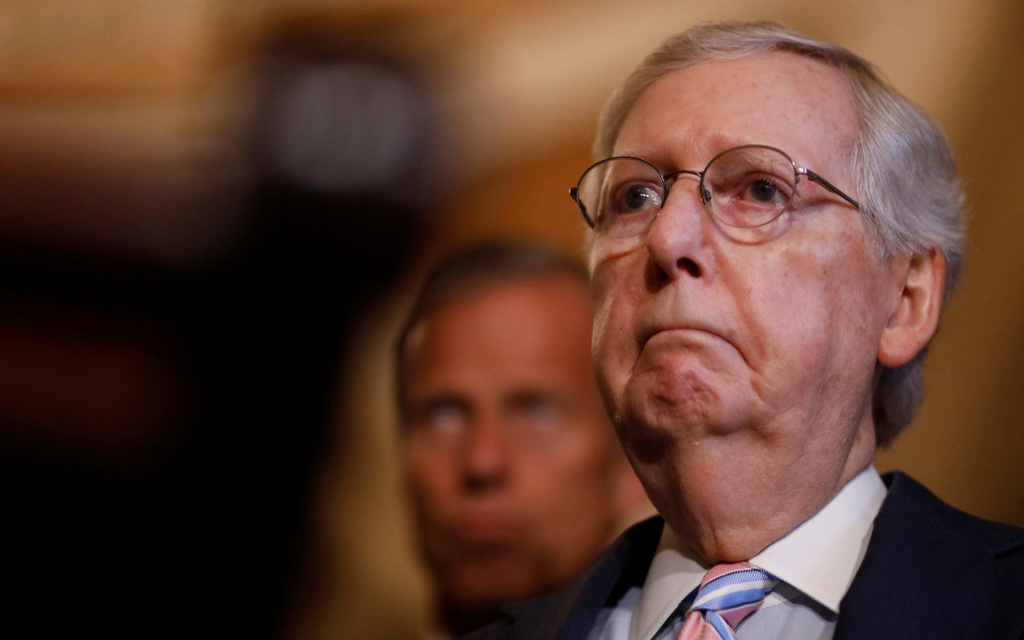 Senate Majority Leader Mitch McConnell blocks consideration of an election security bill, a day after Special Counsel Robert Mueller tells Congress of Russian interference in 2016 and the threat in 2020 — and after a Senate committee finds Moscow targeted election systems in all 50 states.

The objections blocked the attempt of Democratic Senators Mark Warner, Richard Blumenthal, and Ron Wyden to pass the measures with unanimous consent. McConnell and his allies, defying the findings of colleagues and US intelligence services, insist that Congress has already responded to security needs for the upcoming election.

Two of the bills require campaigns to report to federal authorities on any attempts by foreign entities to interfere in US elections. The third tries to prevent hacking of the personal accounts and devices of senators and some staffers.

McConnell alleged that the bills are supported by Democrats who set out the “conspiracy theory” of the Trump campaign’s links with Russian officials — a “conspiracy theory” backed by the Mueller Report’s findings of “numerous” Trump-Russia contacts.

Russian Interference “Among Most Serious” Challenges

Mueller told the House Judiciary and Intelligence Committees on Wednesday:

Over the course of my career, I’ve seen a number of challenges to our democracy. The Russian government’s effort to interfere in our election is among the most serious….This deserves the attention of every American….

They’re doing it as we sit here.

TrumpWatch Video Special: This Ain’t Columbo — Mueller’s Suspect Likely to Get Away With The Crime

On Thursday, the bipartisan report of the Senate Intelligence Committee described “an unprecedented level of activity against state election infrastructure”, searching for vulnerabilities in the security of election systems.

The findings concluded that Russia may have “intended to exploit vulnerabilities in the election infrastructure during the 2016 elections and, for unknown reasons, decided not to execute those options”. It suggested Moscow have been cataloging options “for use at a later date”.

In a confusing statement, Sen. Hyde-Smith defended her rejection of election security with a call to “fight Russian meddling”:

The House hearings rehashed what we already knew. There was no collusion. Let’s move forward to fight Russian meddling, get past the partisan wild goose chases, and work on issues that matter to everyday Americans.