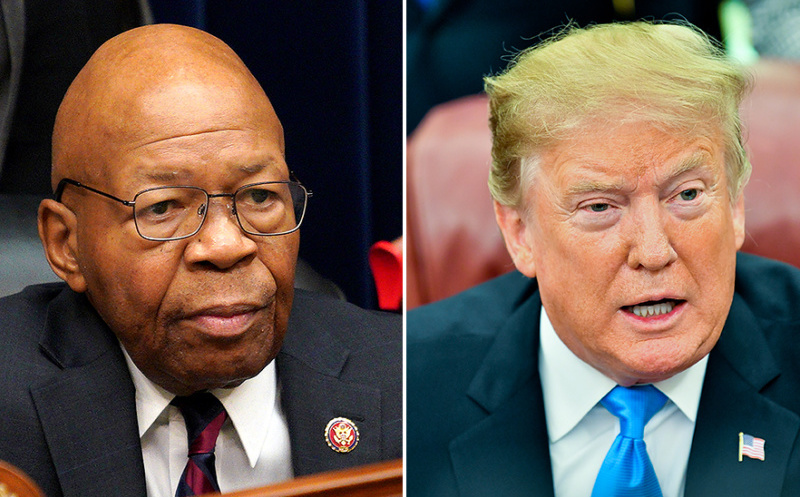 Unsettled by Congressional investigations of his finances, links with Russia, and obstruction of justice, Donald Trump attacks on Twitter throughout Saturday.

Trump proclaimed victory on Thursday after Special Counsel Robert Mueller’s testimony to two House committees — despite indicating that Trump only escaped indictment because he is a sitting President — failed to deliver a knockout blow. Yet he betrayed his worry with messages throughout Saturday complaining about the “hoax” by the “clowns” of the Democrat Party: “NO COLLUSION, NO OBSTRUCTION, TOTAL EXONERATION. DEMOCRAT WITCH HUNT!”

Still, much of Trump’s fury was spent on another front: seven tweets attacking Rep. Elijah Cummings of Maryland, the head of the House Oversight and Reform Committee.

Apparently triggered by a hit piece on Cummings by Fox and Friends — his favorite TV show — Trump labelled the representative a “brutal bully” and called his constituency, the city of Baltimore, a “disgusting, rat and rodent infested mess”, and a “very dangerous & filthy place”. He renewed the assault throughout the day, accusing Cummings of corruption that did “nothing but milk Baltimore dry”.

The tweet-storm revived claims of Trump’s racism, following his two-week tirade telling four Democratic Congresswomen of color — three of whom were born in the US — to “go back to their countries”. House Speaker Nancy Pelosi and Sen. Elizabeth Warren criticized the latest invective:

.@RepCummings is a champion in the Congress and the country for civil rights and economic justice, a beloved leader in Baltimore, and deeply valued colleague. We all reject racist attacks against him and support his steadfast leadership. #ElijahCummingsIsAPatriot https://t.co/2LG8AuQrHh

Sen. Elizabeth Warren: "Elijah Cummings is one of my dearest friends. He is a good man through and through, and he fights for what is just in this country. To be attacked by a President issuing racist tweets is beyond insulting, it is disgusting." pic.twitter.com/274ZGetyla

Trump’s tweets also showed his sensitivity over the revelations of the inhumane conditions in detention centers for migrants. Like Alexandra Ocasio-Cortez, one of the four Congresswomen targeted by Trump’s insults and lies, Cummings has highlighted conditions at the overcrowded Texas facilities.

In the past two months, lawyers, activists, and the Department of Homeland Security have all exposed the lack of hygiene, poor food, and denial of essentials such as toothbrushes and blankets for migrants, including women and children, living in filth and illness.

Fox and Friends tried to counter-attack on Saturday, over a Republican activist’s footage of boarded-up houses in Baltimore, by insisting, “Living conditions at the border are better than most areas in his district.”

But Trump and Fox TV may also have been prompted by Cummings’ leadership of the House Oversight and Reform Committee, which is trying to investigate Trump’s taxes, finances, and business interests and operations.

The White House has tried to block the inquiries. Treasury Secretary Steven Mnuchin has prevented the Internal Revenue Service from handing over years of Trump’s tax returns. Trump lawyers have ordered his accountants Mazars USA to refuse a subpoena for financial statements, and the Trump Organization is fighting against provision of records both at Federal and state level.

Trump has been accused of conflicts of interests and of financial benefit from the Presidency. In February, his former lawyer and fixer Michael Cohen testified to Congressional committees that Trump may have committed tax and insurance fraud by falsely inflating his assets.

On Thursday, the Committee voted on party lines to subpoena all work-related texts and emails sent or received by White House officials on personal accounts, with Trump’s daughter Ivanka and son-in-law Jared Kushner admitting that they have used their accounts for Government work.

Trump tipped off his anxiety in one of the tweets by chiding, “Elijah Cummings spends all of his time trying to hurt innocent people through ‘Oversight’.”

Cummings responded by linking the Oversight Committee’s responsiblities and his work in Baltimore:

Mr. President, I go home to my district daily. Each morning, I wake up, and I go and fight for my neighbors.

It is my constitutional duty to conduct oversight of the Executive Branch. But, it is my moral duty to fight for my constituents.

The Representative noted that on Friday, “I held a hearing on the skyrocketing prices of prescription drugs and the financial hardships that families across the nation, and in Baltimore, are facing.” He said Trump had promised two years ago to help him but implied that the Administration failed to deliver: “I took you at your word.”

Baltimore’s leaders stood alongside Cummings. Mayor Bernard Young of Baltimore said it was “completely unacceptable” to “denigrate a vibrant American City like Baltimore” and added, “Mr. Trump, you are a disappointment to the people of Baltimore, our country and the world.”