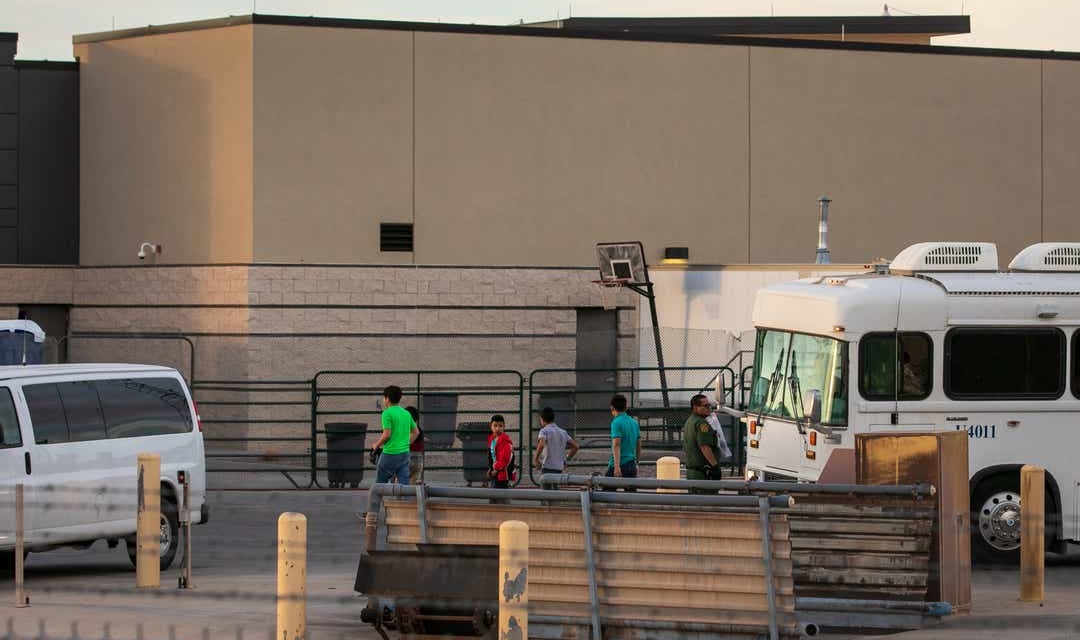 Unaccompanied children are taken into the migrant detention facility in Clint, Texas (File)

Border Patrol leaders have known for months of inhumane conditions for children detained in the center in Clint, Texas.

The center has become a catalyst for concern about the ill treatment of migrants under the Trump Administration’s “zero tolerance” policy. Last month, lawyers were so troubled by what they had seen that they spoke with media about the conditions.

The lawyers, who toured the facility after a court order for entry, spoke of hundreds of children in dirty diapers and mucus-stained clothing in the overcrowded center.

Flu and lice outbreaks were going untreated, and children were filthy, sleeping on cold floors, and taking care of each other because of the lack of attention from guards. Some of them had been in the facility for weeks….

Most of the young detainees have not been able to shower or wash their clothes since they arrived at the facility….They have no access to toothbrushes, toothpaste, or soap.

Staff have now told The New York Times and The El Paso Times of outbreaks of scabies, shingles and chickenpox among the children held in cramped cells. The stench of dirty clothing was so strong it spread to the agents’ own clothes. Children cried constantly, and one seemed likely to try to kill herself.

A veteran agent described orders to take beds away from children to make more space in holding cells: “It gets to a point where you start to become a robot.”

“Nobody Was Listening to Us”

However, their declarations were refuted by the Department of Homeland Security’s Office of the Inspector General, which warned in a detailed report of the “immediate risk” of severe overcrowding, with some asylum seekers desperately trying to escape. Some detainees were held in standing-room-only conditions, and a diet of bologna sandwiches was causing constipation and other illnesses.

Instead of trying to alleviate the conditions at Clint, the Border Patrol’s leadership put even more migrant into the facility, raising concern among staff.

In January, Customs and Border Protection officials ordered Hull to a meeting in Washington, concerned that he acted too slowly to put safety measures in place after the deaths of migrant children. Hull implemented procedures, but the officials still believe Hull and and Matthew Harris, the chief of the Clint station, have been slow to follow directives as the numbers grew at the facility.

But tension has persisted between Mr. Hull and officials in Washington, particularly in recent months, as the number of migrants continued to increase at his facilities. The officials believe that Mr. Hull and communicate developments at the facilities in their sector, according to two Homeland Security officials.

Clint was intended to hold about 100 adult men, and only for a few hours of processing before being transferred to other locations.

Three agents said they had seen unaccompanied children as young as 3, and lawyers said detainees were as young as 5 months old. An agent explained:

We have little ones that need their diapers changed, and we can’t do that. We can’t carry them or change diapers. We do ask the older juveniles, the 16-year-olds or 17-year-olds, to help us out with that.

Before the lawyers’ revelations, there were more than 700 children in the center. After the exposure, agents took all but 30 children out of Clint but then moved more than 100 back into the station days later.

Some families and adult men have also been held.

Congress passed a $4.6 billion aid bill in late June, but the Republican-led Senate blocked the effort of the Democratic-led House to include oversight and enforcement provisions.

Donald Trump insisted on Saturday that all is well at the migrant detention facilities.

President Trump on border facilities: "When people come in illegally and then it's crowded. And I've seen some of those places and they are run beautifully. They're clean. They are good. They do a great job." pic.twitter.com/0pKlHsXzFS