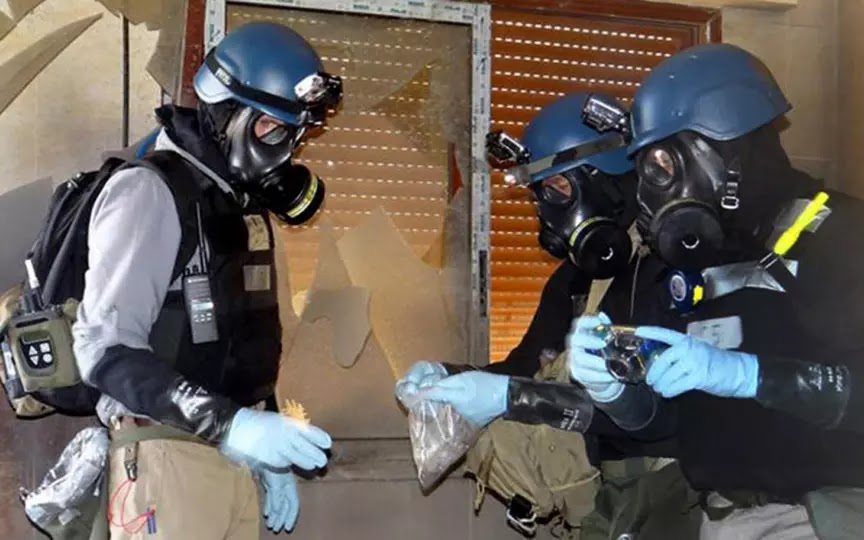 A new inspections team of the Organization for Prohibition of Chemical Weapons, with the authority to attribute blame, will investigate nine chemical attacks in Syria — including the April 2018 use of chlorine in Douma near Damascus, which reportedly killed 43 people.

Sources confirmed the scope of the inquiry to Reuters, more than a week after OPCW head Fernando Arias confirmed that the Investigations and Identification Team had begun assessment of evidence:

[The team] has initiated its work to identify the perpetrators of the use of chemical weapons in the Syrian Arab Republic….[It will be] identifying and reporting on all information potentially relevant to the origin of those chemical weapons.

Reporting to a meeting of OPCW member states which began on Tuesday, Arias said the inquiries will take place over three years: “A preliminary list of incidents for investigation has been established, and contact with member states and with international, regional, and local actors is being sought.”

The OPCW is defying a sustained Russian and regime campaign to block the IIT, including the regime’s denial of visas and propaganda and disinformation to undermine the organization by Moscow, Damascus, and supporters such as a UK-based “Working Group” and pro-Assad bloggers.

Despite Russian and regime objections, OPCW member states authorized the IIT in June 2018, following Moscow’s blocking of its predecessor the Joint Investigative Mechanism.

Russia cast a Security Council veto in October 2017 to prevent an extension of the JIM’s mandate, after the inspectors found that the Assad regime carried out a sarin attack in northwest Syria in April 2017 which killed about 90 people and wounded hundreds.

The JIM also found the regime culpable for a series of chlorine attacks since 2014. UN inspectors have assessed that, during the same period, the Assad regime carried out 33 chemical attacks, while the Islamic State used mustard agent on six occasions.

The Russian-regime disinformation campaign has centred on Douma, the last opposition city holding out near Damascus amid a two-month Russian-regime offensive which killed and wounded thousands of people.

On April 7, 2018, a building was struck with a cylinder containing chlorine. Witnesses said 43 people, who had been sheltering in the basement, were killed as the chlorine funneled down through the building.

The opposition surrendered the next day.

On March 1, the OPCW’s Fact Finding Mission issued its final report concluding that there were “reasonable grounds” that a “toxic chemical” had been used as a weapon.

The FFM does not have the mandate to assign responsibility, but other evidence and multiple sources indicate that an Assad regime helicopter dropped the deadly cylinder. A second cylinder landed in another Douma building, but the chlorine canister was not detonated.

See also Solving a Mystery: The Deadly Chemical Attack on Syria’s Douma and a New Document

On Tuesday, OPCW member states gave full support to the organization’s staff. Multiple delegations said they were “watching with concern a growing coordinated effort to undermine this organization”, and criticized “efforts from a number of actors to conduct smear campaigns…, circulate false information, and attempt to discredit the OPCW as an institution”.

The delegations said the Assad regime may not have complied with the requirement, after its sarin attacks that killed more than 1,400 people near Damascus in August 2013, for the handover of chemical stocks and demolition of facilities. Instead, there was “growing evidence of deliberately false declarations by Syria, destruction of possible evidence, and the alarming likelihood that Syria continues to possess Schedule 1 chemicals” such as nerve agents.

Russia has tried to counter the announcement of the IIT’s work with a declaration by Deputy Foreign Minister Sergey Ryabkov:

We will soon present additional data gathered by our experts and social activists regarding the Douma incident. As I see it, a relevant presentation will be held in the Hague tomorrow and we will present new data on July 12 and we will invite journalists.