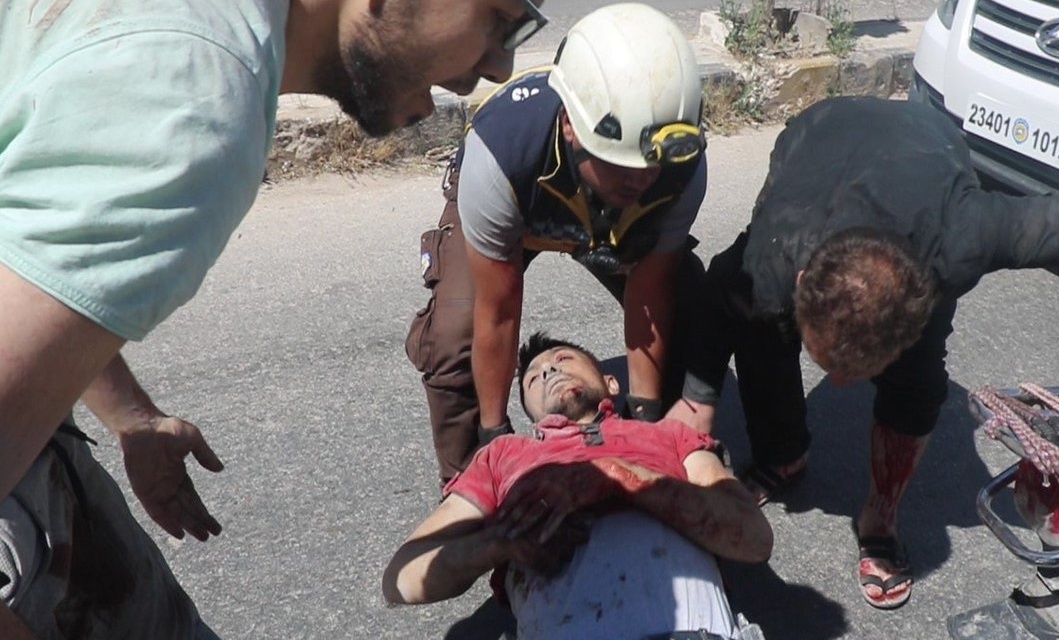 Russian and Assad regime attacks have killed at least 544 civilians in Idlib Province in northwest Syria since late April, according to a leading pro-opposition monitor of the conflict.

The Syrian Network for Human Rights said 2,117 civilians have been injured. Of those slain, 130 are children.

More than 330,000 of Idlib and northern Hama’s 3 million population — about 20% of those remaining in Syria — have been displaced. Thirty medical centers have been attacked, and several rescuers slain.

Fadel Abdul Ghany, chairman of SNHR, said, “The Russian military and its Syrian ally are deliberately targeting civilians with a record number of medical facilities bombed.”

Last Friday at least 12 civilians, most of them children, were killed when the town of Muhambal was struck by warplanes and by helicopters which dropped barrel bombs. Three people were killed in the first wave, then the warplanes attacked civilians who were fleeing the initial bombing.

Our Correspondent Obaida Hitto visits Idlib's Mhambel town, the site of deadly Syrian regime attacks in which at least 14 civilians were killed, including seven childrenpic.twitter.com/SOgLaxcMwn

Last Thursday the Kafrnabel hospital was the 30th facility bombed during the assault.

“To have these medical facilities bombed and put out of service in less than two months is no accident. Let’s call this by what it is, a war crime,” said Dr Khaula Sawah, vice president of the US-based Union of Medical Care and Relief Organisations, which supports the medical centers.

Despite the assault on civilians, the Russia-regime offensive has been unable to break resistance. Enabled by Russian airstrikes and advisors on the ground, Assad forces quickly took several towns and villages in northwest Hama but was soon checked by Turkish-backed rebels and the Islamist bloc Hay’at Tahrir al-Sham. A counter-attack last month regained some of the territory.

In a 23-page report, the SNHR documented the killing of 1,864 civilians, including 468 children and 285 women, from January through June.

The total includes 15 medical personnel, six media workers, and six rescuers. Of the victims, 159 were tortured to death.

In June, amid the offensive in the northwest, 347 civilians were killed. Among these were 91 children and 39 women, and 18 people slain by torture.

Of more than 435 attacks on vital civilian facilities — 87% by Russia and the Assad regime — at least 43 included cluster munitions and at least 17 used incendiary munitions.

The SNHR added documentation of at least 2,460 arbitrary arrests in the six months, including of 117 children and 122 women.