Iran Daily: Revolutionary Guards — UK and US “Will Seriously Regret” Seizure of Supertanker 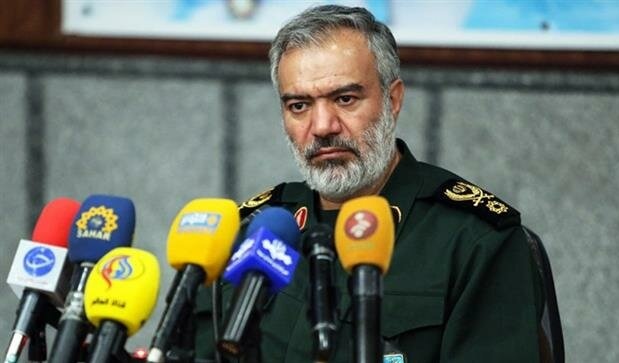 While denying that it tried to intercept a British tanker, Iran’s Revolutionary Guards say the UK and US will soon “seriously regret” last week’s impoundment of an Iranian supertanker.

Rear Adm. Ali Fadavi (pictured), the second-in-command of the Guards, told an audience in Isfahan in central Iran on Thursday:

The enemies would have not undertaken such measures had they chosen to exercise the least bit of prudence….They however took such a move and will seriously regret doing it.

On July 4, UK Marines and Gibraltarian police boarded the Iranian supertanker Grace 1 at the mouth of the Mediterranean. The UK Government said the vessel, with up to 2 million barrels of oil, was in Gibraltar’s waters and violating European Union sanctions on oil deliveries to the Assad regime in Syria.

Iranian military commanders said they would seize a UK ship in response, and President Hassan Rouhani declared, “You are the ones initiating insecurity, and will come to realize its consequences in the future.”

About the time of Rouhani’s announcement, three Revolutionary Guards speedboats approached the tanker British Heritage in the Strait of Hormuz, through which 1/6th of the world’s oil passes, according to the UK Government and US officials.

The Revolutionary Guards denied the incident, “Over the last 24 hours there have been no encounters with foreign vessels, including British vessels.”

UK authorities later said that the speedboats had ordered the British Heritage to move north out of disputed waters, into an area which is clearly Iran’s. HMS Montrose then aimed its guns at the boats to ward them off.

The tanker had been due to collect oil in Basra, Iraq, but abruptly turned around last Saturday after receiving UK Government advice.

The UK Government has put British ships in the Persian Gulf on the highest state of alert.

Officials said the raising of the alert to Level 3 was made on Tuesday, before the reported showdown between the Revolutionary Guards speedboats and the HMS Melrose.

Between 15 and 30 large UK-owned vessels travel through the Gulf every day.

Trying to defuse any conflict, UK officials said the Royal Navy “will be resolutely defending British maritime interests in the Gulf, but has no interest in escalating the situation”.

With only HMS Montrose and three minesweepers in the area, the UK does not haves the capacity to escort all British-linked ships through the Strait of Hormuz.