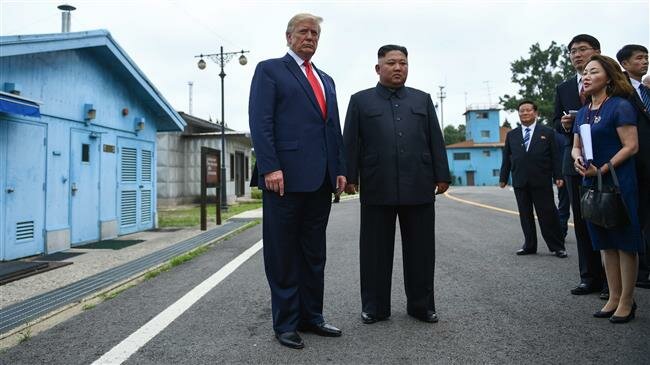 During the G20 summit in Osaka, Japan, Trump issued a Twitter invitation on Saturday to Kim. Despite no steps by North Korea towards “denuclearization” since the historic first meeting in June 2018 — and Kim’s dramatic walkout from the second summit in February — Trump said, “If Chairman Kim of North Korea sees this, I would meet him at the Border/DMZ [demilitarized zone] just to shake his hand and say Hello(?)!”

During a news conference in Seoul alongside South Korean President Moon Jae-in, Trump said the North Koreans had accepted the invitation. He repeated his affinity for Kim:

We are going to the DMZ border, and we will be meeting Chairman Kim.

I look forward to it very much….[There is] a lot of good feeling. He understands me, and I think I understand him.

US officials had objected to a third meeting unless a significant agreement was negotiated in advance, preventing another high-profile failure. But Trump insisted on the effort for Kim to join him in the demilitarized zone.

Trump is likely to replicate the historic handshake between Kim and South Korean’s Moon in the DMZ in April 2018 — the first time leaders had crossed into each other’s territory since the end of the Korean War in 1953.

Since Kim walked out on the Vietnam summit in February, North Korea has refused to respond to either the US or South Korea. There have been rumors of punishment and even execution of senior North Korean officials leading the negotiations with Washington. Pyongyang also launched short-range missiles in May in violation of UN restrictions.

However, in recent weeks North Korea stepped up its diplomatic effort. Kim exchanged letters with Trump, and has also met with President Vladimir Putin of Russia and with Chinese leader Xi Jinping.

While embracing Kim — a sharp contrast to his coolness and even insults of leaders of US allies — Trump was vague about any substance in their encounter:

There’s a good feeling, so it could be very good. As far as another meeting, let’s see what happens today before we start thinking about that.

Moon played along by flattering his guest:

President Trump is the maker of peace on the Korean Peninsula, you really are the peacemaker of the Korean Peninsula. I hope that this meeting with Chairman Kim at Panmunjom will bring hope to the people of South and North Korea and it will be a milestone in the history of humankind toward peace.