Syria Daily: Recovery? Not in Aleppo 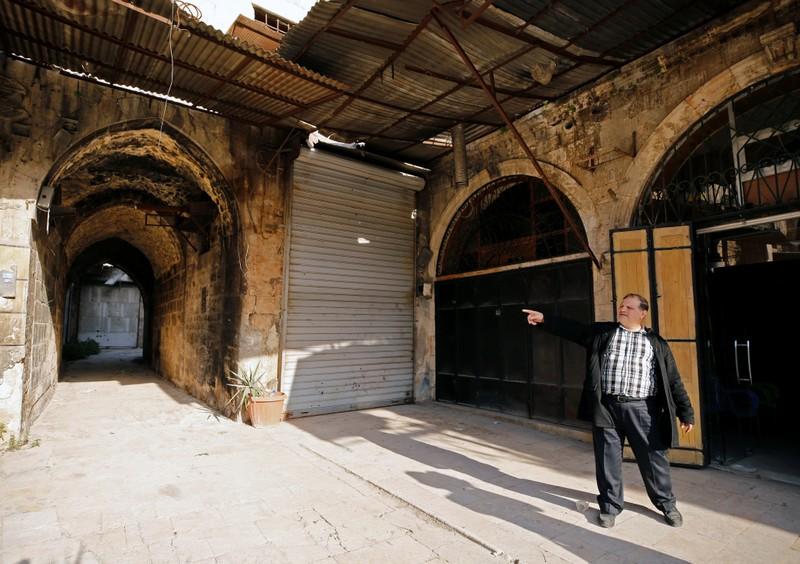 Zakariya Azizeh, a cloth merchant in the near-deserted market in the Old City of Aleppo, Syria, April 9, 2019 (Omar Sanadiki/Reuters)

After 99 months of conflict, Syria’s Assad regime is proclaiming “recovery” in areas which it has recaptured from the opposition.

But in the east of Syria’s largest city Aleppo, retaken in December 2016 with more than 50,000 people forcibly removed, evidence of that recovery is scarce, according to a report by Reuters’ Angus McDowell.

McDowell tours a stone courtyard off Aleppo’s medieval souk and finds all but two of the 41 cloth shops deserted.

Mohammed Abu Zeid, one of the two remaining cloth merchants, explaining, “Some started new work outside Syria and won’t return. Some who stayed opened new shops in other parts of the country.”

Parts of western Aleppo city, held by the regime through the conflict, still have busy shopping areas but factories and wholesale trading businesses have been devastated, including in the textile hub in the Souk al-Zarb section of the Old City.

Thirteen shop owners have moved abroad, mostly to Egypt or Turkey. Six moved to Damascus or other cities, and seven who remained in Aleppo stopped dealing. Ten others working in the cloth trade from market stalls or rented shops in other parts of Aleppo.

“I Haven’t Any Money”

About half of Syria’s pre-war population of 22 million left their homes during the conflict. About six million were internally displaced, and more than 5.6 million are registered refugees. Despite the regime’s proclamations of “reconciliation”, the UN says only 56,000 refugees returned last year, although it estimates up to 250,000 could come back this year.

Most refugees are unwilling to return home because of fears of detention, reprisals, forced conscription, and uncertainty about the status of their property and livelihoods. Those who are considering a return are often affected by the regime’s restriction on who may come back and a lengthy process of review and paperwork.

For businessmen, there are the economic obstacles. In the Aleppo cloth market, Zakariya Azizeh says, “We cannot export and we have banking problems from sanctions. The system depends on credit, but I haven’t any money.”

Abu Zeid hopes most of those who left will eventually return: “This is the best khan for import-export. The others, they tell us ‘one month, two months, we will come back’.”

But in the souk, a group listed friends and neighbors who are gone.

“Some of them have come back to see what the situation is like. When they see it, they go away again,” said Mohammed Fadel, who has two shops in the souk, both now closed,

From the Old City souk to the industrial zones on Aleppo’s outskirts, shops and warehouses were stripped of inventories and factories and workshops of their equipment and machinery. Many are filled with rubble.

Aleppo’s power plant was destroyed and electricity supplies from other parts of government-held Syria are limited. Water provision is intermittent.

Despite a textile workshop with four machines and 400 workers, Mohammed Fadel says, “What can I do? I sit here all day doing nothing.”