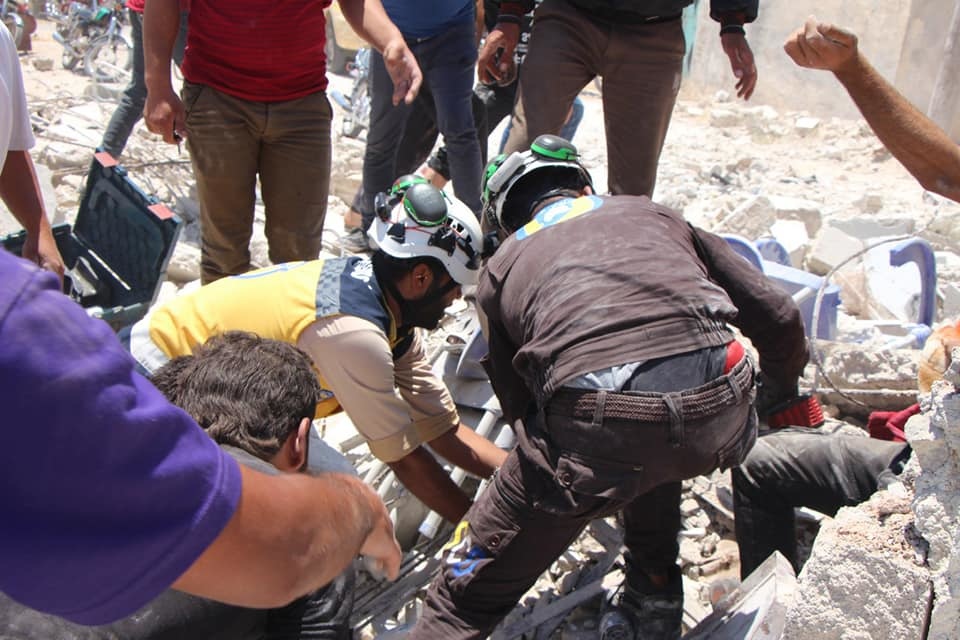 Residents, activists, and White Helmets rescuers reported attacks on towns such as Saraqeb, Kafranbel, and Josef. Rockets, including with incendiary munitions, were fired overnight on Khan Sheikhoun.

Among the victims were five people, including three children and a woman, in Josef in southern Idlib and five members of a family in Saraqeb. Two more people were slain in Kafranbel.

They called out but to no avail.. In the blink of an eye, Regime warplanes ended this family in #Saraqib City yesterday, Mohammed al-Dani, his wife Duha, their children Khalid and Hamza, and their grandmother Falak. All were buried under the rubble when a bomb dropped on it. pic.twitter.com/OpsHU3kADl

Syrian warplanes attacked Kafranbel city, at today noon. This airstrike caused the injury of two civilians and a large destruction in civilian's houses.
The killing of civilians continues in Idlib and the world watches silently.#save_Idleb #Rise4Idlib #save_civilians pic.twitter.com/U8teAOOKCq

Since late April, about 400 civilians have been killed and hundreds more have been wounded by Russian and regime bombardment. More than 330,000 have fled their homes, with almost 30 medical centers damaged or destroyed.

An estimated 3 million people — about 20% of Syria’s remaining population — live in northern Hama and Idlib Provinces.

A Russian-regime offensive began on May 6 and took several towns in northwest Hama in the initial days of the May 6 offensive. However, the assault has stalled despite Moscow’s airstrikes and ground advisors, and has been under pressure since rebels counter-attacked three weeks ago.

On June 12, Russia said that it had agreed a ceasefire alongside Turkey, another guarantor of a now-shattered demilitarized zone in Idlib and northern Hama Provinces, but the Assad regime never paused its attacks.

1- Khalid Al-Dani is little angel from #Saraqib City in #Idlib, here he shows his certificates of excellence in school. Yesterday, regime warplanes killed him, his parents, his brother and their grandmother. pic.twitter.com/FXAiuSADou