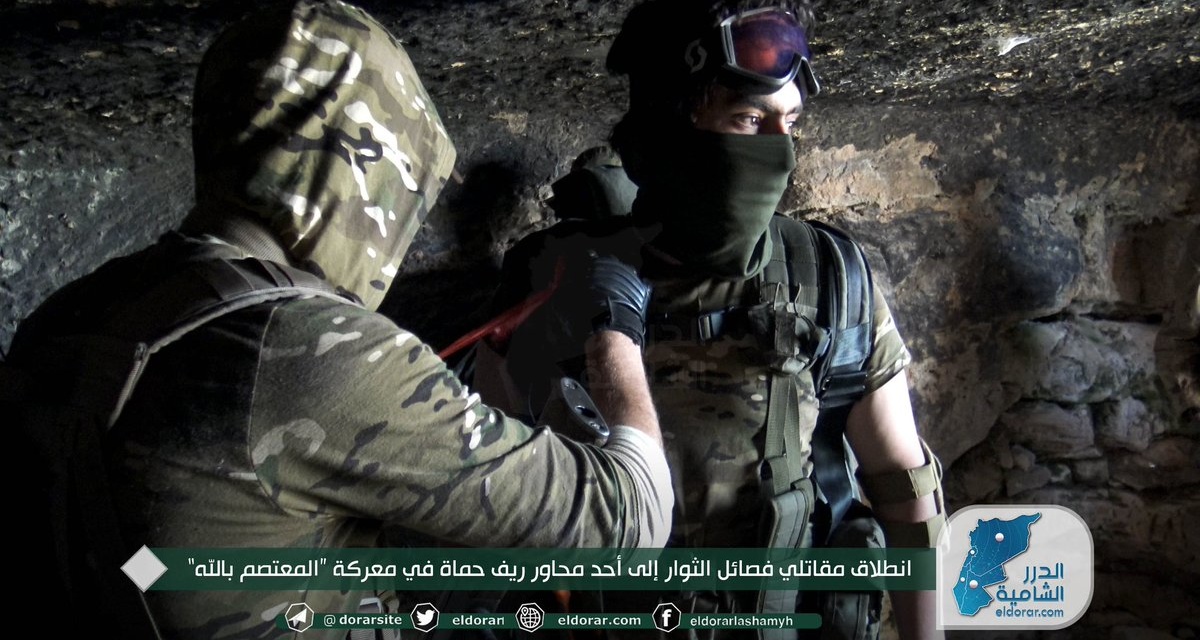 An anti-Assad fighter prepares for a counter-attack against regime forces in northwest Hama Province, Syria, June 6, 2019

UPDATE, 1630 GMT: Anti-Assad forces have launched the second phase of the counter-attack that began Thursday.

This morning the Assad regime’s military, through a pro-Assad blog, tried to proclaim that it had “retaken almost all of the territory they lost”, including the hilltop town of Tal Maleh.

However, the claim appear to be belied by video of pro-Assad warplanes continuing to bomb Tal Maleh, while — as local activists noted — ignoring rebels in nearby fields.

Russia and the regime are continuing airstrikes in an attempt to break the counter-attack but face difficulty because rebels have not put up garrisons in regained territory and are using supply lines, moving lighter equipment, which are not as vulnerable to attack.

Most of the forces in the counter-attack are from the Turkish-supported National Liberation Front, with some from the Islamist bloc Hay’at Tahrir al-Sham.

Footage from the frontline near Tal Maleh:

Meanwhile, Russia and the regime are bombing civilian areas in Idlib Province.

Pro-opposition activists say rebels and the Islamist bloc Hay’at Tahrir al-Sham captured several villages in northwest Hama Province in an assault that began Thursday morning across a 20 to 25-km (12 to 15-mile) front.

The counter-attack is at the gates of Kafr Naboudah, a town which has changed hands three times since regime forces, enabled by Russian airstrikes and advisors on the ground, launched the offensive of May 6. By midnight, the anti-Assad forces had reached Kernaz, just to the south of Kafr Naboudah.

Footage showed the counter-offensive inside the village of Jubayn, with images of regime troops killed in the battle.

The pro-Assad blog Al Masdar said Russian forces had withdrawn from a base in Tal Salba.

A “military source” told the site that more than 30 pro-Assad troops had been killed by the counter-attack.

Local sources said the Turkish-backed rebel National Liberation Front and HTS had announced a media blackout, indicating that operations will be “more than hit-and-run battles and repelling regime offensives”.

Last week the NLF and HTS announced consolidation through an operations rooms and formation and training of specialist units, led by locals who know the terrain.

The Russian-regime offensive, shattering a demilitarized zone declared by Moscow and Turkey last September. initially seized several towns in northwest Hama Province. However, it was soon held up by the counter-attacks.

Meanwhile, Russia and the regime bombed and shelled Idlib and northern Hama Provinces, home to about 3 million people — about 20% of Syria’s remaining population.

Since April 28, about 300 civilians have been killed by the bombardment. Hundreds more have been wounded and more displaced, bringing the total to more than 300,000. Almost 30 medical facilities have been destroyed or damaged.

Even before the launch of the offensive, the Assad regime had escalated attacks on Idlib Province while Russia carried out occasional airstrikes, insisting that it was targeting “terrorists”.

The Russia-regime attacks are also targeting crops in western Aleppo Province, hoping to choke off food supplies in the northwest.