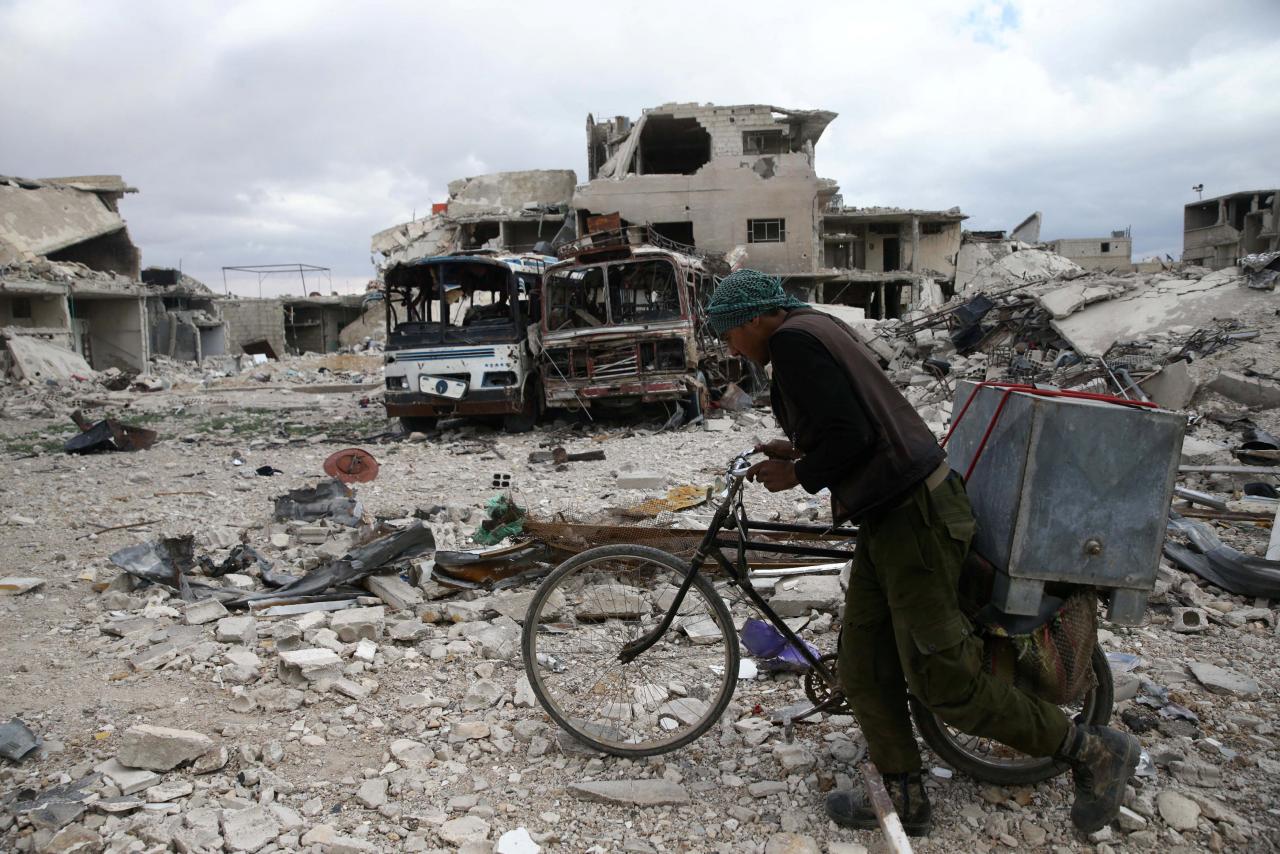 Concerned about further blame of the Assad regime, Russia has stepped up its campaign to undermine investigation of chemical attacks in Syria.

For years Russia, the regime’s essential ally, has tried to shield Bashar al-Assad from the work of the Organization for the Prohibition of Chemical Weapons.

UN inspectors have found the regime culpable for 33 chemical attacks since 2014. The OPCW has specifically attributed responsibility for several chlorine attacks and an assault with the nerve agent sarin, which killed about 90 people and injured hundreds in Khan Sheikhoun in northwest Syria in April 2017.

From 2015 to 2017, the OPCW was able to attribute responsibility. But after its report on Khan Sheikhoun, Russia vetoed an extension of the organization’s Joint Investigative Mechanism.

In June 2018, other OPCW members pushed back. Over the objections of Russia, Iran, and the Assad regime, the Conference of State Parties authorized a new group — the Investigations and Identification Team — which can issue findings of blame.

For Moscow and the regime, the situation has come to a head because of an OPCW report on the chlorine attack on Douma, in the East Ghouta area near Damascus, on April 7, 2018.

The opposition was holding out in Douma, its last position in East Ghouta after a two-month Russian-regime offensive that killed and wounded thousands of civilians. Amid heavy conventional bombing, a building was struck by a chlorine canister which lodged in a roof balcony. The downward funnel of the toxic gas trapped people coming up from the basement to leave the building, killing 43 of them.

Opposition forces surrendered the next day, and Russian and regime forces took control of Douma — including the site of the suspected attack and of the area where victims had been buried.

On March 1, 2019, the OPCW’s Fact-Finding Mission issued a report finding “reasonable grounds” that a toxic substance had been released in the building.

With the FFM only establishing facts, the IIT will now conduct further investigation as it considers responsibility for the attack.

Russia tipped off its concern in a statement by its OPCW representative, Alexander Shulgin, on March 11:

There’s absolutely no doubt that this attribution team will draw the conclusion necessary for the American side, and this will be for the US and their allies yet another reason to maybe carry out new unilateral actions against the Syrian authorities.

Inside the OPCW: The Russian Statement

But how to prevent the ITT mission going to Douma?

The statement attacked the organization’s credibility, alleging that OPCW staff and laboratories had been deceptive or irresponsible in the handling of environmental samples and biomedical samples from victims.

Still, the document does not address — and thus challenge — the environmental and biomedical evidence. So its more significant passage is the claim that three sets of OPCW experts in three countries are wrong over the deadly chlorine canister that struck the Douma building on April 7.

The Russians do not challenge the finding of chlorine, although they question if a “toxic chemical” was used as a weapon.

Most of their effort, through a series of assertions, is dedicated to dismissing the possibility that an Assad regime helicopter dropped the canister.

Instead, Russia insisted that there was “false evidence” and the “staged character of the incident”, with the deadly canister — and a second one which failed to detonate in another building — being placed by unnamed perpetrators.

Outside the OPCW: The Leaked Assessment

In the interim, a pro-Assad UK group obtained a dissenting assessment from a consultant and former OPCW Inspection Team Leader, Ian Henderson.

The engineering assessment was initially submitted to the OPCW FFM at an unknown date, as the organization also considered the findings from its three sets of experts. On February 27, two days before the final report was published, Henderson wrote a revised version and asked for it to be circulated.

The memorandum insisted that the deadly chlorine canister could not have fallen from a height above 500 meters, ruling out a drop by a regime helicopter. Henderson goes farther in speculating that “there is a higher probability” that the canister and its counterpart in a second building were “manually placed”.

Both the authority and the technical analysis of the dissent have been questioned. Henderson writes the note in the name of a “FFM engineering sub-team”, but signs in a personal capacity. There is no other information about the sub-term, although the Working Group on Syria, Propaganda, and Media — who received the leaked document — says the consultant worked with “two European universities”.

Other analysts have raised issues with Henderson’s computer-modelling, the inaccurate scale of his drawings, his assumptions about the fall of the cylinder, and his inaccurate statements about the crater caused by the deadly cylinder and the evidence of chlorine.

But the publication of the Russian document raises another issue: is there a connection between Moscow’s initiative inside the OPCW and the leak of the Henderson assessment?

The Working Group posted the leaked assessment on May 13, within 72 hours of receiving it.

But the Russian statement of April 26 has passages which are remarkably similar to Henderson’s assertions — including the central allegation:

The parameters, characteristics and exterior of the cylinders, as well as the data obtained from the locations of those incidents, are not consistent with the argument that they were dropped from an aircraft.

So did the Russians obtain Henderson’s dissent and then reproduce passages?

And who then e-mailed the full assertion to the Working Group on Syria, Propaganda, and Media two weeks later?

The Working Group claimed that it was claimed by “multiple” OPCW staff. But it has provided no evidence that it had any source other than the anonymous person who e-mailed Group member David Miller, an academic at the University of Bristol, about May 10. Questioned about the claim, another Group member Piers Robinson — who left the University of Sheffield earlier this year — could not offer any answer.

On May 21, the OPCW published its responses both to an Assad regime note of March 11 and the Russian document of April 26, which reproduced the regime assessments while adding the objections echoing the Henderson assessment.

The organization countered the Russian objections on environmental and biomedical samples by detailing the processes of the investigation.

It then sharply rebuffs the Russian statement, effectively by saying that Moscow worked backwards from a straw-man assumption — the height from which the chlorine canister was dropped — rather from the starting point of data.

The analyses of the FFM are based on the facts and data collected and corroborated by the team and not on assumptions. In this context, the FFM report on the Douma incident does not contain assumptions or statements about the use of a helicopter (or any other craft) and the height of flight.

The OPCW then stands on the authority of that data and its experts’ analyses to knock back the Russian challenges over the cylinder and the crater where it struck the building.

Rebuffing the Russian allegation of a “staged incident”, the OPCW repeats that its mandate was not concerned with “the argument that [the cylinders] were dropped from an
aircraft — because that would be part of attribution of responsibility — and then makes clear: “The FFM stands by its report in all aspects, including those regarding conclusions as to the use of a toxic chemical as a weapon.”

But the Investigations and Identification Team could pursue the issue of an airdrop as it considers who carried out the attack. So Russia did not wait for the OPCW response before its latest step.

On May 16, Russia introduced a resolution to the UN Security Council Resolution, seeking to restrict the OPCW.

It then tried to overrule the OPCW’s creation of the Investigations and Identification Team,
insisting that the Security Council is the only international body that can impose measures on countries which violate the Chemical Weapons Convention.

A diplomat summarized both the resolution and the Russian activities since the March 1 report of the Fact-Finding Mission: “What it’s really about of course is the Russians trying to strangle OPCW.”