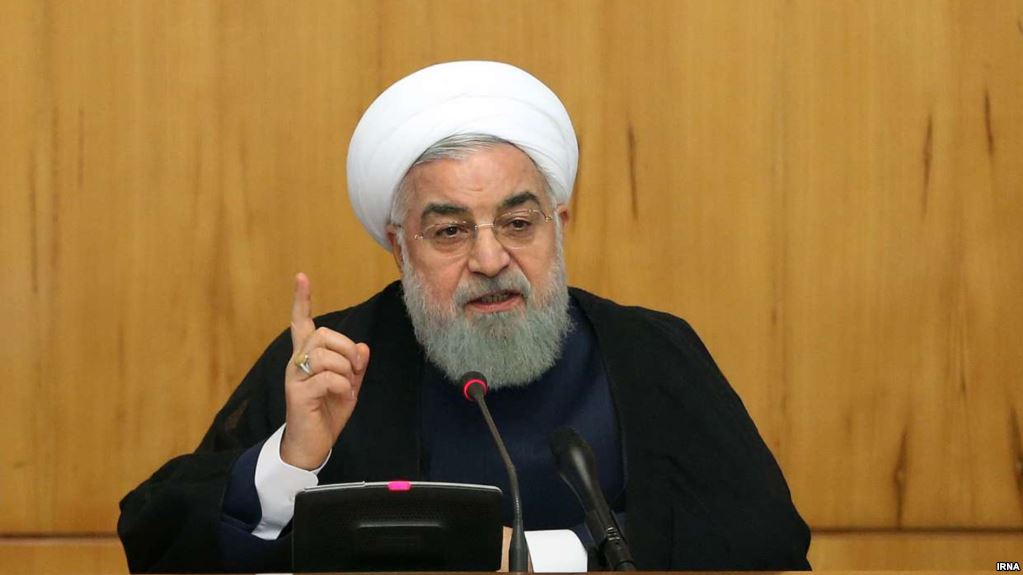 Iran has issued a 60-day deadline before it suspends part of the 2015 nuclear agreeement and restarts enrichment of 20% uranium.

Responding to the latest US sanctions and the Trump Administration’s movement of air and naval forces, President Hassan Rouhani sent the message to the international community in a nationally-televised speech on Wednesday.

Rouhani said Iran’s interests must be protected against “American hardliners, Zionism and regional reactionaries” while maintaining, “[This] “is not war, but diplomacy”.

The President’s speech was preceded by an official statement from the Supreme National Security Council. Foreign Minister Mohammad Javad Zarif issued an assurance that Iran is not leaving the 2015 agreement with the 5+1 Powers (US, UK, France, Germany, Russia, and China), from which the Trump Administration withdrew exactly one year ago.

Under the Joint Comprehensive Plan of Action, Iran suspended production of 20% uranium, which can be further enriched to military-grade 90%+. It shipped out all 20% stock to other countries.

An Appeal to Europe, China, and Russia

Rouhani said the other 5+1 Powers must protect Iran’s oil and banking sectors.

The European Union launched a limited Special Purpose Vehicle in February for non-dollar trade in Iranian oil and other commodities and goods. But Tehran rejected the mechanism because of “humiliating conditions”, such as European criticism of Iran’s missile program, activities in the Middle East, and alleged assassination and bomb plots in Europe.

China, embroiled in a trade war with Washington, is under pressure from the Trump Adminisration’s removal of sanctions waivers over oil purchases. Beijing is Iran’s top customer, taking about half of Tehran’s exports of 1.1 million barrels per day — down almost 60% from April 2018.

European officials said earlier this week, from conversations with Iranian officials, that Tehran would soon suspend some of its commitments under the deal. Rouhani wrote letters to the leaders of the remaining 5+1 Powers confirming the measure: “If the five countries came to the negotiating table and we reached an agreement, and if they could protect our interests in oil and banking sectors, we will go back to square one.”

Rouhani warned of a firm response if Iran’s nuclear case is referred again to the UN Security Council, but said Tehran is ready for negotiations: “The Iranian people and the world should know that today is not the end of the JCPOA. These are actions in line with the JCPOA.”

On May 8 2018, US withdrew from #JCPOA, violated #UNSCR 2231 & pressured others—incl #E3—to do the same
After a year of patience, Iran stops measures that US has made impossible to continue
Our action is within the terms of JCPOA.
EU/E3+2 has a narrowing window to reverse this.

The European trio of the UK, France, and Germany have not issued an official response.

However, sources at the French Presidency said that international sanctions could be reimposed on Iran if it steps back from commitments under the deal. And US Secretary of State Mike Pompeo, in a sudden change of schedule, meets UK Prime Minister Theresa May and Foreign Secretary Jeremy Hunt in London on Wednesday.

In the past month, the US has escalated its comprehensive sanctions — imposed last November — by designating the Revolutionary Guards as a “foreign terrorist organization” and ending the sanctions waivers.

Last weekend the Trump Administration announced the deployment of a carrier strike group with bombers to the Persian Gulf.

Iran Daily, May 7: US Claims Iranian Threats to US Troops in Iraq — But Questions Surface Immediately

In a sign of the pressure on the troubled Iranian economy, its historically-low currency is sinking again. It stands at 153,500:1 against the US dollar, down about 15% from last month.