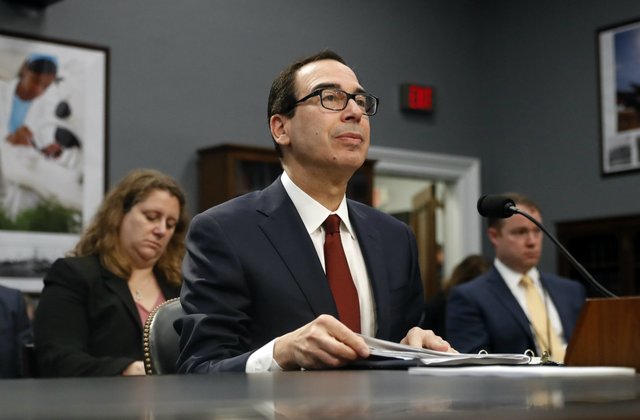 Treasury Secretary Steven Mnuchin has indicated he will shield Donald Trump against any Congressional demand for Trump’s tax returns.

Mnuchin told Congressional committees on Tuesday, “The general public when they elected President Trump made the decision to elect him without his tax returns being released.”

He insisted that Trump had complied with legal requirements by releasing a financial disclosure form.

Mnuchin acknowledged that White House lawyers contacted the Treasury about the request by the House Ways and Means Committee, made to the Internal Revenue Service, for Trump’s returns between 2013 and 2018.

The Secretary said he not personally spoken to Trump or the lawyers about the handling of the matter. He described the discussions as “informational”.

Mnuchin repeatedly declined to say how he would specifically act over the Ways and Means request, calling this “premature”, and said he would not allow politics to interfere with a decision. But he defended Trump’s line that the returns are private, leaving Democrats unsatisfied.

And he issued the veiled threat that any pursuit of Trump could set a precedent for pursuit of the opposition party: “I am sure there are many prominent Democrats who are relieved that when [Rep.] Kevin Brady was chairman of the [Ways and Means] Committee that he didn’t request specific returns.”

IRS commissioner Charles Rettig, in another House hearing room, said he and the IRS general counsel have been “interactive” with the Treasury on how to respond to the Ways and Means Committee: “There was a discussion about who is going to handle the response. There is no conclusion on that.”

Trump: “Democrats Will Never Be Satisfied”

Trump has refused to release his returns — a practice since Richard Nixon — either as a candidate or as US President. He has given the unsupported pretext that he is being audited by the IRS.

Amid ongoing questions about Trump’s conflicts of interests and possible legal violations, Ways and Means chairman Richard Neal asked the IRS to provide the tax returns by April 10.

The request followed testimony by Trump’s long-time lawyer and fixer Michael Cohen that his former boss inflated and deflated his wealth to limit taxes and insurance premiums, possibly committing fraud. The Washington Post, using material from Cohen, published an examination of Trump’s “Statements of Financial Condition” that found, “The documents were deeply flawed. Some simply omitted properties that carried big debts. Some assets were overvalued. And some key numbers were wrong.”

On Friday, Trump’s lawyer William Consovoy told the Treasury to ensure that the IRS did not hand over the returns.

White House Chief of Staff Mick Mulvaney was strident on Sunday: emocrats would “never” get Trump’s returns and were pursuing “a political hit job”.

Trump held his line on Monday:

The Democrats will never be satisfied, no matter what they get, how much they get, or how many pages they get. It will never end, but that’s the way life goes!