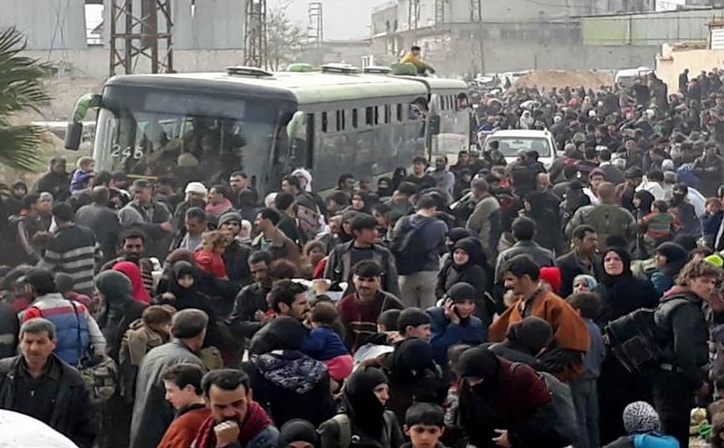 Syrians in regime-held territory are paying smugglers thousands of dollars to leave, heading for the major opposition area in northwest Syria.

Syria Direct reports on the departures as people fear arrest, intimidation, and instability. The flight counters the Assad regime’s narrative of “victory” and “reconciliation” after reoccupying all opposition parts of southern Syria last year

The smuggling routes were once used as escape routes for fighters and civilians fleeing sieges during Syria’s eight-year conflict. Now corrupt officials in the regime’s security apparatus help arrange the departures, according to activists and analysts.

Hamada Hameed, a Palestinian activist, speaks of those fleeing her native Yarmouk camp in south Damascus, “Even now, people are still leaving.”

Hameed, who was evacuated to northern Syria in spring 2018 after pro-Assad forces recaptured Yarmouk from the Islamic State, says, “Most of those arriving pay somewhere between $1,800 and $2,200 to get from South Damascus to the north…because they have security issues from the regime’s side.”

Ahmad, also from South Damascus, left on a smuggling route, “I was wanted for arrest by the security branches. Staying would have been a form of suicide.”

And Abu Muhammad, from a working-class neighborhood in south Damascus, paid $1,650 to reach Idlib Province in northwest Syria. He describes a dozen people moving house to house, usually at night, with the last part of the journey including a walk in pitch-dark towards the frontlines between regime forces and rebels.

“The fear on our faces was clear to everyone who transported us,” he says.

Residents and activists speak of the involvement of senior regime officers, including from military intelligence’s Palestine Branch, in the smuggling networks. They say that, for years, officers have taken thousands of dollars to help arrange flights.

Abu Ammar says he left southern Syria, paying about $2,500, after “false promises of security” following the regime’s reoccupation, with “targeting [of] people seen as close to the revolution through kidnapping and assassasination”.

“About two months after the last [evacuation] convoy, I was able to get out with the help of smugglers who had relations to officers and shabeeha [pro-regime] militia,” Abu Ammar explains. “[They] found us a way to the north without military or security checkpoints.”

The flights come almost exactly a year after pro-Assad forces, with months of siege and deadly conventional and chemical attacks, recaptured the East Ghouta region near Damascus.

Men speak of going into hiding after they receive summons to serve in the regime’s military. Others have disappeared, presumably arrested.

Movement is restricted, with an official letter needed to go even to the nearby capital.

Residents talk of daily loops by Russian military personnel, with little contact with civilians and no clarity on their role.

A former resident, Ramzi, says with a hint of sarcasm, “If not for them…. God, the people of Ghouta would be seeing something even [worse] than the reality they are seeing right now.”