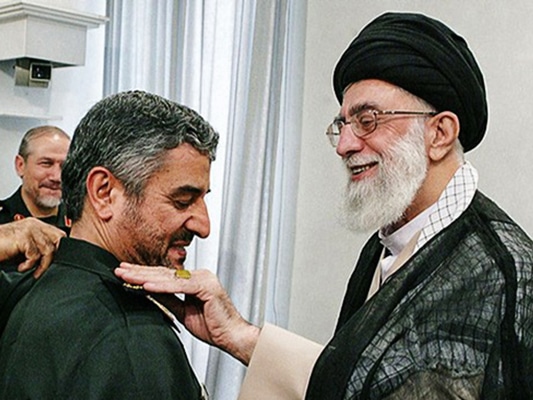 The head of the Revolutionary Guards, Gen. Mohammad Ali Jafari, with the Supreme Leader (File)

Iran’s Revolutionary Guards commanders have struck more poses over the Trump Administration’s designation of the military organization as a “foreign terrorist group”.

In separate messages to Iranian authorities and people on Tuesday, Guards commander Maj. Gen. Mohammad Ali Jafari asserted that the designation was from “vengeance and outrage” because of “back-to-back defeats” for the US in the region.

On April 8, the US Government issued the designation, the first time that Washington has labelled an entity of a foreign government as terrorist. American officials say consequent sanctions affect 11 million people connected with the Guards.

Jafari warned, just before the designation: “If the Americans make such a silly move and endanger our national security, we will implement and put reciprocal measures on our agenda based on the policies of Iran’s Islamic establishment.”

So far, there have been no substantive measures by the Guards. Iran’s Parliament has designated US military forces as “terrorist”, formally reasserting the declaration on Tuesday.

Jafari maintained his proclamation of victory yesterday as he derided the “inane and illegal measure taken by the adventuresome US President and the radicals around him”. He attributed it to “the deadly blows by the Iranian nation, and this popular revolutionary institution [the Guards], which has been a successful trailblazer in the fight against terrorism”.

Defense Minister Amir Hatami echoed the commander as he hailed the “glorious defense institution” of the Guards:

The Iranian MPs and people are aware that the Great Satan’s (US’s) conspiracies against Iran have continued over the past 40 years but we have emerged victorious with the help of God.

Today, the US seeks to infiltrate into the country’s defense system by labeling the IRGC as terrorist but this time again it will be defeated.