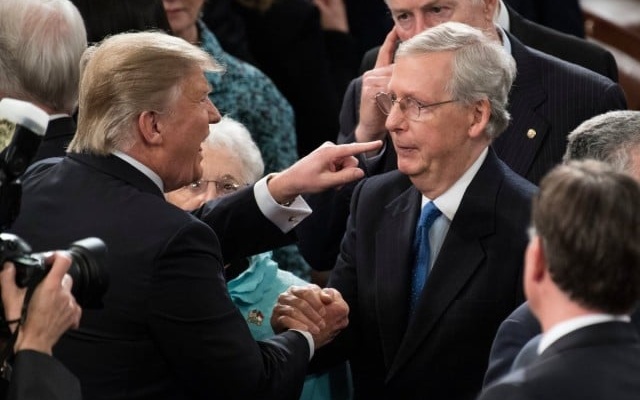 Senate Majority Leader Mitch McConnell blocks the release of the Mueller Report on Russian interference in the 2016 US Presidential election.

McConnell objected to an effort by Senate Minority Leader Chuck Schumer to pass a resolution, via unanimous consent, to publish the report.

The objection came a day after Attorney General William Barr, in a four-page letter, declared that Mueller’s 22-month investigation had found “no conspiracy” between the Trump campaign and Russian officials. Barr quashed any action over obstruction of justice by Donald Trump, despite stating Mueller had found evidence on “both sides” of the possible crime.

We’re likely dealing here with potential other prosecutions, classified information, damaging people’s reputation. There’s no evidence that the attorney general is not going to produce as much information as possible for all of us, and that’s why I objected. I think it’s a reasonable thing to do.

A similar resolution passed the House by 420-0 earlier this month. It was blocked then in the Senate by Lindsey Graham, a friend of Trump’s, who demanded the naming of a Special Counsel be named to investigate 2016 Democratic nominee Hillary Clinton.

This language was good enough for every Republican in the Senate as well as every Democrat. The President himself says [the report] should be released. It’s hard to understand why the Majority Leader should stand alone with objections no one else found to be reasonable or sustainable and oppose this resolution.

The report should be made public and the Senate should resolve that it should be.

Democrats have given Barr an April 2 deadline to turn over a copy of the report. The Attorney General is scrubbing material from the document, purportedly because it includes material from a grand jury.

Trump said on Monday that “it wouldn’t bother me at all” if the report were released. However, most of his statement was devoted to assailing Mueller’s team and supposed enemies behind the “witch hunt”.

The tactics of Trump and Republican allies, setting up for the 2020 election as well as protecting Trump from further scrutiny, are to turn Trump-Russia into an assault on Hillary Clinton, Democratic legislators, and current and former US officials.

They’ve done so many very, very bad things, evil things, I would say treasonous things against our country….

Why haven’t they been looked at?. They lied to Congress, and many of them you know who they are….

Despite Barr’s attempt to block any further investigation, there are 12 cases at Federal and State level against Trump, the Trump Organization, the Trump Foundation, the Trump inaugural committee, and other Trump-related entities.

Trump advisor Roger Stone — one of eight indicted or convicted amid Mueller’s enquiries — faces trial, while deputy campaign manager Rick Gates is still to be sentenced.