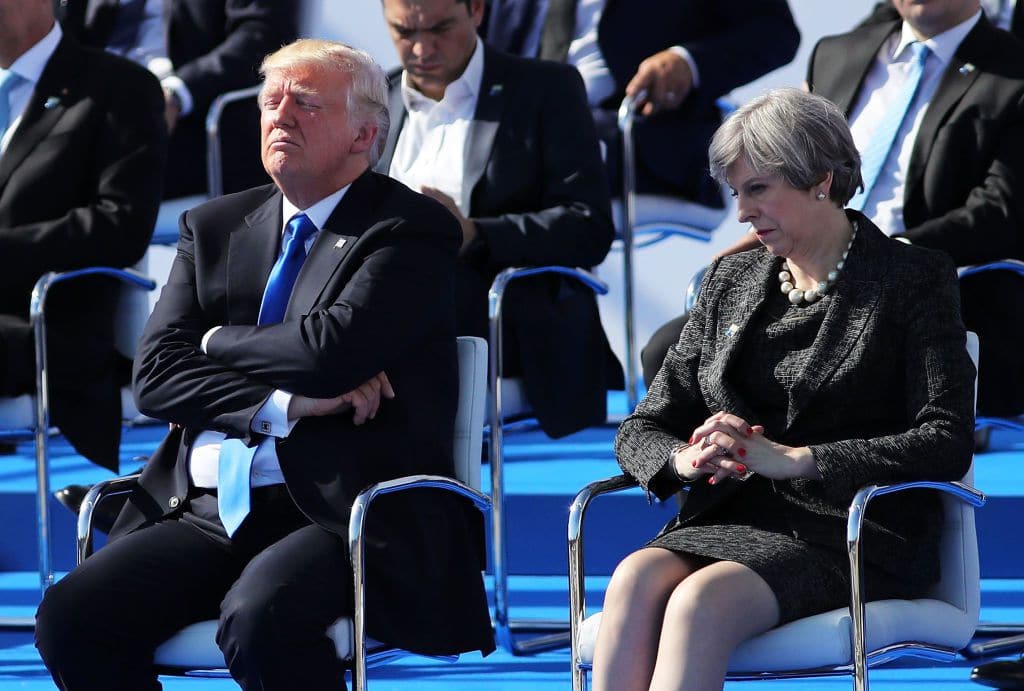 Donald Trump and British Prime Minister Theresa May at a NATO summit meeting in Brussels, Belgium, May 25, 2017 (Dan Kitwood/Getty)

Donald Trump implicitly accuses the UK Government of supporting “Russiagate”, false allegations of his links with Moscow to damage his Presidency, while he undermines Prime Minister Theresa May.

Trump sent out a message on Sunday night by retweeting William Craddick, the founder of right-wing conspiracy site Disobedient Media: 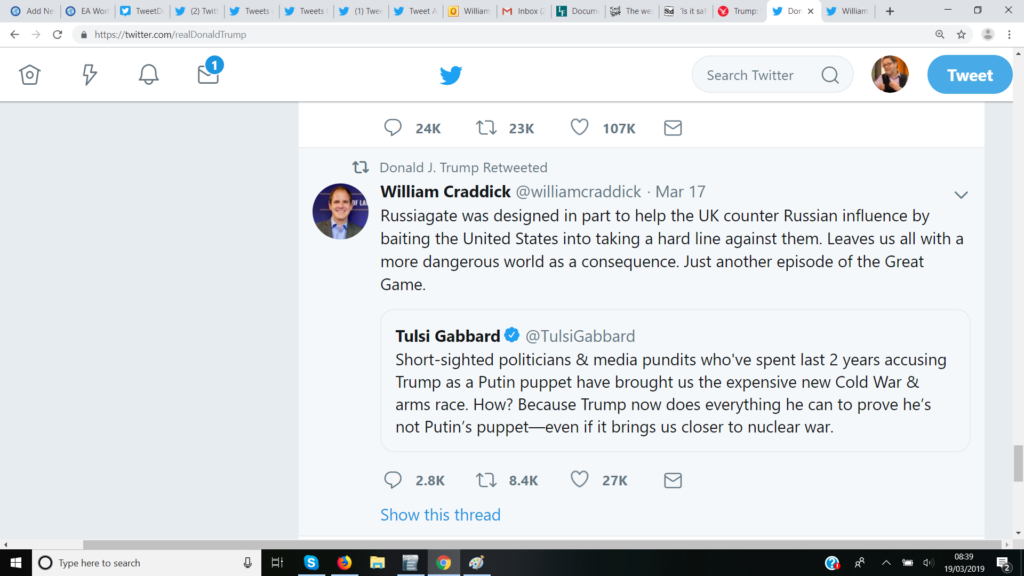 Craddick was promoting the view of Rep. Tulsi Gabbard, a Democratic candidate in the 2020 Presidential election, who has defended Trump by declaring US agencies are plotting for conflict with Moscow.

While some commenters on Twitter will retweet “without endorsement”, Trump always use the retweet to support messages and to highlight those who are supporting him.

Trump spent the weekend in Twitter blasts at perceived enemies from the late Sen. John McCain to the comedy program Saturday Night Live. He railed against the “Witch Hunt” of the investigation into contacts between his campaign and Moscow, amid Russian interference in the 2016 Presidential election.

Conservative MP Nicholas Soames, a Privy Councillor of the Queen and grandson of Winston Churchill, denounced the “foolish” and “ludicrous” conspiracy theory:

The trouble is [Trump] allows himself to be subject to these great flights of fancy, which unfortunately there are too many people who take seriously.

He pretty much takes up every conspiracy theory there is, it’s just ludicrous. I don’t think anyone who knows anything about it would take it seriously.

Last week Trump again intervened in UK politics with criticism of UK Prime Minister May as weak in Brexit negotiations for the UK’s departure from the European Union. He said she “didn’t listen” to his advice over the talks.

The criticism was a refrain of Trump’s line just before his only Presidential visit to the UK last July. He also endorsed May’s rival Boris Johnson, the former Foreign Secretary, saying he would be a “great Prime Minister”.

Before and during Trump’s visit, former chief strategist Steve Bannon set up a London headquarters to liaise with Johnson’s camp and with right-wing politicians seeking a “hard Brexit”.

Bannon echoed Trump last weekend, telling the UK’s Sky News that May is “not terribly sophisticated” and failed to heed Trump’s cautions about the discussions with the EU.

He added the jab that Nigel Farage — a hard-right British politican linked to Bannon and the 2016 Trump campaign — has more influence than May with Trump.

Bannon, who has been touring Europe pursuing influence with right-wing parties and deriding the EU, then issued the call for Johnson’s accession to power: