TrumpWatch, Day 785: Trump Issues Veto for His “National Emergency” and The Wall 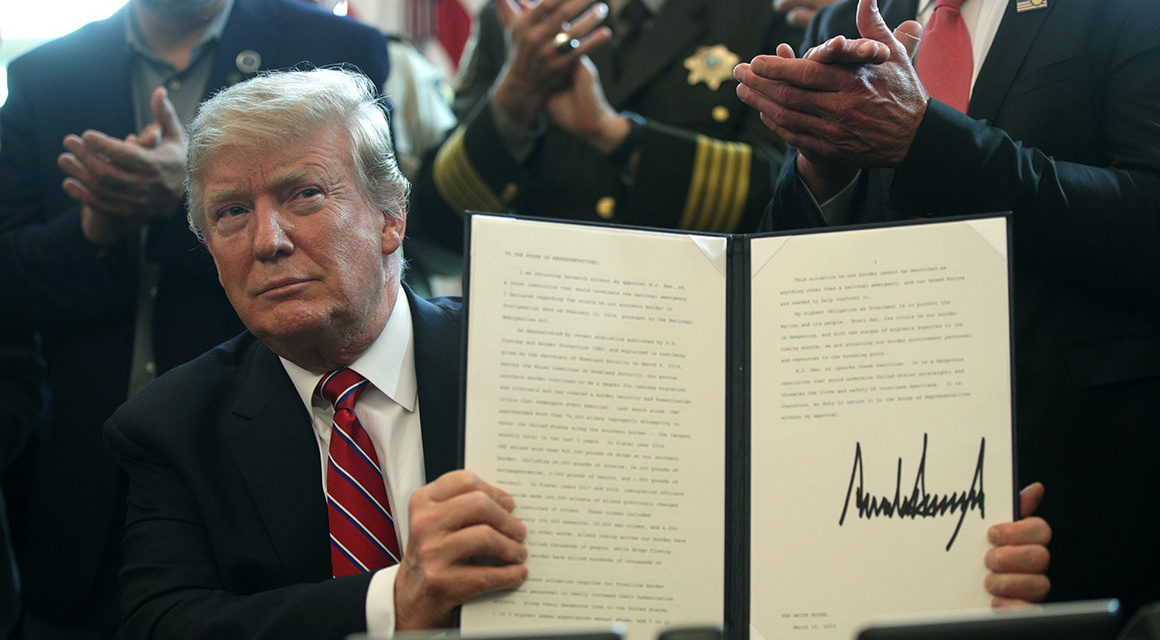 On Thursday, the Senate — with 12 Republicans alongside all 47 Democrats — joined the House in overturning Trump’s February 15 declaration. Trump resorted to the “emergency” to seize $6.6 billion in funds from other agencies, after Congress refused to allocate money for The Wall despite Trump’s record-setting 35-day Government shutdown.

Trump insisted, as he signed the veto in the Oval Office, that the Congressional resolution is a “dangerous” and “reckless…vote against reality”.

He was surrounded by Vice President Mike Pence, Attorney General William Barr, and Homeland Security Secretary Kirstjen Nielsen during the brief ceremony. Barr covered Trump by saying the emergency is “clearly authorized under the law” and “solidly grounded in law”.

Trump, already using The Wall and his hyperbole about “invasion” of the US for a 2020 re-election bid, signalled within minutes of the Senate’s vote that he would issue the veto.

Even with some Republicans opposing Trump’s position, neither the House nor Senate is likely to gain the two-thirds majority needed to override the veto.

However, the emergency declaration faces several challenges several court challenges over Trump’s seizure of funds — most of which comes from military counter-narcotics and construction projects — and of land near the border for The Wall.

Trump put out a stream of false information when he issued the declaration, including about the level of migration and movement of drugs into the US. When reporters presented Government data refuting his claims, Trump says his agencies’ information was “lies”.

On Friday, Trump put out a flurry of statistics that supposedly backed his assertions, but the claims were vague and blurred humanitarian issues with “security”.

He played down the 12 Senate Republicans who voted against the “emergency” on Thursday:

They’re doing what they have to do, and I put no pressure on anybody. I actually said, “I could have gotten some of them to come along.”…

House Speaker Nancy Pelosi responded, “The House and Senate resoundingly rejected the president’s lawless power grab, yet the president has chosen to continue to defy the Constitution, the Congress and the will of the American people.”

Anthony Romero, the executive director of the American Civil Liberties Union, looked to the court battles:

Even members of President Trump’s own party are beginning to realize that he is a one-man constitutional crisis.

The President’s veto is as meaningless as his signature on the national emergency declaration. Congress has rejected the president’s declaration, and now the courts will be the ultimate arbiter of its legality. We look forward to seeing him in court and to the shellacking that he will receive at the hands of an independent judiciary.