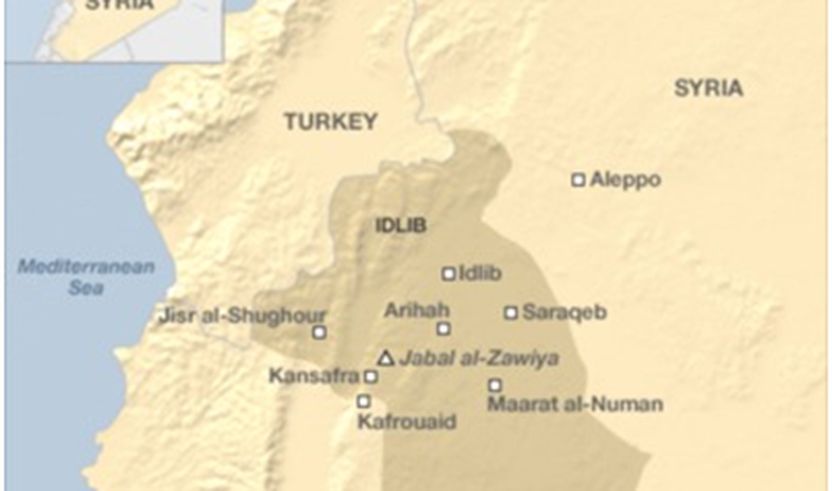 The last minutes of White Helmets rescuer Mahmoud Abdel Aal before he was killed by an airstrike, reportedly by Russian warplanes, on Idlib Province on Saturday:

Video shows the last images documented by our fallen hero Mahmoud, prior to his death, and the injury of 2 of his colleagues as a result of an airstrike by the #Russian warplanes. Secondary raid deliberately planned to hit the volunteers amidst the search and rescue of civilians. pic.twitter.com/fX021fxVyo

White Helmets teams managed to rescue an infant from under his collapsed house, after a double tap Russian airstrike targeted #Almantar town in #Idleb this evening. As a result, 2 civilians including a SCD member were killed, and 6 ppl got injured, including 2 other volunteers. pic.twitter.com/ic9BRG3IhB

Journalist Hadi al-Abdallah reports from the scene of regime airstrikes on medical clinics and civil defense centers, including in the town of Saraqeb:

Russia has reportedly bombed inside opposition-held Idlib Province in northwest Syria, breaking its own demilitarized zone.

The strike, which killed one White Helmets rescuers and wounded others, was on Saturday near the city of Jisr al-Shughour in northwest Idlib. It came a day after Turkey said Moscow and Ankara had begun complementary patrols of Idlib to prevent clashes between pro-Assad and rebel forces.

Syria Daily: Turkey and Russia Patrols in Idlib — Will They Stop Regime Attacks?

#Syria: video showing powerful #Russia|n airstrike on Muntar (SE. of #JisrShohur), among the very 1st targets bombed by #RuAF. Village was hit by a double tap which killed at least one 1st rescuer & wounded others. https://t.co/ILSB6tqrSU pic.twitter.com/kd1jpyKOdP

The head of the White Helmets, Raed Saleh, said a volunteer was killed in a “double tap” attack, in which rescuers and others are targeted in a follow-up strike as they respond to the first bomb.

The attacks were on towns such as Saraqeb. A child was reportedly killed, with “many people” wounded.

Among the targets were medical clinics and civil defense centers.

The demilitarized zone was announced by Turkey, which has troops alongside rebels in the northwest, and Russia last September.

The Assad regime’s forces have regularly shelled the area despite the declaration. They stepped up the attacks in February, killing at least 47 people — most of them women and children — in a 10-day period.

Hardline jihadists retaliated in northern Hama with an attack on a regime checkpoint, reportedly killing at least 25 troops. Despite the Turkish declaration of the complementary patrols, there was more regime shelling and clashes on Friday.