TrumpWatch, Day 769: How Much Trouble for Trump After Cohen Testimony? 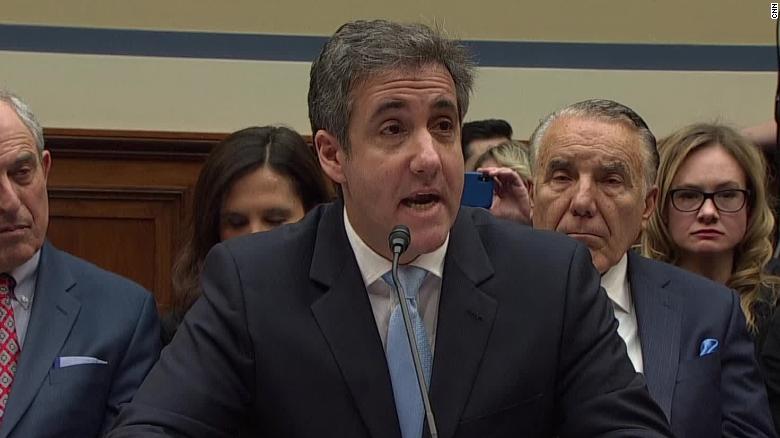 In a detailed account, supported by documents, Cohen portrayed Trump as a “conman” and “racist”. He specifically linked Trump to the crime of a payoff to Stormy Daniels in October 2016, over her claim of a 2006 sexual encounter with Trump. He spoke of Trump indirectly ordering him to lie to Congress over negotiations for a Trump Tower Moscow, said Trump knew in advance about WikiLeaks dumping e-mails — obtained by Russian military intelligence — trying to damage Hillary Clinton, and asserted that Trump supported a June 2016 meeting between his top advisors and three Kremlin-linked envoys.

Cohen also pointed to possible criminal charges by federal and state prosecutors over Trump’s financial activities, including those of his Trump Foundation and the Trump Organization. Asked for testimony related to those matters, the former lawyer said he could not comment because of the ongoing investigation.

“Is there any other wrongdoing or illegal act that you are aware of regarding Donald Trump that we haven’t yet discussed today?” Rep. Raja Krishnamoorthi asked.

“Yes, and again, those are part of the investigation that’s currently being looked at by the Southern District of New York,” Cohen responded.

The fixer portrayed Trump as a liar and a bully who issued threats “500 times” against those who upset him. He spoke of threats by Trump, including on Twitter, against him and his family, saying he was so concerned that he would not walk alongside his wife and children in public.

Cohen, who postponed two previous appearances before Congressional committees citing Trump’s threats, said he was motivated to appear in part because of fear that if Trump were to lose the 2020 election, “there will never be a peaceful transition of power”.

As dramatic as Wednesday’s testimony was, Cohen’s presentation indicated it is only a fragment of his evidence against Trump. The lawyer, who served Trump for more than a decade, testified for eight hours behind closed doors on Tuesday to the Senate Intelligence Committee, and joins the House Intelligence Committee in private session on Thursday.

With the exception of Rep. Justin Amash, Republicans on Wednesday did not ask Cohen about Trump. Instead, echoing the strategy of the White House and Trump’s allies, they tried to discredit the witness as a liar and convicted criminal.

But Cohen held his line, admitting repeatedly that he had erred in the past and apologizing to his family and the committee. He depicted Trump as the boss who demanded loyalty, covering up illegal activity.

Cohen explained that Trump may have committed fraud by inflating his assets to make the Forbes list of the world’s wealthiest and then deflating them for tax purposes. He supported the allegation with documents.

Trump, in Vietnam for a failed summit with North Korea’s Kim Jong-un, lashed out on Twitter:

Michael Cohen was one of many lawyers who represented me (unfortunately). He had other clients also. He was just disbarred by the State Supreme Court for lying & fraud. He did bad things unrelated to Trump. He is lying in order to reduce his prison time. Using Crooked’s lawyer!

STATEMENT on Michael Cohen testimony to Congress: WikiLeaks publisher Julian Assange has never had a telephone call with Roger Stone. WikiLeaks publicly teased its pending publications on Hillary Clinton and published > 30k of her emails on 16 March 2016. https://t.co/XcH75u3kbu

Stone, indicted in January in part over the WikiLeaks case, said, “Mr. Cohen’s statement is not true.”

Cohen would not go as far as saying that Trump colluded with Russia. However, his testimony on individual matters related to Moscow portrayed a link and he emphasized that Trump repeatedly told him to put out the line, “Michael, there’s no Russia, there’s no collusion, there’s no involvement, there’s no interference.”