Iran Daily: Europe Launches Economic Link with Tehran — But It is Limited 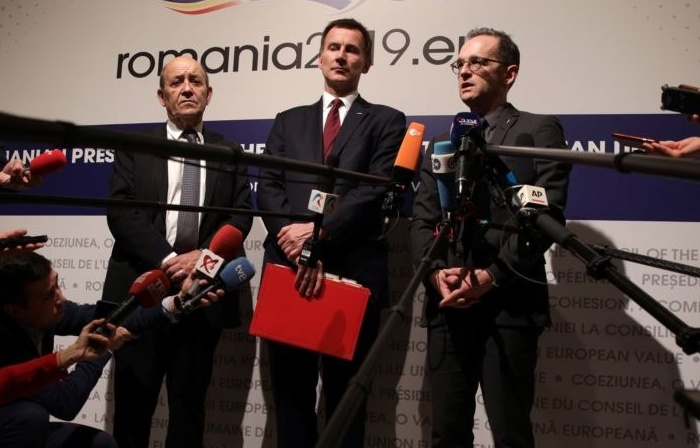 After four months of negotiations, the European Union has launched a Special Purpose Vehicle for non-dollar trade with Iran, bypassing US sanctions.

However, the SPV is limited, covering only a targeted set of products in the first instance and setting conditions on the Islamic Republic.

The foreign ministers of the UK, France, and Germany announced the launch of the mechanism, which provides for Europe-Iran trade in oil and other commodities and goods, “to preserve the nuclear deal” of July 2015 between Tehran and the 5+1 Powers (US, UK, France, Germany, Russia, and China).

“It is a political act,” French Foreign Minister Jean-Yves Le Drian said after a meeting of EU foreign ministers in Bucharest, Romania. “It is a gesture to protect European companies.”

The EU statement says the limited mechanism will require “work on concrete and operational details”, including disucssions with Iran on its corresponding mechanism, which could take months. The Europeans also emphasized that Iran must accede to an international convention on terrorist finance and money laundering, joining the Financial Action Task Force.

Iranian hardliners have blocked the Rouhani Government from completing the accession, arguing that it could disrupt Tehran’s links with groups such as Lebanon’s Hezbollah and Palestine’s Islamic Jihad. The measure is currently being reviewed by the Expediency Council, which resolves disputes between branches of the Iranian regime.

“More Work To Be Done”

UK Foreign Minister Jeremy Hunt said Thursday: “Registration is a big step, but there is still more work to be done.”

He added, “This commitment does not in any way preclude us from addressing Iran’s hostile and destabilising activities,” including in the Middle East.

Despite the limits, Iranian Deputy Foreign Minister Abbas Araqchi said that the mechanism is a good first step.

The Rouhani Government has made links with Europe a priority in its attempts to shore up Iran’s crippled economy and bypass comprehensive US sanctions, imposed on November 5 after Donald Trump withdrew the US from the nuclear deal in May.

But earlier this month Iranian officials indicated they had given up on the EU and warned that Tehran could withdraw from the nuclear agreement. Foreign Ministry Bahram Qassemi repeated the warning on Wednesday.

Iran Daily, Jan 31: Tehran to Europe — We Could Withdraw from Nuclear Deal

A US State Department spokeswoman said, “We do not expect the SPV will in any way impact our maximum economic pressure campaign.”

And “a senior Trump administration official” declared, “The United States questions the efficacy of the SPV and remains committed to fully enforcing its sanctions.”

A “European diplomat” maintained, “It won’t change things dramatically, but it’s an important political message to Iran to show that we are determined to save the JCPOA [nuclear deal] and also to the United States to show we defend our interests despite their extraterritorial sanctions.”